Fatorda: Scoring once in each half, Sesa Football Academy registered a well deserved 2-1 win against Salgaocar FC in the GFA Under-14 Football League match played at artificial grounds, Fatorda on Wednesday. The teams were level 1-1 at half time.

Nishar Rehman gave Sesa FA the lead in the 25th minute and Salgaocar restored parity on a counter through striker Clarie Fernandes in 26th minute.

The match winner for Sesa FA was scored in the second minute of extra time by DS Zimik Maring through a deft placement.

Both the teams fought a close battle from one end to the other and it was only due to the slackening of pace by Salgaocar FC during extra time that allowed Sesa FA capitalised to score the winner.

Nishar Rehman and Richard D’Costa played a major role for Sesa FA to take the ball forward and attack the rival defence with gusto.

Savio Peixote and Jones Quadros gave a good account of themselves for Sesa FA in the back four while Zimik Maring and Nishar Rehman kept on harassing the Salgaocar FC defence time and again.

Sesa FA went into the lead when Nishar Rehman sent a scorching shot from the edge of the rival box off a neat pass from Mo Sahil.

Salgacoar FC retaliated very quickly and levelled the score through Clarie Fernandes off a great pass from Elden Fernandes. As the match looked heading for a draw, Sesa FA scored the match winner in the add on time of 70+2 minutes of play through Zimik Maring after he cleverly drew out the Salgaocar FC keeper . 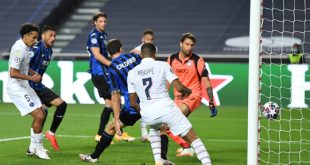 Ozil vows to give his everything for Arsenal