The officials of the MPT, Indian railways and Real Group of Companies pose with the relief materials at Vasco railway station on Thursday afternoon

Speaking to this daily, Coutinho told that a special permission has been obtained by the MPT chairman I Jeyakumar from the district collector based in Tamil Nadu Dr Umakant to dispatch the flood relief materials, containing water bottles provided by the Real Group of Companies recently.

“The MPT chairman Jeyakumar took the initiative and contacted the Real Group of Companies to provide water bottles which will be sent through Chennai Express passenger train to the floor affected areas”, said Coutinho and added that the Indian railways have made the transport arrangement free of cost as per the directions issued by the central government to the South Western Railway’s for transporting the relief materials to the floor affected areas in Tamil Nadu state.

The manager and the in charge of the Real Group of Companies Haldankar said, “It was our moral responsibility to provide relief materials to the flood affected people by providing some kind of help which will be useful to the people in a great way”.

The station manager Vasco railway station Chacko said that the Indian railways have provided free transport facility to carry the relief materials to the floor affected victims in Tamil Nadu.

“It is a first time free transport service provided by the Indian railways from Vasco railway station to the flood affected people in Tamil Nadu”, said Chacko and have felt very proud to provide helping hand to the victims who were in distress, following the flood in various regions of Tamil Nadu.

He disclosed that the train would reach Chennai on December 18. 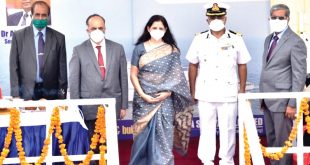