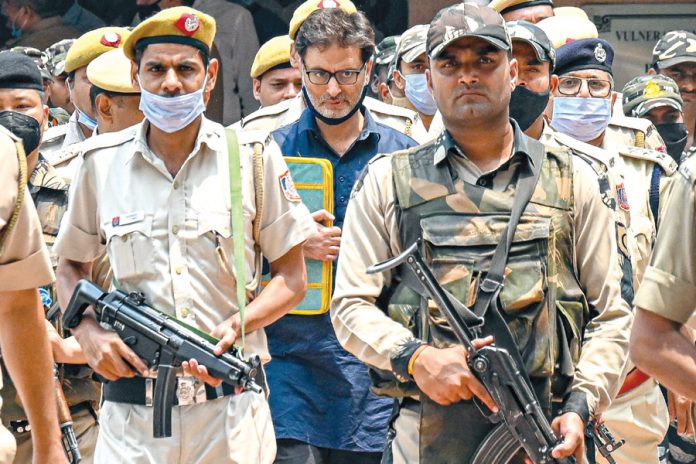 New Delhi: A Delhi court on Wednesday awarded life imprisonment to Yasin Malik, one of the foremost separatist leaders, in a terror funding case, saying the crimes committed by him struck at the “heart of the idea of India” and were intended to forcefully secede Jammu and Kashmir from Union of India.

Special Judge Praveen Singh awarded varying jail terms to Malik for offences under the stringent anti-terror law – Unlawful Activities Prevention Act (UAPA) and the IPC, rejecting the National Investigation Agency’s (NIA) plea for capital punishment. He said the crimes for which Malik was convicted were of very serious nature.

“These crimes were intended to strike at the heart of the idea of India and intended to forcefully secede J&K from UOI. The crime becomes more serious as it was committed with the assistance of foreign powers and designated terrorists. The seriousness of crime is further increased by the fact that it was committed behind the smokescreen of an alleged peaceful political movement,” the judge said.

The maximum punishment for such an offence is death penalty. The life term was awarded for two offences – Section 121 (waging war against government of India) of IPC and Section 17 (raising funds for terrorist act) of the UAPA.

According to the Supreme Court, life imprisonment means incarceration till the last breath, unless the sentence is commuted by the authorities. However, the authorities concerned can review the punishment only after a minimum of 14 years of imprisonment has been completed, senior advocate Vikas Pahwa said.

In a 20-page order, the judge said the crimes for which Malik has been convicted were of very serious nature. The judge, however, noted that the case was not the “rarest of rare”, warranting death penalty.

The judge said the manner in which the crimes were committed was in the form of conspiracy whereby there was an attempted insurrection by instigating, stone pelting and arson, and a very large-scale violence led to the shutting of the government machinery.

He, however, noted that the manner of the commission of crime, the kind of weaponry that was used, led him to a conclusion that the crime in question would fail the test of rarest of rare case as laid down by the Supreme Court.

The court was under a heavy security blanket through the day with police and paramilitary forces standing guard. Before Malik was brought into the courtroom, personnel from the NIA, the anti-terror federal agency, pressed into service sniffer dogs and conducted a thermal scanning.

After the pronouncement of the sentence, a group of people raised the Indian tricolour and shouted slogans against Malik outside the court premises. Parts of Srinagar observed a shutdown ahead of the court’s order.

While awarding life imprisonment under Section 17 of the UAPA, the court said financing is the backbone of any operation including terrorist activities. “In the present case, the order on charge specifies how funds were raised and how they were received from Pakistani establishment as well as designated terrorist Hafeez Saeed and through other hawala operations. It is these funds that were used to create unrest where under the guise of public protests, paid terror activities of stone pelting and arson at mass scale were committed,” the judge said.

He noted had there been no such funding for the convict to conspire to commit these acts and to pay the perpetrators, the violence and mayhem at this scale could not have been committed. “Therefore, in my considered opinion, it is high time that it is recognised that terror funding is one of the gravest offences and has to be punished more severely,” the judge said, while also imposing a fine of Rs 10 lakh on Malik.

On NIA’s submission that Malik was responsible for the genocide of Kashmiri Pandits and their exodus, the judge said, “I find that as this issue is neither before this court nor has been adjudicated upon and thus court cannot allow itself to be swayed by this argument.” “I accordingly find that this case does not call for awarding death sentence as demanded,” the judge said, rejecting the NIA’s plea for capital punishment.

During the hearing, Malik contended he had given up violence in the year 1994. “After the ceasefire in the year 1994, he had declared that he would follow the peaceful path of Mahatma Gandhi and engage in a non-violent political struggle. He has further contended that since then there is no evidence against him that in the last 28 years he had provided any hideout to any militant or had provided any logistic support to any terrorist organisation,” the court noted from Malik’s submission.

Malik told the court he had met all the prime ministers since the time of V.P. Singh till Atal Bihari Vajpayee who engaged with him and gave him a political platform.

“Government of India had provided him all the platforms to express his opinion in India as well as outside, and government cannot be considered to be a fool to give an opportunity to a person who was engaged in terrorist acts. He has further contended that it has been alleged that he was engaged in acts of violence in the valley post the killing of Burhan Wani.  However, immediately after the death of Burhan Wani, he was arrested and remained in custody till November 2016. Therefore, he could not have engaged in violent protests,” the judge said.

On Malik’s submission that he gave up the gun in 1994 and, thereafter, he was recognised as a legitimate political player, the judge said, “In my opinion, there was no reformation of this convict.”

“It may be correct that the convict may have given up the gun in the year 1994, but he had never expressed any regret for the violence he had committed prior to the year 1994. It is to be noticed that when he claimed to have given up the path of violence after the year 1994, the government of India took it upon its face value and gave him an opportunity to reform, and in good faith, tried to engage in a meaningful dialogue with him, and as admitted by him, gave him every platform to express his opinion,” the judge said.