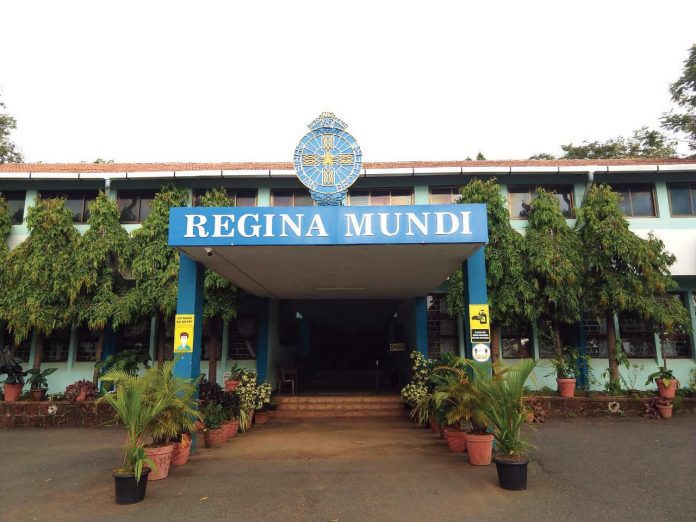 The Regina Mundi school is set-up on a 40,000 square metre plot atop Chicalim Hill. It is Communidade property.

It once commanded views of the Zuari River to the north, the harbour to the west and the Arabian Sea to the south. The plot was composed of laterite rock and was totally infertile. The plot was offered to the Presentation Sisters in 1957 if they would build a school on it. Truth to tell, it was a most unsuitable place for a school as it was five kilometres from Vasco, had no motorable road and was without electricity and water. The Presentation Sisters came to Vasco in 1958 but by 1969 they had not acquired the Chicalim plot. They bought a plot on the Mangor Hill and relinquished all claim on the Chicalim plot.

Meanwhile, a 42-foot pillar was erected on Chicalim Hill and a six-foot statue of Madonna and Child was placed upon it. The Enclosed Carmel Sisters, to whom the statue was first given, occupied the contiguous property. A latticed wall was erected to enable the Sisters to view the inauguration of the statue on May 31, 1960, which was then the feast of Mary Queen of the World (Regina Mundi). From then, the site was known as Regina Mundi. Due to the non-user-friendly terrain, the monument was difficult to access. Many of the Chicalim villagers were even more anxious to have a religious order come and open an institution on the hill and make the monument more accessible.

The land was offered to the Christian Brothers in 1969. At the time the Brothers were negotiating to open a school in Vasai, Maharashtra. However, in March 1971, a lengthy telegram from Antonio Mascarenhas was received in the Provincial Headquarters, Calcutta. He urged the Brothers to open a school in June and stated that he would provide temporary classrooms. Accordingly, I was sent to Goa almost immediately. While I was travelling across the country, a letter arrived in HQ, unknown to me, calling off the deal.

I arrived in Goa on March 31 and discovered that no arrangements had been made. Mascarenhas started building temporary classrooms in Miraton Gardens, Chicalim a little colony he was developing off the Airport Road at Chicalim. I set about getting NOCs from church and government, getting school furniture made, interviewing prospective parents and pupils and searching for teachers.

Meetings were convened with parents who were encouraged to give their opinion and advice. Transportation of pupils posed a big problem as buses between Vasco and Bogmalo, plied twice a day.

Accordingly, an old carreira was acquired and refurbished. Our clerk, J M Rozario, possessed a Fiat 1500, and he agreed to ferry some small boys to and from the Harbour daily.

Brothers Lenny Lobo and Carmo Noronha had just finished their novitiate training. They arrived in Goa on Sunday, June 6, 1971.  The next day we started classes in Miraton Gardens, Chicalim. Regina Mundi School was born. The staff consisted of three Brothers, Antoinette Nazare, Merlyn Pinto, Lumen Carvalho and our clerk, Rozario. There were 47 pupils spread over classes one to seven. By the weekend there were 74 pupils. And the number kept growing.

The communidade made over the Chicalim plot to the Brothers on December 22, 1971. The foundation stone was laid near the Regina Mundi monument, by then Archbishop F X de Piedade Rebello on January 16, 1972, the feast of St Joseph Vaz. The pupils commenced classes in the still incomplete buildings in June 1973. They brought with them the homely spirit which had been engendered in Miraton Gardens. May God shower blessings on all those who encouraged us in our first endeavours, and continue to do so – our Brothers, teachers, staff, pupils, parents, supporters and
well-wishers.

(The writer is the founder principal of the Regina Mundi School, Chicalim)