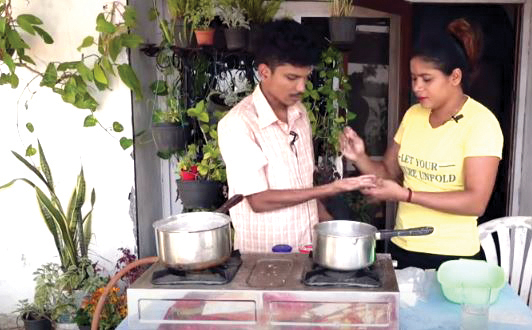 ‘Kuznantlim Zogddim’, a television show from CCR TV made its debut on February 4, 2021. From the hilarious first episode on how to make an omelette to the eleventh one, with instructions to make the Goan ‘kodi’ (curry), this presentation has been enjoyable and full of fun. They also tell you how to prepare the dishes in a simple manner.  Some of the dishes featured are ‘polle’, ‘teizan’, ‘bhenneanchi bhaji’, chapatti, and others.

Featuring the versatile Meena Goes and talented comedian Julius Mesquita, the series has been quite popular with the Konkani speaking audience. “CCR TV asked me to present some episodes on simple cooking, especially for people who live alone and are unable to cook even simple dishes. So, this serial was introduced and we are happy, we have managed to complete 11 episodes,” says Goes. The actress has come up with her own ideas and script, while some of the dialogues are spontaneous, exactly how bickering occurs between a husband and wife in their homes, especially, when the husband has no idea about cooking and is out of work. The tussles are quite funny and the two vibe well. While most of the episodes have crossed more than 10K views, the fourth one, which aired on February 25, and showed the audience how to fry ‘lepo’ (sole fish) has crossed one lakh viewers. A very deserving appreciation to this enjoyable series, that makes the viewer laugh while learning a few simple things, in cooking. This one is a must-watch and Goes and Mesquita deserve compliments for their performance and presenting something that is quite funny and good to watch.