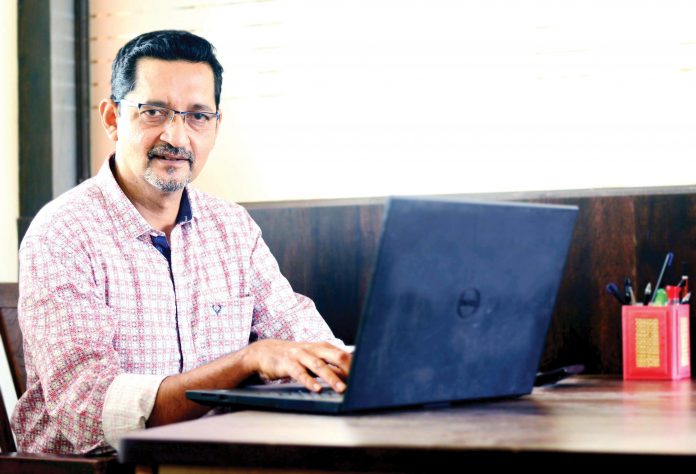 Sometimes along life’s journey one can benefit from listening to advice from others on how best to confront the travails on the path, plan for future and achieve goals in life. And with the pandemic throwing up new challenges, the motivation to stride forward has taken a hit. Thus, to try and get people, especially the youth out of this slump, and reinject a sense of purpose to life, Oscar Braganca De Melo began his YouTube series ‘Driven’ in mid-2020.

An associate professor in the department of commerce at St Xavier’s College, Mapusa, De Melo who is a cost accountant and company secretary, has many qualifications to his name, including holding a PhD. And he believes that education is not just about learning but also sharing these learnings.

“I was not an extraordinary student or a prize winner. For me it was just about staying put, being perseverant and putting in daily effort,” he says.

And thus, drawing from his learnings about life and from reading voraciously about the lives of other successful people, De Melo’s ‘Driven’ consists of nine-10 minutes long episodes on various themes ranging from self-worth, honesty, humanness, tenacity, etc.

Having been involved for the last three years in the Shape Your Future programme initiated by assistant professor, psychology, St Xavier’s College, Mapusa, Fr Ramiro Luis as part of the career guidance provided by the College, De Melo used to give talks to class 10 students on making the right choices to achieve success. And the idea of the ‘Driven’ series was born from there. “In July last year, Fr Ramiro asked me to prepare one or two videos just to help people, especially the youth who were feeling frustrated during this pandemic,” reveals De Melo, who felt that as he was entering his 25th year of service as a professor, and 50th year of life, this could be a good way to give back, both, to the profession and to society. And thus, he decided that rather than just doing a couple of videos, he would do 52 episodes for the whole year.

Having begun in July 2020, De Melo has since been releasing an episode every week at 9:30 p.m. on Saturday on his channel. The shooting of the series first began in Fr Mariano Silveira’s studio in Thivim. Two of De Melo’s students, Carlton Pereira and Alexson Pinto then stepped forward to do outdoor shootings at different locations around Goa. During the lockdown, however, they conducted the shooting at De Melo’s residence.

The themes that De Melo covers are usually based on feedback he receives from people with regards to what they would like him to talk about. He then spends about two or three hours a day researching on the topic, and finding a story that can highlight this better.

Among the topics he has covered recently include learning how to handle stress and trials from the silent generation, ie people in the age group of 1928 to 1945. “Our parents or grandparents faced adversities like World War 2, Goa’s struggle for Liberation. And they never had amenities like electricity or internet but they managed. They lived their lives. We have to learn from them. Let us not feel that the world’s biggest curses have fallen upon us or else there is no hope for any of us,” he says.

And there is a need for people to not use the pandemic as an excuse to not work on themselves, he states. “I keep telling my students that if by the end of this pandemic, you have not picked up a new skill, then you can be sure you never lacked time, you lacked discipline,” he says, adding that people will never improve if they keep wallowing in self-pity because of the pandemic.

And while his initial plan was 52 episodes, De Melo now states that he wants to continue to put out more episodes, perhaps go up to 70. “Sometimes I am amazed by how I have found so many topics so far,” he admits, adding that the whole exercise has also been a life lesson in perseverance for him, as he has to put out an episode every week. “There were times when it was tough to meet the deadline but I had a promise to keep with my audience and so we always managed to do so. Also, if I stopped and took a break, I know it would be difficult to gain back the momentum,” he says, adding that he is constantly looking at how he can incorporate his observations, be it by reading, listening to people, watching television, etc, into an episode for ‘Driven’.

“I’m not too bothered about viewership,” he adds. “If one person can pick something up from my series that will help him grow to be a better human being, if I can even touch one life, then the purpose is served.”