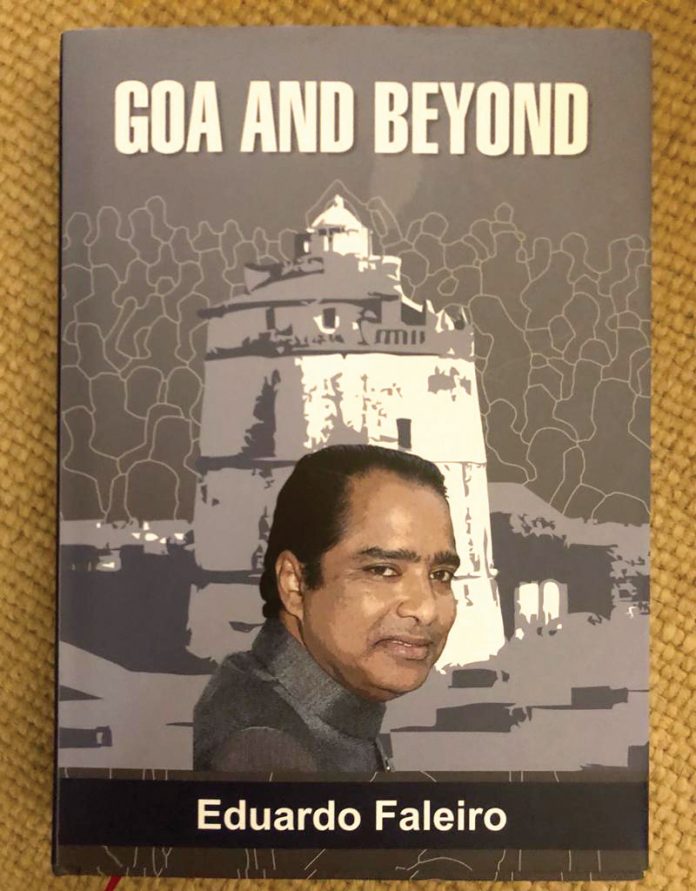 Eduardo Faleiro is a father figure to most Goans: a cherished and respected personality. During his political career which spanned five decades, the former Union Minister has left an indelible imprimatur on the national scene, representing Goa as he did in the highest stratospheres of government. His portfolios have counted External Affairs, Finance, Oceans, Electronics, Chemicals and Fertilisers, among others.

The expertise he acquired in office has spilled over into columns, speeches, judgements and advice: recently coalesced and chronicled in a 400-page volume entitled “Goa and Beyond”. Divided into eight sections, his viewpoints address the MOI language and NRI issues in Goa, as well as various aspects of international relations and his vision for the Congress Party. The underlying and recurrent theme throughout stresses the importance of unity and universal solidarity as indispensable principles to steering the ship of state on a
robust course.

Even today, at the age of 80, Faleiro is a passionate and pioneering politician. His mind is forever lucid:  he is the impeccable intellectual in all his analyses; he is always the consummate lawyer with the scissor-sharp perspective. What affects Goans and their lives has constituted – and continues to constitute – an intrinsic part of his disposition. He immerses himself in questions which affect the Goan diaspora, striving to open opportunities for Goans within the state and around the globe. He worries about the quality of education provided to our youth, the need to refine health facilities in rural Goa and the importance of special medical camps which will deliver free check-ups to the poorest citizens. He has campaigned for Konkani to be recognised as an official language and was the motivating force behind the return of gold belonging to Goans, which the defeated Portuguese regime had transferred to a national bank in Lisbon prior to its departure. He contends that there is no need to smear an entire race because of the errant behaviour of some of its leaders or citizens: he looks to nations in both the East and the West to partner with India in economic and political development. “Progress is possible only through harmony and a widespread sense of commonality,”
he contends.

Penetrating, persuasive and pungent, fastened together by a plethora of facts and details, the book scrolls across a vast canvas of subjects with local and international ramifications. There is a refreshing candour about them: Faleiro has the capacity to call a spade a spade without indulging in convoluted explanations: a veneer of diplomatic complaisance softens the trenchancy of his legal arguments. One reason why Doordarshan, in its Viewers Survey in the 90’s, voted him the country’s most articulate and affable minister.

In course of the book, the good “dotor” diagnoses myriad issues and prescribes cures for the nation from his perspective. His opinions are valid as guideposts even today, given his farsighted and judicious approach to good government. For example, he decries the mega construction projects which have transformed the coastal belt of Goa into crowded, teeming hubs – thus forever destroying the idyllic rural paradise of yore. The urgent disposal of garbage has taken on crucial importance as it yet has to be tackled in a scientific and consistent manner, he argues. Faleiro expresses grave apprehension about the influx of outsiders who have usurped large parcels of Goan land to carve out their own domain while offering little in return to the state or its people. In their wake, they shepherd in drugs, an abhorrent and riotous night life, arrogant and offensive public behaviour. Thus they insidiously and savagely strike at the original culture and fabric of Goan society, slowly dismembering its susegado, gentle and
cordial existence.

Faleiro believes that all migrant workers must be registered in the panchayats and municipalities: it should be made compulsory, he insists. He condemns the resurgence of religious extremism and organisations in the state which promote communal discord and harmony. He rails against the presence of casinos in the state, and censures all those ministers who had initially promised to eradicate them, only to do a complete volte-face once they were elected. He asks whatever happened to the promises proposed by some politicians in an attempt to ensnare votes: among them, the need to procure Special Status for the state from the Centre. He is convinced that Special Status is imperative to preserving Goa’s legacy and heritage as well as its future progress: he reveals that Rajiv Gandhi had promised him personally to look into the matter before the late Prime Minister was brutally assassinated. Faleiro has wise words for the Congress party even today, after innumerable election routs. Politics is ephemeral, he observes, and history has clearly indicated that the political pendulum swings from one end to the other over time. Every political party in Goa has had defectors and opportunists in their ranks. It is nothing new, he adds. But if a party remains united and sticks to its unique principles, the day will eventually come when they will be back in the
saddle again.

He embraces closer ties with Brazil and Japan, and underscores the need to build vigorous bridges to all of Africa as well as our neighbours in Southeast Asia. He bemoans American “dadagiri” in the Middle East, and scorns their extravagant game of imperialism, be it in Iraq, Libya or Iran. He openly fears for the Palestinian cause, which is even now suffering grievously at the hands of an extremely aggressive Israeli government. His tough stance softens when he recalls Mrs Gandhi and expresses admiration for her for standing down after being defeated in the elections. He also heaps praise on two illustrious sons of the soil, whose many actions have positively impacted Goan society and culture:  journalist and writer Lambert Mascarenhas and Dr Alvaro de Loyola Furtado, the leader of the United
Goans party.

For this elder statesman, it is the truth as he sees it that matters. Faleiro’s sweeping and persistent dream is that India stands tall in the international community of nations. After all, he has worked ceaselessly to that end.

Agriculture and trade in pre-Bahamani Goa