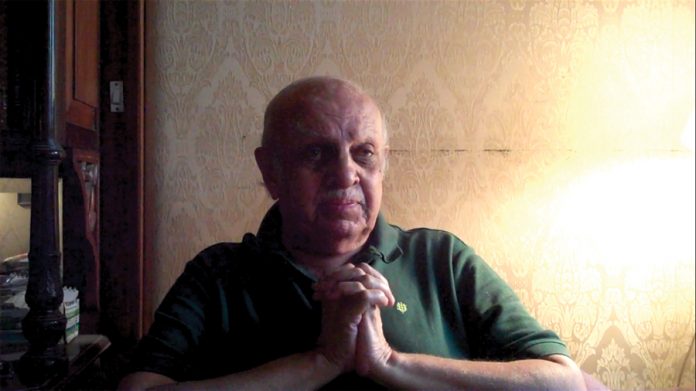 The celebrated Indian composer Vanraj Bhatia passed away on May 7, just a few weeks shy of his 94th birthday.

In January 2013, I made a trip to Mumbai to attend a few concerts at the NCPA (National Centre for the Performing Arts), but the main reason was to interview him for an article I was writing for the UK-based opera music magazine ‘Opera Now’.

I vividly remember that evening on January 23, 2013 when I caught a cab and arrived at his Napean Sea Road residence, a little apprehensive, not knowing what to expect or how I would be received.

But once he grasped the purpose of my visit, he received me warmly. He bade me sit on one of the upholstered armchairs in his stuffy living room cluttered with doily-covered furniture and bric-a-brac from a bygone era.

“Will you have a drink with me?” he asked. It was a little early for one, but he waved that objection away. “What sort of Goan are you?”

And so began the three-hour interview, some of which I videotaped with his permission. Bhatia was in the middle of writing the final act of his three-act opera ‘Agni Varsha’, based on a play by Girish Karnad.

He told me of the difficulty in finding a librettist; Act One had been written by Ranjit Hoskote and Act Two by Rani Day Burra. He wouldn’t divulge who, if anyone, was librettist for Act Three.

But he was heartened by the fact that just a few months ago, he had been to New York to attend a “world premiere performance” of the completed acts of the opera, organised by soprano Judith Kellock. He was all praise for the cast and chorus for having learned their parts and performed it so beautifully.

In a press statement about Agni Varsha to the American press, Bhatia had said: “The musical score is in a contemporary style, with lyrical sections based on ragas. It is an exuberant musical interpretation of a little-known myth from our great epic the Mahabharata, a new showcase for the music, dance and literature of India.”

To me, he elaborated further: “It has so much spectacle in it. It has all the nine rasas (emotions) in its storyline. There’s power, love, lust, sacrifice, faith, selfishness, jealousy, and vengeance…perfect for opera!” The synopsis includes demons emerging from the underworld, incest, suicide, patricide, on-stage beheadings, a ‘play within a play’, the works.

He was confident it would be staged “soon” at the world’s major opera houses. Quite unexpectedly, (and perhaps because I was writing for an international publication) he then entrusted me with the task of mailing the DVDs of the New York performances to the Metropolitan Opera, Covent Garden and La Scala. Did he have specific names in mind at those hallowed venues? “Oh, just look it up,” he said airily.

I kept my promise, but as I never heard back, I have no idea whether his opera was given due consideration.

Leafing through his substantial curriculum vitae (he gave me a copy to accompany the DVDs I would mail), I noted that he had written music for over 60 films (just a few among too many notable ones being ‘Ankur’, ‘Manthan’, ‘Junoon’, ‘36 Chowrighee Lane’, ‘Kalyug’) , close to fifty television serials (‘Khandaan’, ‘Tamas’, ‘Wagle ki Duniya’, ‘Lifeline’) and documentaries (‘Bharat Ek Khoj’), over 7000 jingles (Liril, Garden Vareli, Dulux; “I had to live”, he explained, almost apologetically to me), over thirty ‘serious’ works including music for solo piano, chamber music, music for larger ensembles and vocal music. His solitary opera stood out among the thicket of compositions.

I found this interesting, as throughout the interview Bhatia couldn’t over-emphasise how much he loved opera. He grew up listening to and studying Indian classical music, but his interest in western music was awakened by the Blue Danube waltz (Johann Strauss II). But the siren call came when he heard Tchaikovsky’s Piano Concerto no 1 at 13. “That decided it!” he said to me. From then on, his path was clear in his head.

He studied first at London’s Royal Academy of Music and then won a scholarship to study for five years (the only other Indian apart from Noor Inayat Khan, about whom I’ve written before) with the legendary

composition pedagogue Nadia Boulanger. His Paris years overlap with the time that the likes of Astor Piazzolla and the Spanish guitarist were also her students, so they are very likely to have known each other. It’s such a pity that Bhatia’s detailed biography wasn’t written in his lifetime.

He spoke to me excitedly of his love affair with opera, from his student years in the UK and Europe. “Opera always fascinated me”. Mussorgsky’s Boris Godunov at Covent Garden began a lifelong obsession with opera. “I’ve seen Richard Strauss’ ‘Der Rosenkavalier’ at least fifteen times!” he exclaimed. On a special trip to Vienna, he would go to two operas each day, at the Volksoper and the Staatsoper. As a student, he would avail of the cheaper standing places to the opera, even the Wagner behemoth Ring Cycle operas.

While Bhatia couldn’t say how the creative muse visited him, he told me his daily routine facilitated it. “Each morning, I open any random page from Bach 48 (Prelude and Fugues, Well-tempered Clavier BWV 846–893) and play that.” And of course, he acknowledged Boulanger’s “fabulous technique. She didn’t teach composition per se; she taught harmony and counterpoint.”

Throughout the interview, I nursed my drink as much as possible, as Bhatia kept wanting to refresh it. Nevertheless, I was quite light-headed at the end of it, clutching as well an autographed copy of his Sinfonia Concertante for Strings (2001). He bade me goodbye as if we were long-lost friends and asked me to visit again. That I didn’t get around to it is my loss.

Internationally acclaimed Goan-origin soprano Patricia Rozario has performed Bhatia’s music. Two decades ago, she came across his Kinguri-Vali for soprano, violin and piano (1960) and was “especially thrilled that he had set a Hindi poem to music.” She performed it in London and in Mumbai where he coached the ensemble. “He had a wicked sense of humour and told us quite gleefully that he had deliberately made it difficult because we were trained artists and should be able to deal with it!” More recently, she and her husband Mark Troop have performed his song cycle ‘Six Seasons’, specially commissioned for them.

I listened to the 2012 performance of ‘Agni Varsha’ again in the wake of Bhatia’s death and am glad I did. It was not a staged performance, and sung to piano accompaniment rather than to a full orchestra, but the lyrical sections were quite moving, particularly the love duet between Nitila and Aravasu.

I learned from a subsequent interview in 2017 on Scroll.in that Act Three was “almost finished.” I do hope he did complete writing his magnum opus before his death. Judging from just the first two Acts, it deserves to be staged, and if that happened, I am as confident now as he was then, that it will stand the test of time as an Indian operatic masterpiece.