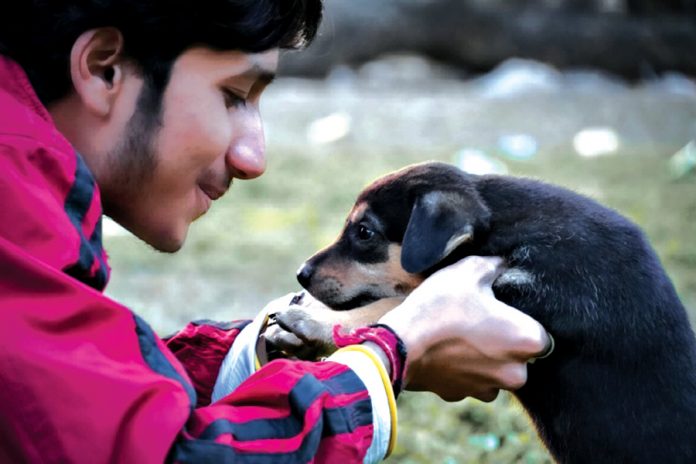 Some months ago, Anoushka, Abhishek, Sarthak, Garvita and Rishabh wrote to me from Thapar Institute and Technology, Patiala college in Patiala, requesting guidance with an animal welfare group they had started on the campus called Puppers Helpers Tiet.

This gave me a new idea – of starting animal welfare groups in every college campus. So, we put yet another Anushka, who came to me as a legal intern, in charge of this. She already has 30 college units, and my target is 50,000.

In the meantime, Enactus, which is a student organisation of social work that exists in most colleges in Delhi, have, on their own, started making animal welfare groups in every college in Delhi. The group is called Desi, and it is handled by Lakshita, the President of Enactus Motilal Nehru College. They are doing an excellent job treating animals, having them adopted, starting campaigns.

Thousands of students across India have been feeding and looking after animals during COVID. Many opted to stay back in their hostels to see that the resident animals were fed. When the staff of Jindal University wanted to throw out animals, over 600 students called, wrote in, and went there to protest till the university authorities backed down.

The worst case has been IIT Madras: a place ruled by two extreme leftists, who spend much of their time abusing the government and being vicious to animals. Inspite of government orders, and dozens of campus staff and students protesting, they made a ghetto for dogs where they were kept chained till most died. They did this in the name of wanting to save the deer on the campus. They then fed the deer dog biscuits and plastic till a number of those died. They finally had to back down under court orders, but not before they had wreaked misery on man and animal.

They could have learned a lesson from KG Reddy College of Engineering and Technology in Moinabad, which puts ‘world’s first animal friendly educational campus’ as part of its advertising! The campus doubles as a shelter for abandoned and abused animals. I quote from an article on them which made my day: “Most of the videos that captured the cruel treatment of animals, and shared widely this year on social media, had the same set of perpetrators – youngsters. Recognising the importance of making the youth compassionate towards animals, the management of an engineering college has decided to impart more than just technical subjects, by starting an animal shelter within its campus.” The KG Reddy College of Engineering and Technology in Moinabad has let dogs, cats, pigeons, turkeys, ducks and rabbits take refuge on the college premises. “The thought was that the students can bring in a change in the society, and be the ambassadors in spreading the message to their family and friends about loving animals and being sensitive towards them,” says chairman of the institute, K Krishna Reddy. “Based on the motto of ‘feel good and do good’, we want all our students to be involved in the activity of engaging with animals brought to the shelters.”

The well-being of the animals is the responsibility of the students. According to Mohd Zabi Khan, a student of the college, the students take turns to feed and treat the animals. “Once the animals are healthy, they are put up for adoption and handed over to a suitable owner. Some dogs have behavioural issues, so they are kept at the shelter for longer duration for rehabilitation”

Students of KJ Somaiya Institute of Management Studies and Research in Mumbai, St Xaviers’ College in Ahmedabad, and Symbiosis Institute of Media and Communication in Pune, also have animals on the campus and students and college administrations work out feeding and vaccination schedules, scheduling visits to the vet, even laying down rules about go and no-go areas — pets are allowed into hostel buildings and canteens. In Symbiosis, they are allowed into classrooms as well.

Institute director Vidya Yeravdekar says. “Students dealing with emotional insecurities, relationship problems and stress, benefit from pet therapy. We want to focus on the emotional well-being of our students too and hence this initiative.”

Students in Somaiya use a WhatsApp group to sync feeding routines, veterinary visits etc, and work with a local NGO to care for their campus pets. The group calls itself Animal Welfare Association of Somaiya (AWAS).

There can be no days off or annual breaks —someone has to make sure the routine stays intact at all times. In fact, vacation time has proved to be so difficult that students have decided to stay back in rotation to care for campus animals.

Students of Indian Institute of Management, Indore’s 193-acre campus, have turned their campus into a dog-friendly vicinity and take care of all campus dogs by joining hands with the NGO—Helping Hands For Animals (HHFA). The campus has approximately 50 dogs and the students of IIM Indore feed them daily, take care of their health and ensure their safety, marking the dogs with luminescent collars so that they are visible from a distance at night. The group also plans to train a few dogs for security and safety of the institute at the main gates.

The National Service Scheme volunteers of Kochi›s St Albert›s College will now get to learn the basics of animal welfare. The college has recently signed an MoU with the Humane Society International to conduct webinars and campaigns on animal protection. St Alberts› is the first NSS unit in the state to tie up with an animal welfare organisation.

During the pandemic an animal welfare club was formed, to take care of animals on the campus, by The Indian Institute of Engineering Science and Technology (IIEST), following an appeal from the students’ senate. A group of students, under the banner ‘People for Animal Welfare, IIEST’, has been raising funds since April to feed the strays on the campus that has been closed since the third week of last March with the onset of the lockdown. The institute made the club a statutory body to enable the administration to help the 200-odd dogs and 30-odd cats.

IIT Delhi has recently invited candidates for the position of a dog-handler in the institute. The position, worth `45,000 per month, is for a Bachelor of Veterinary Science to care for the community dogs on the campus. During the pandemic, when students left, IIT Delhi used their guards to feed the animals left behind.

The Jawaharlal University campus in Delhi has over 20 feeding spots, where dogs, nilgais and peacocks are fed by students. It has an animal cell and an animal ethics committee.

Why is it important to have animal welfare groups institutionalised on campus? Research shows that those who commit crimes against animals have a higher disposition to commit crimes against human beings. Research has consistently reported childhood cruelty to animals as the first warning sign of later delinquency, violence, and criminal behaviour. Nearly all violent crime perpetrators have a history of animal cruelty in their profiles. We must change attitudes early.

For students the advantage, that all research has shown, is that having dogs and cats around can help lower high blood pressure, and this calming effect is especially important as students juggle lectures, assignments and internships, prepare for exams, and feel homesick.

Puppers Helpers now has 60 volunteers. It is an official club headed by a teacher. It has made a temporary shelter for campus animals and held first aid classes, and is currently engaged in spreading awareness of how to treat parvo virus.