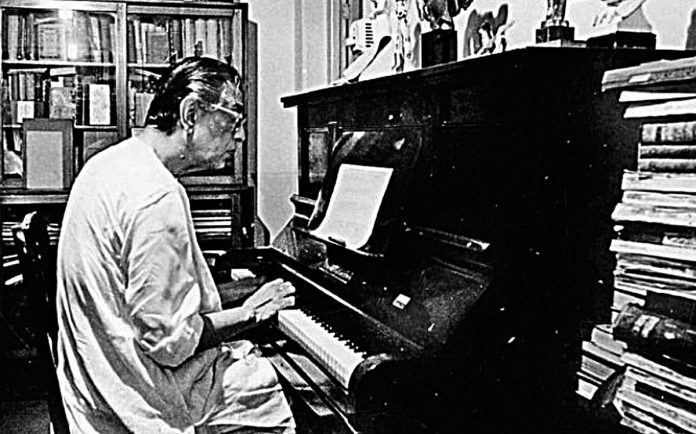 Despite the worsening coronavirus pandemic in India, the media circus over the Bengal elections has been so all-consuming that one hopes the birth centenary of Satyajit Ray (May 2, 1921 – April 23, 1992), one of its great sons of the soil doesn’t get forgotten this Sunday.

The 51st edition of IFFI commemorated this milestone by screening several of his classic works.

Satyajit Ray is a towering figure not only in Bengali but world cinema. What might not be as well-known to all but the film buff is what a consummate filmmaker he was, immersing himself in all aspects of the creation of his films, including costume design and even writing and directing and recording his own film scores.

“Like his films, the music of Satyajit Ray is a unique multi-layered blending of Western sense and Indian sensibility”, says the narrator of a 1984 NFDC (National Film Development Corporation) documentary, ‘Music of Satyajit Ray’.

“I was born into a musical family”, he said in the documentary. His paternal grandfather Upendrakishor Ray, apart from being a writer, illustrator, philosopher, publisher and amateur astronomer, was also a violinist and composer who in addition played Indian flute and drum. His maternal grandfather Kalinarayan Gupto was also a composer, and as he put it, everyone was a “natural singer” on his mother’s side of the family. He was nurtured in an atmosphere of Robindro and Brahmo Sangeet.

Significantly, Ray was also exposed to western classical music from a very early age. In an interview with Karuna Shankar Ray for Kolkata magazine (1970), Ray revealed: “In our house there was a record of the 20s, one movement of Beethoven’s violin concerto. Its ownership hasn’t yet been traced but I have been listening to it since I was seven. After reading about the great composers in the Book of Knowledge, especially about Beethoven, I came to worship him as my hero. If anyone were to ask me now to do a biography of Beethoven, I would jump at it. Someday, perhaps, I might seriously make a suggestion to East or West Germany that I do a movie on his life. My interest dates back to those days, and in my first year (at college) it was a consuming interest.”

The interest grew when a school-friend’s record collection widened his horizons. He read up on composers, their works and musical forms in libraries as he couldn’t afford to buy books.

In an 1982 interview (Sight and Sound), he spoke of his debt to Mozart: “… when I talk of Mozart as an influence, I am thinking more of his operas and his miraculous ability to have groups of characters maintain their individuality through elaborate ensembles. Leporello’s stuttering fright, the Don’s bravado in the face of doom and the Commendatore’s relentless intoning of his challenge in the Statue Scene in Don Giovanni is but one example out of many. I am greatly fascinated by the possibility of such ensembles in films. The memory game in Days and Nights in the Forest attempts this. Here the game itself is the ground bass over which the six characters play out their individual roles in word, look, and gesture.”

Even when speaking of film, Ray often used musical metaphors. When talking of Soviet film directors, he compared Sergei Eisentein (1898-1948) to Bach, while he felt Vsevolod Pudovkin (1893-1953) was “closer to Beethoven.” He likened the “pared-down” style of Swedish filmmaker Ingmar Bergman (1918-2007) to a “chamber music austerity.”

In his 1955 classic ‘Pather Panchali’ (Song of the Little Road), Ray made Indian film history not only by using a Hindustani classical musician of the stature of sitar maestro Ustad Ravi Shankar, but also for employing the genre cinematically. Such collaborations with other stalwarts such as Ustad Vilayat Khan (sitar) and Ali Akbar Khan (sarod) created a new idiom of film music in India.

As such maestros were “often busy internationally”, sometime in the 1960s, Ray decided to take up composition himself. He was too much of a gentleman to say that both Shankar and Khan had differences of opinion with Ray on fitting the music to the film, which gave him the impetus to compose his own music. In the documentary he acknowledged having initial difficulties, but “achieved some proficiency” over time, he added modestly.

As many film composers do, Ray composed at the piano, using western notation. When he realised that his musicians weren’t familiar with western scores and used Indian, more specifically, ‘Bengali’ notation, he was unfazed. He learned to transcribe his music from one notation to the other, quite
a feat.

Ray understood the power of silence and of natural sounds in augmenting the potency of a background score in his films. The musical accompaniment quite often can be very sparse, but this only serves to highlight it. Less is more. “I use music as discreetly as possible,” he stated.

He reiterated this point in his collection of essays titled ‘Bishoy Chalachchitra’ (published in translation in 2006 as ‘Speaking of Films’), where he devoted a whole essay to ‘Background Music in Films’. “If background music is used without reason, it can only harm the film.”

“Ideally, the director should be aware where music would be needed in the film,” said Ray in the documentary, “assuming the director knows about music.”

His observations are often extraordinarily perceptive: In ‘Speaking of Films’, he writes: “It is risky to use the sarod as there is every chance that the twang of its strings will clash with the hard consonants used in the dialogue, thereby distorting
the music.”

‘Charulata’ (1964) was Ray’s most satisfying experience as a music director, with musical links in its very structure. Ray believed that all film directors and composers should avoid “hackneyed formulas”, “worn-out conventions” of mindlessly using a certain kind of music to denote happiness, another for sadness or suspense and so on.

Inevitable comparisons have been made with Rabindranath Tagore and Ravi Shankar in Ray’s ability to combine Western and Indian influences to create his own trademark form, a path-setter for others to follow in his footsteps. No other film director has quite matched the command of music and score-writing that Ray had.

Apart from a few films such as ‘Shakespeare Wallah’, a 1965 Merchant Ivory Production, he chose to write background scores for his own films, for his own “personal pleasure” as he described it.

The celebrated French film composer and conductor Maurice Jarre (1924-2009) spoke admiringly of Ray’s music, terming it “haunting and soul stirring at the same time”. I think the commentator Anita Mukherjee in the NFDC film sums up Ray’s music even more succinctly: “imaginative, not melodramatic; balanced, not exuberant; functional, not decorative.” The same adjectives would have fitted just as well to his cinematography, further demonstrating how intertwined the aural and visual world were in the brilliant mind of
Satyajit Ray.