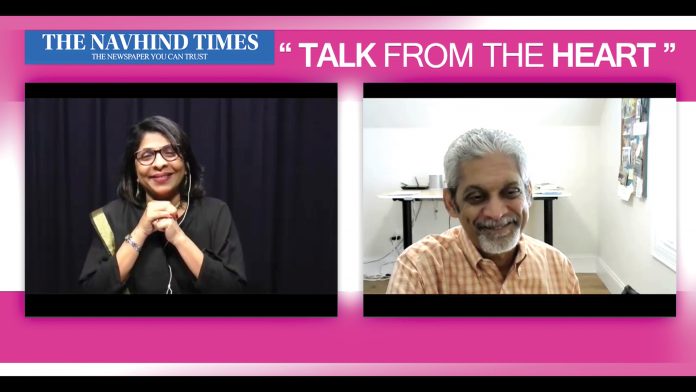 It was a proud moment for The Navhind Times on Sunday, April 25, as it celebrated its 100th event with a special episode of ‘Talk from the Heart’ with renowned psychiatrist and co-founder of Sangath, the mental health research NGO based in Goa, Vikram Patel. The hour-long show aired on Goa365 TV channel and Patel spoke at length on mental health and its various aspects – importance, causes, treatment, role of government and society and other relevant topics.

Mental health has never been more important than it is in the present moment. However, there is a great deal of stigma attached to mental illnesses and a person suffering from a mental condition. Discrimination and being judged are often the reasons why those who have mental illnesses, suffer in silence and sometimes with fatal results. “The history of mental health care in India as in many parts of the world has been very grim. Most of the psychiatric beds in India are in mental hospitals which were built during the colonial period. These were closed institutions and the patients were most probably treated no worse than animals. The only treatment these patients received would be very heavy doses of medication with a fair amount of violence. With this kind of care associated with mental illness, you can imagine the shame and fear attached to it,” stated Patel.

During conversations about mental health most often there is a conflation with severe mental disorders and the way the mental health care system actually addresses the needs of people with these disorders.  Defining mental health Patel said: “Mental health is everything that matters to us, it is our greatest personal asset. It is actually all the things captured in the all-inclusive definition given by WHO.”

However, assessing a mental health problem is not easy. “Mental health is a dimension and each one of us is on a spectrum from extreme wellness to severe ill health, wherein we are unable to function in an effective manner. There is no clear line to distinguish the two in psychiatry,” said Patel, and further explained the three criteria that are used to decide if a condition constitutes a mental
illness.

With 500 to 550 million people the world over suffering from one form or the other of mental illness, the numbers are staggering. The unique interaction between genetic vulnerabilities, early life experiences and what is going on in an individual’s life in the present, is the reason behind the person’s mental ill-health, said Patel. “Any one or more of these factors can explain the emergence of mental health problems in adulthood. There is no single answer to explain the rising numbers,” he
added.

Though the numbers are astounding, the response to and the treatment of persons with the condition is far from encouraging. This general laxity is due to the belief that disorders of emotions, thinking and behaviour are not legitimate and instead reflect individual weakness and/or poor life choices. “In my opinion, one of the fundamental reasons for this is that people do not want to be associated with someone who is mad or ‘peeshe’, a negative image they have developed of a person with a mental illness. And this can be attributed to the history of mental health care in India, that is dominated by a very incarcerating approach of carting people away under judicial orders by the police, often in a straitjacket to a mental hospital,” he said.

With India the leading country in suicide rates, the majority of suicides are among youngsters. Explaining one of the reasons, he said: “From puberty to early twenties, there are more dramatic transitions than any other period in one’s life, these include hormonal, sexual, social, etc. The brain too goes through very unique neuro-developmental changes during this period. These forces coincide and create a heightened risk for the development of mental health problems.”

Depression being one of the most common mental health issues, Patel gave various tips on how to keep negative thoughts at bay. “The first thing that one has to acknowledge is that you have no control over your thoughts and that your thoughts have a life of their own. Self-awareness about change in one’s mental health is crucial,” he emphasised. Seeking help by speaking to someone or doing something active daily like exercise, taking your dog for a walk, cooking, etc, he stressed is very helpful. “Finally, when none of these help, see a therapist, counsellor or a psychiatrist. No matter where you are in the world, you can reach out and get help.” Patel also spoke about the idea of getting lay people involved in taking care of patients with depression and anxiety disorders.

Making mental health for all a reality, he concluded, was a responsibility not just of the policy makers and medical fraternity but involved and included us as well!