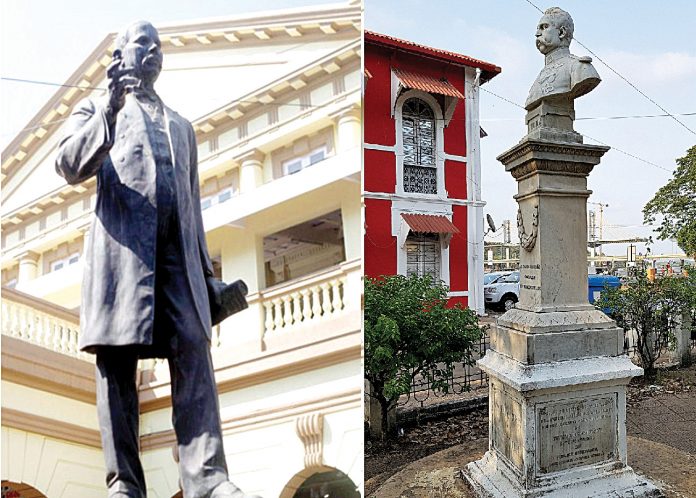 I only heard about him around a decade ago. Prior to that, I probably passed by his statue near Mumbai’s Metro cinema without realising it.

I’ve just finished reading ‘Room 000: Narrative of the Bombay Plague’ by Kalpish Ratna. Ishrat Syed and Kalpana Swaminathan, both surgeons, writing together as ‘Kalpish Ratna’ explore the interface between science and the humanities. ‘Room 000’ is a fascinating read, especially for one with a medical background, but I’d recommend it to everyone. Had a book like this been around in my medical student years, I’d have had a better sense of perspective and awe when visiting Grant Medical College (where Room 000, the site of groundbreaking discovery on the plague, was located) and so many other city landmarks. It brings to life Alexander Yersin (1863-1943, who lives on through the name of the plague bacillus, Yersinia pestis), Robert Koch (1843-1910, one of the founders of modern bacteriology), Waldemar Mordecai Haffkine (1860-1930, who developed vaccines against cholera and bubonic plague), Paul-Louis Simond (1858-1947 who demonstrated that the intermediates in the transmission of bubonic plague from rats to humans were the fleas Xenopsylla cheopis that dwell on infected rats) and so many other pioneers who all were in India around the time of the Bombay Plague epidemic in the late 1890s spilling into the twentieth century. It was thrilling to travel back in time into their world, and a refresher course on basic principles of bacteriology, from Koch’s postulates to the intricacies of Gram staining.

Acacio Viegas features very prominently in the book (I counted at least 168 mentions), and deservedly so. To him goes the credit for spotting the index case and correctly diagnosing the outbreak as bubonic plague, much to the skepticism and scorn of some of his peers. He then launched a campaign to clean up slums and exterminate rats, the carriers of the plague.

His diagnosis prompted the British government to bring in four teams of independent experts to ‘confirm his findings’ (Kalpish Ratna speculates that there might have been subtle racism, in mistrusting the acumen of a native), most famously Haffkine, whose Institute still stands in Parel. Viegas’ early diagnosis saved untold thousands of lives. He personally inoculated around 18,000 residents with Haffkine’s serum.

Kalpish Ratna portray him as a “grave physician”, who after hours was a “dreamy-eyed romantic, inclined to music, a classicist who read Camões-but not Bocage”, a “sharp dresser with a luxuriant crop of curls he tried in vain to tamp with pomade.” It is an imaginative description, given the little that is indeed known of his personal life.

There are so many parallels between the lives of Acacio Viegas and my own great-grandfather General Miguel Caetano Dias (1854-1936). They both are Goan doctors of course, but their timelines overlap neatly, born two years apart and their deaths three years from each other. Both were at the forefront of the campaign against plague in their respective cities, at different times (1896 onwards in the case of Viegas in Bombay; the first decade or so of the 20th century in Goa for Dias) and from slightly different vantage points. While Viegas was in private practice, Dias was at the helm of both the Escola Médica and Serviços de Saúde (Health Services). Both, from all available accounts didn’t discriminate between rich or poor.

Both saw the connection between public health and civic administration: Viegas became President (the first native Christian to do so) of the Bombay Municipal Corporation in 1906; Dias was President of the first Provincial Congress of Goa and also mayor of the Municipal Council of Ilhas.

Both had statues erected in their memory for their services to humanity in combating the same disease even during colonial regimes, British and Portuguese. Dias had this honour in his lifetime; with Viegas it was three years posthumously, 1936, coincidentally the year of Dias’ death.

As I am from the family of Miguel Caetano Dias, I am privy to much about even his early years, passed down as oral history through generations. I was unable to find any information on Viegas’ years growing up in Arpora. His family must have a similar oral history, perhaps even photographs. Currently, there is just one photograph from his later years in the public domain, and of course pictures of the statue.

Kalpish Ratna bestows a wife Paloma and two unnamed children on him, and a genealogy website says his wife was Amelia, but I couldn’t find any further information on his Arpora years or about his family. Would anyone know where his family house was in Arpora, and if it still stands?

I also couldn’t help wondering: what prompted Viegas’ parents to send him to St Xavier’s High School, Bombay after his primary education (primeiro grau) in Goa? Having completed his matriculation with distinction in 1874, he enrolled in Grant Medical College, getting a First Class at the Licentiate in Medicine and Surgery degree examination in 1880, later setting up private practice in Mandvi in South Bombay. From there he made history.

In contrast, my great-grandfather finished his school education in Portuguese Goa and then proceeded to study medicine in Lisbon. He went on to make history too. But Viegas and Dias occupied two different worlds, the Anglophone and the Lusophone.

The main reason the young Miguel Caetano chose Lisbon for his medical studies must have been the fact that his brother was already there. But was Bombay ever an alternative option? It definitely would have been cheaper, and much closer to home. The story of his descendants would have been quite different had he studied medicine in Bombay. Interestingly enough, he did marry a ‘Bombay’ girl, Veronica, sister of Austin da Silva, who founded Holy Family hospital in Bandra.

My great-grandmother Veronica da Silva Dias, although fluent in Portuguese, seems to have preferred English. This is clear from her letters to her eldest son, my grandfather Vítor Manuel Dias. She would begin in Portuguese, “Meu querido filho” (My dear son), but after a few lines lapse into English.

What the separate trajectories of Acacio Viegas and Miguel Caestano Dias do demonstrate is how profoundly the medium of instruction (in these two cases, English and Portuguese) can set one on completely different life paths.

That said, Viegas and Dias would certainly have known of each other, and perhaps even corresponded with or even met each other.

I’ve not explored primary sources on the plague in Goa, but the secondary sources I’ve read only touch upon the sanitary measures employed. It is eminently plausible that the plague came to Goa from Bombay. Did its treatment come from there too? Were plague vaccines (serum, specifically the Haffkine serum; Haffkine even worked for a while in Daman) imported from Bombay? Or did politics or financial considerations come in the way? I’d love to know more.