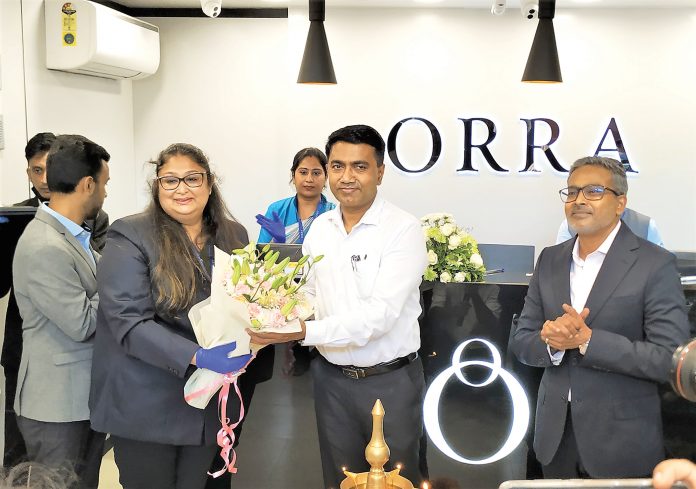 ORRA launched its three-level flagship store in Margao on Sunday at the hands of Chief Minister Pramod Sawant. The company, which specialises in diamonds and gold, also plans to introduce new stores in other parts of the state in the next two years. Speaking at the store launch, Chief Minister Sawant lauded the company for its efforts in reviving the economy of the state.

“I am very happy that despite the pandemic this showroom has been opened. I congratulate you on your service to the people as well as your efforts to help revive the state’s economy and also for showing confidence in Goa. A lockdown is not the solution, the state’s economy has to continue and despite the pandemic we have to survive and run the economy by following the norms,” he said.

Meanwhile, chief operating officer (COO) of ORRA Cecil de Santa Maria announced plans of opening more such stores in other parts of the state adding, “We are happy that we are launching our flagship store in Margao which is a three-level store and we have great expansion plans for Goa. We are looking forward to open another three stores in the next two years in Goa. Goa is a very important market for us. Had COVID not come, we were planning to open a store in Ponda. We will definitely soldier on and this year we will definitely open one if not two stores,” he said.

ORRA specialises in diamond jewellery specifically bridal jewellery with a wide range for the bride as well as for gifting on the wedding occasion. Its catalogue also comprises of a premium 73-faceted hand-crafted diamond called the Orra Crown Star and have a range of jewellery designed around it. Its most prestigious range is a one of a kind ‘Generations Trousseau Box’ which contains jewellery that can be handed down from one generation to another, a sort of a legacy for the next of kin. The ‘Astra’ range of jewellery is also offered with zero interest EMIs. Jewellery offered by ORRA ranges from Rs 15,000 up to Rs 15 lakh.

Govt may have to spend Rs 2,000 cr more to procure bags

Federal Bank, Mashreq Bank tie up for money transfer from UAE to India