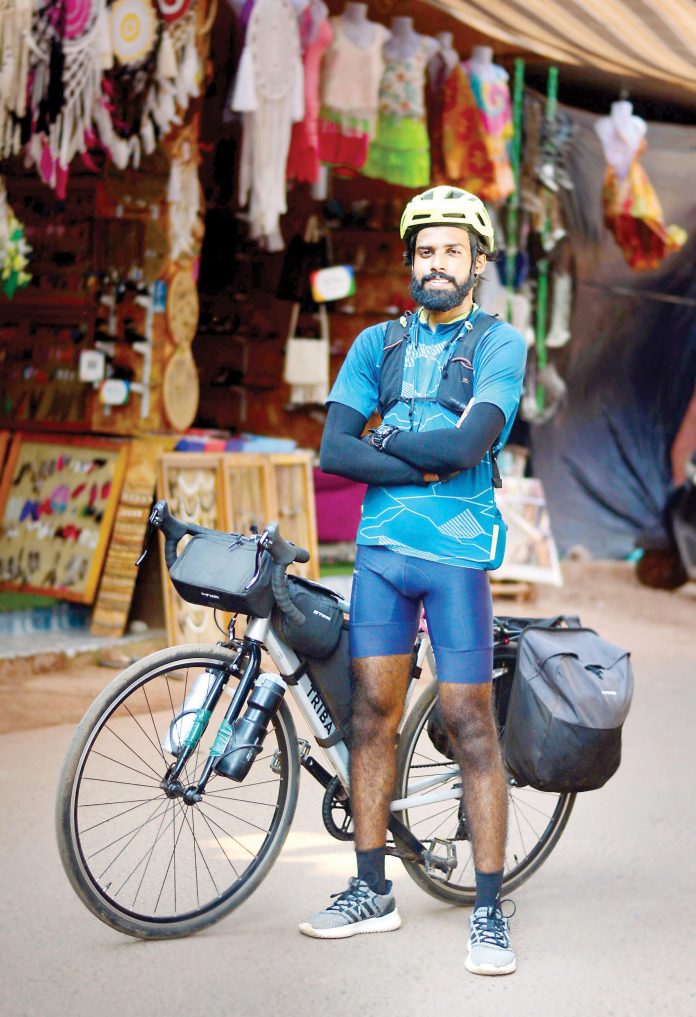 Navin Paul from Kerala has been cycling around India since March this year. NT BUZZ caught up with him during his stopover in Goa

Navin Paul has always enjoyed going on backpacking trips on his Royal Enfield classic, mostly exploring different parts of South India. But doing a pan-India trip was at the back of his mind for a while.

“I had this plan of doing an all-India trip a few years back but due to work and other commitments I couldn’t do it,” says the freelance photographer who hails from Kerala and works with different ad agencies.

And so, as 2021 dawned, Paul decided it was time to follow up on this biking plan. “I just had to make it happen. If I didn’t do it now, then it would never happen later,” he says.

But like a lot of people, 2020 had been difficult for him workwise. That coupled with high petrol prices, meant that Paul needed to resort to a more economical means of transport. And so, he bought a cycle in February this year. “The last time I had cycled was from home to school about ten years ago,” recalls Paul, who quickly got into training hard for the trip. Starting with short distances of 20 kilometres, he gradually increased to 30, 40, 50 and then 100 kilometres around Kerala.

Finally, confident, he took off on his trip on March 3 this year. “I informed my parents about this trip about ten days prior. Although they were used to me backpacking, they were worried when they learned that I was going to be doing his on a cycle and that too during the hot summer months. But since I began, I keep updating them daily on what I do, where I am and now, they are more relaxed,” he says.

Having started from his hometown Kottayam, Kerala, and following the coastal route, Paul then moved to Thrissur, Calicut, Kannur, Kasaragod, to Mangaluru, Udupi, Gokarna, before touching down in Goa. He will now bike to Mumbai before heading north to Gujarat, Rajasthan, Delhi, Punjab, Jammu, Kashmir, Leh, then down to Himachal Pradesh and Nepal. He will then be jumping to Sikkim and from there to the seven sister states in the North East before coming down to Kolkata, Visakhapatnam, Odisha, Chennai then Kanyakumari and then back home.

“In all I think the trip should take me more than a year. But I have a lot of time and I want to complete it,” he says, adding that he has been taking whatever precautions he can to protect himself against COVID, and he has been surprised that despite the pandemic scare, people have been very open to receiving him wherever he went.

Recalling one instance in particular, Paul states that while he was on his way from Guruvayur in Thrissur to Calicut, he had to pass through a very hilly terrain at Malappuram. Exhausted from cycling on the slopes, he decided to knock on doors on the way so that he could rest awhile. “I found a kid playing outside one house and asked him to call his parents. When the mother learned about my journey, she invited me in and prepared a bed for me,” he narrates. After a nap of three hours, the family also invited him for a lunch of ghee rice, chicken curry, etc, which left him pleasantly shocked. “I had not expected any of this, especially because we are in COVID times. I thought at the most I would be allowed to sleep in the veranda. But they told me to eat as I needed my energy to carry on the trip. In fact, later they also gave me Sulaimani tea and some local snacks and only then did they let me go,” he says.

In Murudeshwar, he had another memorable encounter. “I had nowhere to stay when I got here. My plan was to camp on the beach. But while I had been to the beach a few years ago, it hadn’t been as crowded as it was now,” says Paul, who then struck up a conversation with a man who was clicking pictures of tourists at the temple nearby, which is famous for its Shiva statue. The man warned him that camping near the beach was out of question as many robberies take place. He then invited Paul to stay over at his place. “This was a fisherman who during the lean period made money by clicking photographs of tourists. He was very down to earth and his mother made us a nice meal of fresh sea food. In the evening he then took me on the bike and introduced me to all his friends. He also told me to return there when I was done with my trip and promised to take me to sea,” says Paul.

And while there have been other instances where people have hosted him at their house or given him food, Paul otherwise ensures that he sticks to a daily budget of `200. This, he says, has been easy in Kerala and Karnataka where the food has been cheap. In Goa, though, he has had to go a bit over the budget. But that aside he has enjoyed his time in the small state. “This was my second time in Goa and in all I spent two weeks. I especially loved South Goa because the beaches are beautiful, green and peaceful and remind me a lot about Kerala,” he says.

Once he completes his all-India trip, Paul intends to hold a photography exhibition of his works. “It is every photographer’s dream to have a photo exhibition. But up until now my collection has always been very scattered. But once I am done with this trip, I will have a good body of work to showcase based on certain themes,” he says, adding that it is a work in progress. “The exhibition will mostly centre around nature conservation as that is the most essential thing. We need to preserve our earth otherwise it will be very bad for our future generations.”