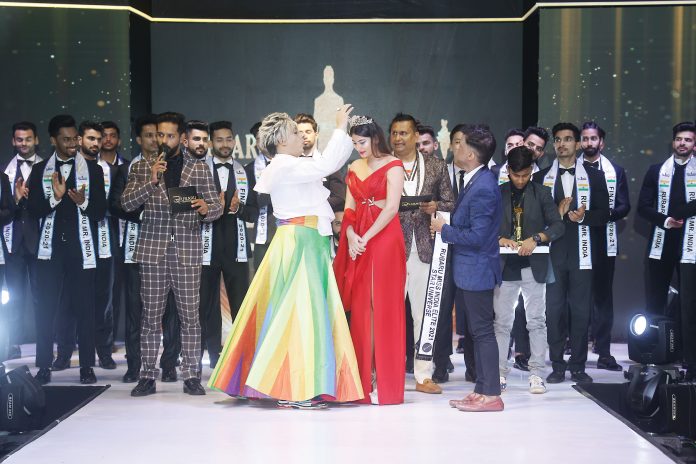 Nakita Fernandes is prepping to travel to Portugal later this year to represent India at RuBaRu Miss Star Universe 2021.
NT BUZZ catches up with this young and
talented beauty

In 2019, Nakita Fernandes represented India at the RuBaRu World Beauty Queen 2019 in South Korea and was crowned the 2nd Runner Up. That was the start of her glamourous journey.

Ever since then the bubbly lass from Saligao has been winning hearts on and off the stage. While modeling has been her priority, she has slowly been venturing into the world of singing with plans to get into acting too.

Her first music video was for the Punjabi tune ‘Katilana Banke’ by Appy Jazz ft Nakita Tania Fernandes. The song was produced by Nav Drishya production and was majorly shot in Goa during the partial lockdown. She was also featured in ‘Pehle Pyaar Ka Pehla Gham’ featuring Parth Samthaan-Khushali Kumar. Sung by Tulsi Kumar and Jubin Nautiyal, the song is a recreation of the popular track from the 1996 movie ‘Papa Kehte Hai’. “The song was shot in South Goa. I played a role of being the friend/ villain. It was a huge exposure for me as I was working with T-Series,” says Fernandes.

The beauty followed it up with a Bollywood Hindi love song called ‘Behene Lagaa’ by Anurag Mohn featuring Nakita T Fernandes, Dev Sharma, Sachin Soni, and Urvi Singh. This was shot In Goa under the banner of the Goa-based Soni’s Entertainment Production.

Looking back, the journey, she says, has been an interesting and an adventurous one so far. “Life has been so much better, work wise I started getting more offers and was constantly working along with completing my graduation in business administration,” she says. People around her also started taking her passion more seriously and now they even want to see her on big screen.

The crowning, she says, came like a surprise to her. “I mean who can say such an opportunity occurs twice. My agency RuBaRu have so many contestants each year who really aspire to represent their country and to see that they acknowledged me to do so, I felt extremely grateful,” says Fernandes, adding that she was presented with the title based on factors like experience, credibility, consistency, and determination. “I was under watch since I won the title in South Korea and was judged for the work I’ve been doing, how I’ve been carrying myself around, the photoshoots, and the media interaction,” she says.

And now that she bears the responsibility, she’s already begun taking classes from fitness to public speaking. Her dream remains representing India for now and bringing home the main title. “Though I’ve taken part in so many pageants, the hunger and passion for winning never ends,” she says, adding that she is also looking forward to working as a tourism ambassador in Goa through Goa Tourism. “I’m awaiting for the opportunity as it will not only help me utilise my knowledge at pageants but also to promote my state in the best manner,” she says.