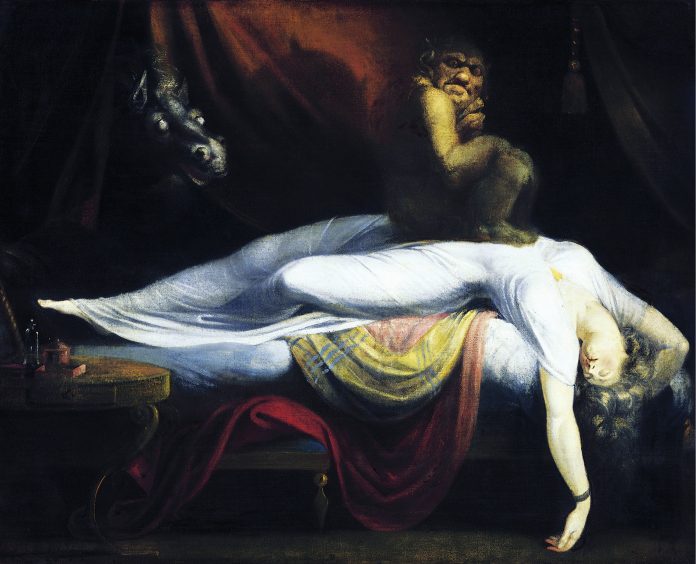 Sleep paralysis is a state, during waking up or falling asleep, in which a person is aware but unable to move or speak. This state is often coupled with hallucinations. NT BUZZ learns more about these bizarre ‘sleepisodes’ and what causes them

Two years ago, while she was pursuing her MBA degree, Anupama Dhanu returned home for the weekend. It was half-past midnight and she remembers chatting with a friend before dozing off. Suddenly, at about 2 a.m., she found herself awake. The room was pitch black and she couldn’t move a muscle.

“When I tried to scream, my mouth twisted with all the effort but I couldn’t shout. Neither could I move. I felt like I was pinned down by something. After a while, I was able to shake it off – whatever it was. The paralysis broke and I screamed for my mother,” she says, adding that her mother was able to coax her back to sleep, but at about 4 a.m. it happened again.

The 25-year-old, who has faced other sleep disorders such as sleepwalking as a child, describes this as the worst experience she has ever had. Her friends would later explain to her that it was a phenomenon known as sleep paralysis.

Consultant psychiatrist and life coach, Kalpa Govekar explains that sleep paralysis is a condition in which a person is unable to move, either at the onset of sleep or immediately upon awakening. When a person sleeps, she/he cycles through five stages. REM (Rapid Eye Movement) sleep is the last stage preceded by four non-REM sleep stages and is a period of deep sleep during which dreaming takes place. During REM sleep, one’s body enters a state of paralysis called atonia. Sleep paralysis occurs when the brain is active, but the body is in this state of atonia or paralysis.

Agnes Fatima Pinto from Vasco started experiencing sleep paralysis around two years ago. “One night I just couldn’t move. I felt as if someone was holding me. I tried moving in all directions but nothing happened. I was a little shaken up and I was afraid to tell anyone,” she says, adding that she only learned about the condition when she came across an article about it on Facebook.

Similarly, the first and only time Omkar Rai experienced it was when he was staying in a hostel during his third year of engineering. One night after a particularly tiring day he recalls having a late dinner at around 10:30 p.m. and falling asleep shortly after. “Around five minutes later I woke up and all I could see was complete darkness – intense darkness. I sleep on my stomach and I could feel a heavy weight on my back pushing me down. I tried moving my feet and hands but I couldn’t. I tried to open my mouth to say something, and I couldn’t do even that,” he says. For the Mapusa resident, it felt like 20 minutes before he could move again. A few days later, he mentioned the experience to some of his mentors in college. “Initially, I was scared. Was this something abnormal? I was nervous,” he says, adding that he was relieved when his mentors explained that it was a phenomenon known as sleep paralysis that is shared by roughly 10 per cent of the world’s population. “I realised I was not alone and that this happens to many people,” he says.

For most, episodes are mild. Like Alcina Fernandes who remembers experiencing episodes of sleep paralysis long before she learned about the phenomenon. The 23-year-old engineer would just chalk it up to a bad dream. “I would often experience it when I am about to get up. My alarm goes off and I’m awake but I am unable to move. I’d often think I am having a bad dream of not waking up and eventually fall asleep again. I would wake up about five to ten minutes later and everything would be fine. It was never a horrific experience, for me. Just a bad dream – and poof! It’s out of my head,” she says.

Harish Tamankar of Siolim also brushed it off as no more than a bad dream. “For me, it was like I could hear a discussion happening around me but I could not participate because I couldn’t move,” he says.

For different people, episodes of sleep paralysis may vary in intensity. Some may just experience complete immobility upon waking, before being able to “shake it off”. For others, episodes are coupled with hallucinations. For Natalie Monteiro from Pernem, it happened during her class 12 board examinations. “I was up studying late one night before I went to bed. Suddenly I woke up and, in the darkness, I realised that I was floating above my bed, frozen from head to toe. The walls of my room had disappeared. It was just me and my bed floating in what seemed like outer space. I could see the faint outline of planets around me. And then I began to hear the ringing of church bells and a loud, distorted and menacing voice talking to me. I tried to move, I tried to scream. But I couldn’t,” she says, adding that in her fright she began reciting a prayer in her head till she fell asleep. The next morning, she says, the experience was still so vivid. “I knew it wasn’t a dream. And for the longest time, I thought it was some kind of ungodly manifestation.”

Govekar explains that while sleep paralysis is usually a very benign condition and is mostly harmless, it can become a cause of major concern if there are distressing symptoms such as fear and anxiety, paranoia, hallucinations, and panic attacks associated
with it.

An estimated 10 per cent of people have more recurrent or bothersome episodes that make sleep paralysis especially distressing, adds Govekar. “As a result, they may develop negative thoughts about going to bed, thus reducing time allotted for sleep or provoking anxiety around bedtime that makes it harder to fall asleep. Sleep deprivation can lead to excessive sleepiness and numerous other consequences for a person’s overall health.”

Having good awareness about the condition helps a lot in reducing fear related to the condition and resetting a proper and restorative sleep cycle, says Govekar. She explains that the condition can be prevented by simply fixing problems with sleep. “This includes following a proper sleep routine and maintaining sleep hygiene, ie tips that ensure good and restorative sleep and maintaining a fixed sleep schedule.” Treating the associated sleep disorder if any (such as associated sleep apnoea or narcolepsy) may also be of help, she adds, as also treating associated psychiatric conditions like anxiety, PTSD, substance abuse, etc. Govekar further suggests relaxation techniques such as breathing exercises, yoga, meditation and mindfulness to treat sleep paralysis. “If none of these techniques work then the person may have to be evaluated in detail using sleep studies like polysomnography. Sometimes even medications are used in rare cases. People also benefit from Cognitive Behavioral Therapy (CBT) for sleep paralysis,”
she says.