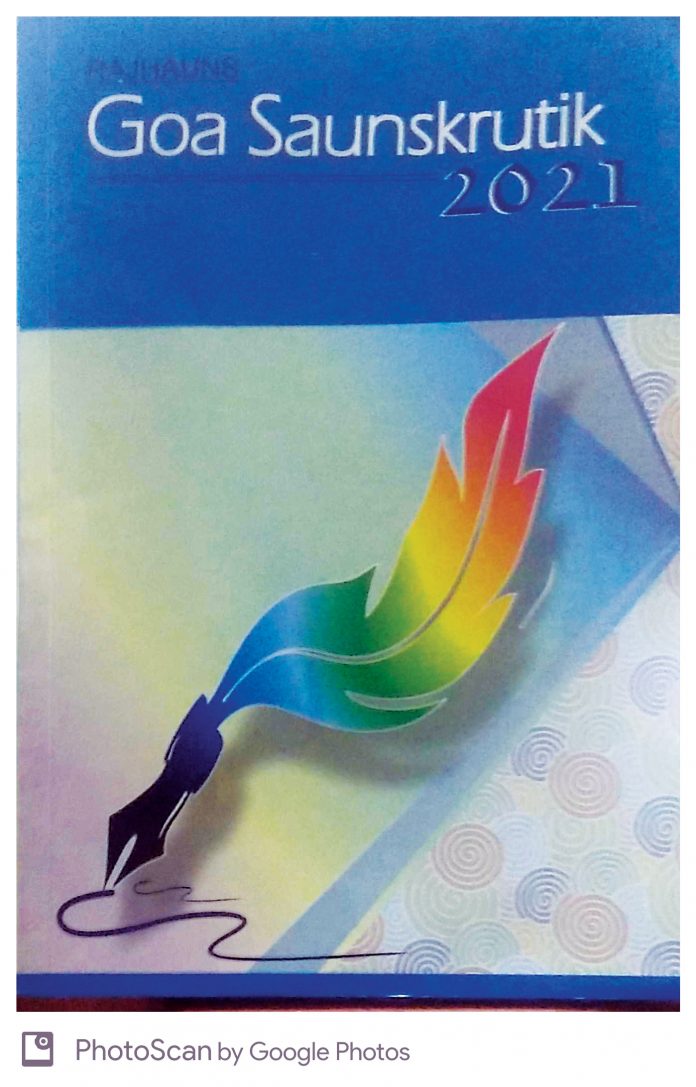 It’s 272-pages thick, costs a hundred rupees and contains quite a bit of information and lists about various aspects of Goa. It’s a cultural guide to the State and calls itself Goa Saunskrutik. The 2021 edition of this guide has come out just recently.

If you’re in anyway interested in knowing more about who are the writers, authors, organisations and publishers active here, this could be a useful place to start your search. It helps you to find your way around the place, get information to understand the lay of the (written) land, and to get to know the who’s who of some culture-related fields in Goa.

Its pages focus on writers, books, languages, libraries, directories, post offices in Goa, art galleries, cultural institutions and the like. There is also a sprinkling of politics in the book – by way of listings of Goa’s members of Parliaments since 1962, current legislators, and the like. But the main focus is cultural, or rather, the literary aspects of Goa today.

But more on the point, the book focuses on the written side of Goa. It covers the names of prominent Goan writers, and the pen names they were sometimes known by. The guide also lists some 15 periodicals and newspapers published in Goa (nine in Marathi, four in English, one in Konkani). There are incidentally also eight weeklies (including the Official Gazette), five fortnightlies (not all regular) and at least 23 monthlies. Besides other publications, there are some seven annuals (six in Konkani and one in Marathi).

It’s interesting to see the history of literary conferences held in the region over the years. For instance, the Gomantak Marathi Sahitya Sammelan (literary conference) was held in 1935 in Margao, and then on in Bombay State or Maharashtra, till it returned to Goa in December 1962. It has been held in various parts of Goa ever since.

Likewise, the Akhil Bharatiya Konkani Parishad began in 1939 in Karwar, was held in 1940 at Udupi, then in Mumbai mostly, till shifting back to Margao in May 1962. It has been held in various pockets of Konkani-speaking south and coastal western India.

Sections of this book deal with the history of the Konkani language – everyone seems to tell the tale from their own diverse perspectives though. There’s information on Konkani and the Sahitya Akademi, the Opinion Poll, and an update of happenings on the literary front.

From the list of ‘honours, awards and rewards’, what stands out is the limited number of recognition for works in the English language. Another section looks at ‘Konkani as the Official Language’.

For authors and publishers, there are sections that might be of interest – about ISBNs (the crucial book numbers that somehow add legitimacy to a published book), the Publication of Books Act, and some official schemes in Goa for the ‘promotion of literature’.

Five pages are dedicated to updates on ‘book events’ that took place in our pandemic year, 2020. Another four and a half pages offer a list of translators offering their services in Goa – in Konkani, English, Hindi, Marathi, and, to a lesser extent, in Portuguese, Kannada, Tamil and Malayalam.

Other lists look at DTP (desk-top publishing) operations, and directories that give you information on Goa, both in print and online. There is also a list of seven ‘wholesale library suppliers’ in case that
is your interest.

Detailed lists of cultural committees are useful. Among these one can find membership details of the Goa Marathi Academy, the Institute Menezes Braganza, the Goa Konkani Akademi, the Kala Academy, the Tiatr Academy of Goa, the Goa Hindi Academy, the Dalgado Konkani Akademi, the Directorate of Official Language, the Thomas Stevens Konknni Kendr, Vishwa Konkani Kendra, the Konkani Marathi Parishad, the Sahitya Sevak Mandal, the Konkani Bhasha Mandal, the Mumbai-based Goa Hindu Association, and other cultural organisations.

Contacts to litterateurs make for a longer list. This spans pages 102-211, and comprises the meat of the book, in a way. Names of those writers who are not available are listed as well – seeking help of the reader to track them down. Writers who passed away recently are also paid tribute to. Other information available focuses on publishers, postal codes and facilities, speed posts tariffs, etc.

Pages 19-20 contain an interesting list of statues that one encounters across Goa. Would you have guessed that there are as many as 85 different statutes scattered across the region from Anjuna (Dr Manuel Albuquerque) to Vasco da Gama (Bandodkar)? Going by the list of statues, one could end up thinking that Shivaji was the most popular figure of Goa. Or is it just that the region which Shivaji ruled itself has a longer tradition of commemorating its heroes through statues and stone?

Goa, incidentally, also has some 43 art galleries, as the lists here show. One might ask whether all are used to optimum capacity though.

Interestingly, there are barely 37 roads listed which have been named after Goan achievers. Cardinal Gracias has a road commemorating his memory in tiny Dramapur; Alfred Rose’s in is village of Aldona; and Dr Pundalik Gaitonde in the beach-village (and his ancestral land) of Palolem-Canacona.

This book is published by Rajhauns, the Panjim-based publishers. Besides this, it also comes out with a yearbook, currently 660 pages in size and costing `350. By contrast, the Goa Saunkrutik 2021 (Goa Cultural 2021) covers 272 pages and is priced at `100.

One complaint could be the liberal use of Marathi (or Sanskrit-influenced, hard to comprehend) terms in a book in English, without any accompanying explanations. For instance, what is the reader of an English text to understand by Samanvayak, Sahayyak, or Pratibhavan? What is also confusing at times is the usage of Konkani pronunciations and spellings for village names (for example, Anjunem and Haldonnem for the more commonly-used-in-English Anjuna and Aldona). Despite this, it is a useful book,
worth its price.