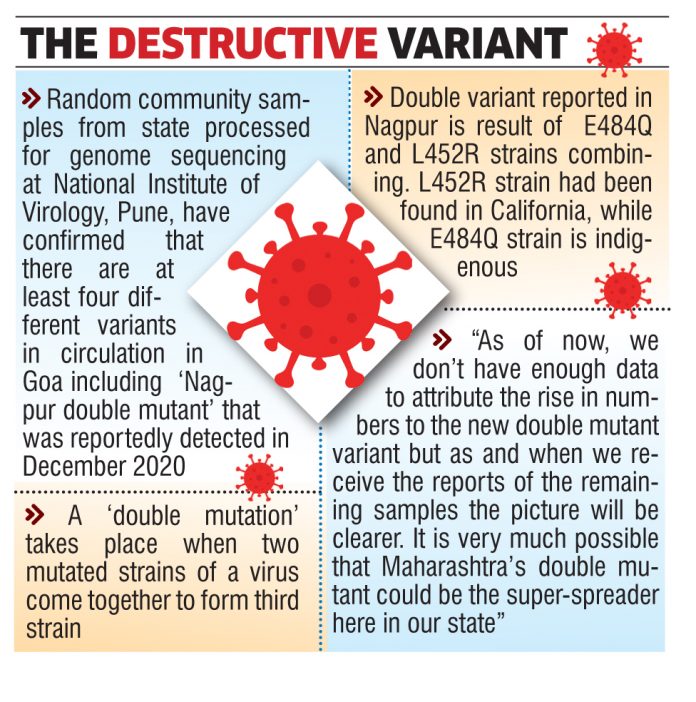 Random community samples from the state processed for genome sequencing at the National Institute of Virology, Pune, have confirmed that there are at least four different variants in circulation in Goa including the ‘Nagpur double mutant’ that  was reportedly detected in December 2020.

The reports received on Friday evening revealed that the other three strains are: those originated in the US and  the UK, and the one which has been present in India since the outbreak of the pandemic.

According to the expert of the department, a ‘double mutation’ takes place when two mutated strains of a virus come together to form a third strain.

The double mutant variant reported in Nagpur is the result of the E484Q and L452R strains combining, the officer said,  adding that the L452R strain had been found in California in the United States, while  the E484Q strain is indigenous.

A total of 15 samples had been drawn and sent to the NIV for genomic analysis early March; of which only reports of four samples have been received and reports of the remaining samples are still pending, he disclosed.

“We had got reports of four samples that revealed that four different strains are in circulation. As of now, we don’t have enough data to attribute the rise in numbers to the new double mutant variant but as and when we receive the reports of the remaining samples the picture will be clearer. It is very much possible that Maharashtra’s double mutant strain could be the super-spreader here in our state,” the senior health expert explained.

He said the health authorities in Goa are more concerned about the double mutant variant as it has created havoc in Maharashtra, which has seen sudden and massive rise
in infectivity.

“The UK strain has been in circulation in India for quite some time;  there were also a few cases in Goa which were timely controlled. So irrespective of the strains, the precautions and measures are equal for any mutant strains,” the expert said.

When asked if the Covishield vaccine can be effective against these four new variants detected in Goa, the expert  said, “The government of India has said the particular vaccine is effective against different mutants. So we have to accept that claim as we have not done any independent research on our own. Hence we are conveying the same to public and continuing with the mass vaccination drive.”

He said that at least the vaccine will act as one strong layer against the virus, adding that the severity of illness and transmissivity will
be less.

Adopting the COVID-19 appropriate behaviour is a must for every individual irrespective whether one is vaccinated against the virus or not, the expert reckoned.

ICU facility in the offing at N Goa district hospital