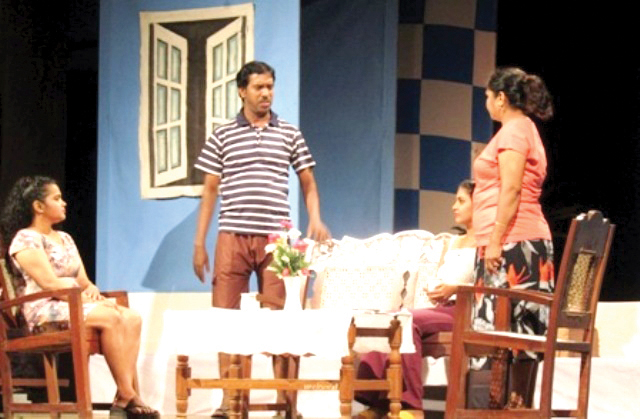 ‘Oxem Kiteak’, a tiatr written and directed by Fr Doel Dias was presented by the Menino Jesus Kala Association, Chinchinim at the Kala Academy Tiatr Competition. The story takes a critical look at the illegal organ trade in the medical profession and compares it to the various destructive happenings taking place in Goa under the guise of development.

Wilton and his sister Melita are engaged in a business that is making quite a lot of money. Wilton’s wife Ivy is diagnosed with a kidney ailment that she treats with medicines from Motes, a herbal doctor who has managed to cure many people. Motes lives with his wife Rosy. Their little daughter Evril and Ivy’s little son Daniel are good friends although at times Wilton is not in favour of the friendship with that family. Tanya, a friend of Ivy’s, returns from London complaining of kidney failure. Wilton recommends a top doctor in Mumbai. As the play progresses, many evils that are plaguing our lives today reveal themselves.

Doel Dias has written the script and directed the show. Frazer Dias provides some good sets and Joao Marques scores in the area lighting. The actors do well with Ivy Pereira heading the cast as Ivy and supported well by Ninotchka Fernandes as Tanya. The ladies brigade is out to get the villains. Vilton Coutinho plays the husband and Abigail Cardozo plays the sister. Mathew de Souza as Motes, the ‘doctor’ joins Sebastiana Fernandes, who plays Rosy his wife, to provide many humorous moments.  Evril Albuquerque and plucky Daniel Gomes play the two precocious kids while Lenny and Doel Dias play minor roles.

The background music is by Valencia and Richel. The band comprising Canon, Samy, James, Roland, and Xavier, is led by Senon, all of whom join well to provide music with a punch, especially the exclusive drumming. The opening song is a choral by Jeffry, Salil, Benjamin, Blaise, Suzeta, Deepti, Steedra, and Nicia who also return for another impressive choral on the teachings of Jesus Christ. There are other songs by Clarissa, Josiah, Yulene, Johan, Onasis, Mathew, Divina, Magris, Magnel, Yelston, Joann, Michael, Elaine, and Carmel. The duo by Fr Bolmax and Jeffrey has plenty to tell on protecting our rivers and environment. Check it out!

We are the world