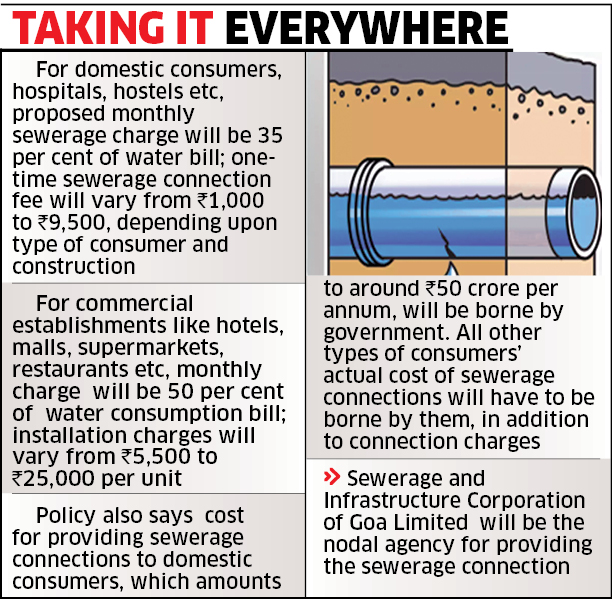 The state cabinet on Wednesday approved a policy for providing sewerage connections to all households, commercial establishments, hospitals, hostels etc in  Goa.

According to the cabinet decision,  Sewerage and Infrastructure Corporation of Goa Limited  will be the nodal agency for providing the sewerage connection.

The fee structure for availing the connection has also been proposed under the policy.

The policy says that for domestic consumers, hospitals, hostels etc the proposed monthly sewerage charge will be 35 per cent of water bill; one-time sewerage connection fee will vary from Rs 1,000 to Rs 9,500, depending upon type of consumer and construction.

However, for commercial establishments like hotels, malls, supermarkets, restaurants etc, monthly charge  will be 50 per cent of the water consumption bill;  installation charges will vary from Rs 5,500 to Rs 25,000 per unit.

The policy also says the cost for providing sewerage connections to domestic consumers, which amounts to around Rs 50 crore per annum, will be borne by the government.

All other types of consumers’ actual cost of sewerage  connections will have to be borne by them, in addition to connection charges, says the policy.

The government aims at providing 5,000 house sewerage  connections per year under the policy.

provide benefits to 80,000 people. In addition, 21 sewerage connections have also been released in

According to the data, only 16 per cent of Goa’s urban population is connected to the sewerage system, as against the national average of 31 per cent.

The cabinet also approved the actions taken so far by the finance department (PPP division) for setting up international convention centre at Dona Paula on PPP basis; the nod  is also for  the request for proposal floated along with the concession agreement.

Furthermore, the cabinet accorded expenditure sanction for works amounting to Rs 545.26 lakh taken up by the public works department.

It also granted approval to hand over 15,807 sq mtrs of land to the agriculture department  for setting up an agriculture processing unit at Shirvoi  in Quepem taluka.