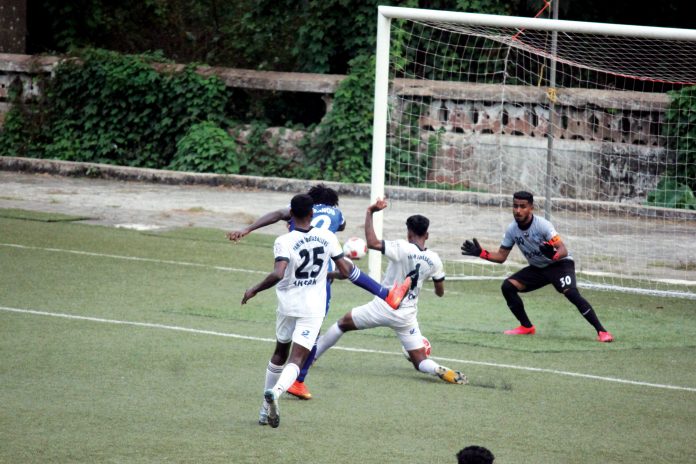 Calangute Association rode on a fine brace from Siddhant Shirodkar to record a thrilling 3-2 win over Panjim Footballers in the GFA’s Selvel Goa Professional League at Duler Stadium, Mapusa, on Tuesday.

Siddhant found the mark in the 9th and 12th minute while Sidharth Kundaikar scored Calangute’s third goal. Panjim scored through Llyod Cardozo (43’) and Pandurang Gauns (48’). Calangute’s Jirjar Terang was sent off late in the second half for receiving double booking.

Calangute Association made two changes as Krishnanath Shirdokar and Siddhant Shirodkar returned in the playing XI while for Panjim there were six changes from their heavy defeat against Sporting Clube
de Goa.

Calangute took the lead out of nowhere in the ninth minute when Akash Sanadi played a back pass to Janio Fernandes, who failed to clear the ball in time which Siddhant Shirodkar snatched and fired home with a fierce shot.

Calangute looked more threatening after scoring the opening goal and in the 12th minute deservingly doubled the lead. Nickson Castanha played a long ball to Kouame Junior, who squared the ball in the area which Preston Rego failed to collect. Siddhant who was lurking in the box fired home from close to make it 2-0.

Siddhant had a chance to complete his hat-trick in the 16th minute when he was set through on goal by Kouame Junior. The youngster made a darting run from the half way line but his final shot was straight at the goal with just the keeper at his mercy.

Janio made up for his first goal error with a crucial block to deny Kouame Junior from inside the box.  Panjim’s first shot at goal came in the 34th minute with Vallmiky testing the keeper from a distance.

Calangute keeper Paramveer Singh came with a diving save to deny Lloyd Cardozo from outside the box. The rebound nearly found Vallmiky but Krishnanth cleared it in time for a corner.

Panjim finally pulled a goal back in the 43rd minute through Lloyd Cardozo, who darted into the box upon receiving a pass from Krishna and scored with a low shot which gave no chance to Paramveer.

Panjim Footballers restored parity in the 48th minute when Pandurang Gauns fired a shot from outside the box which was way beyond
Paramveer’s reach.

But Calangute Association regained their lead in the 57th minute through Sidharth Kundaikar, who scored with a curling effort from inside the box.

Panjim squandered the chance to restore parity in the next minute when Lloyd Cardozo squared the ball to Joyson Gauncar, who couldn’t connect the ball properly though it came off the crossbar.

Preston Rego denied Siddhant his hat-trick from one-on situation with a brilliant save
from close.

Calangute Association were reduced to 10 men when Jirjar received his second booking for bringing down Joyson Gauncar outside the box. However, Calangute held on to their narrow one-goal lead till the final whistle to collect three points.