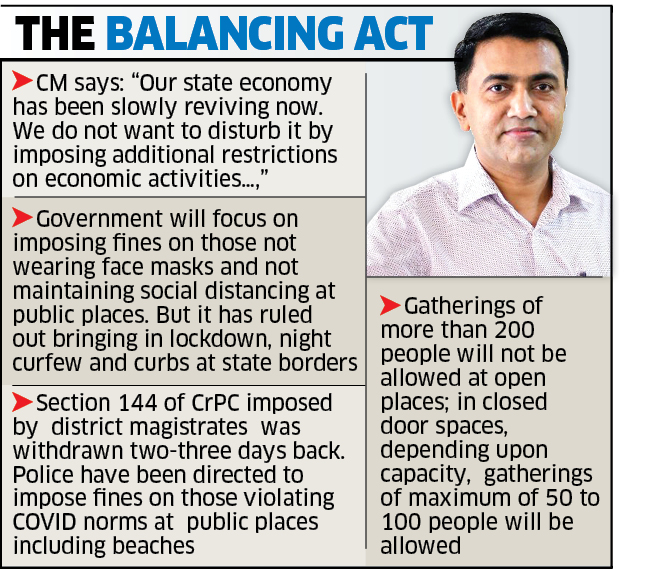 The government decided to focus on imposing fines on those not wearing face masks and not maintaining social distancing at public places. But it ruled out bringing in lockdown, night curfew and curbs at state borders.

The decision came at a meeting  of the State Disaster Management Authority chaired by Chief Minister Pramod Sawant  on Tuesday.

The meeting reviewed the prevailing situation in the state, which  has seen surges in COVID cases from the beginning of March.

Briefing media persons after the meeting, Sawant said the government has decided not to impose additional restrictions considering economic activities.

He said that Section 144 of CrPC imposed by the district magistrates  was withdrawn two-three days back, adding that the police have been directed to impose fines on those violating COVID norms at  public places including beaches.

“The police will penalise the people who do not wear masks and maintain social distancing at public places. To control the spread of the virus, the government has decided to enforce health norms strictly from April 7,” he said.

“Our state economy has been slowly reviving now. We do not want to disturb it by imposing additional restrictions on economic activities…,”  he said, adding that the government cannot impose too many restrictions as Goa is tourist destination.

The government has decided to make extensive awareness on the vaccination drive so that people come forward to take the vaccine; it has made arrangements at 62 centres for vaccination on all days including Sundays and holidays.

“Till date only 1.13 lakh people in the state have taken the first jab of the vaccine. As per the central guidelines, people above 45 years of age should take the vaccine; the number of people belonging to this category is around four lakh in Goa,” he informed.

“I appeal to all the MLAs and other elected representatives to make awareness in their areas about vaccination so that people come forward to take the jab,” he said.

He also said that Goa has an ample stock of vaccine doses:  around 1.5 lakh vaccine doses are available for use and home isolation kits are also available at all health centres.

Disclosing that COVID facilities  at  the Goa Medical College and Hospital, Bambolim, and the South Goa District Hospital, Margao, are running at full capacity,  the Chief Minister said,  “The government has decided to reopen COVID care centres at the Fatorda stadium, the ESI Hospital, Margao, and the Shyama Prasad Mukherjee stadium, Bambolim.”

Sawant also said that a special advisory will be issued to government departments and industrial units to get their eligible employees vaccinated.

Goa to buy over 15 lakh doses of ‘Covishield’