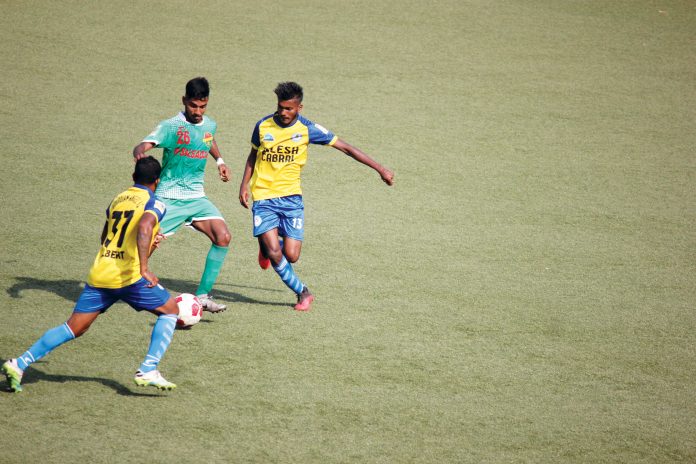 Salgaocar FC made three changes to their line-up which had lost 0-1 to Panjim Footballers in their previous match. Meuren Cruz came in as a U20 player while Saurabh Patil and Stephen Satarkar were the other two changes. Leny Fernandes was the lone change for Guardian Angel SC who held FC Goa to a 1-1 draw in their previous game.

Salgaocar FC didn’t look at their usual best on the field neither Guardian Angel SC seemed threatening as there were just few chances created in the first 45 minutes.

Guardian Angel took the lead in the first minute. On seeing Salgaocar FC back line exposed, Joel Barretto sent a defence-splitting pass to Beneston Barretto, who smashed in a low grounder past the helpless keeper.

In the 12th minute, Salgaoacr FC’s Prathamesh Satardekar tried his luck from a distance but his attempt was brilliantly blocked by Pratheesh Vadakke. Pratheesh was at his best once again to stop Meuren Cruz, but he couldn’t stop Salgaocar FC from scoring in the 16th minute when Steflon D’Costa headed in a Selwyn Miranda’s corner kick.

Guardian Angel SC nearly took the lead once again when Mevan Dias sent a low delivery from the right which was met by Beneston Barreto, but his effort was blocked by Salgaocar keeper Jason D’Mello and the rebound was guided in by Joval Dias, who was flagged offside by the assistant referee.

In the 53rd minute, Guardian Angel SC regained the lead through Beneston Barreto. Jovial Dias, on receiving the ball in the midfield, got past Salgaocar defender and set Beneston with a brilliant through-pass. Beneston’s first touch was brilliant while his finish was equally good as he kept his composure in scoring past an experienced Salgaocar keeper Jason.

At the other side, Salgaocar FC wasted a golden chance to get back into the game when Selwyn Miranda got into the box and with just the keeper at his mercy, the midfielder fired wide.

The introduction of Valentinho Nazareth, who came in place of Antush Moniz gave Salgaocar more attacking opportunities through the wings. The substitute sent in regular deliveries in the area, but the Guardian Angel defence and the keeper managed to thwart the danger.

Guardian Angel scored their third goal in the 80th minute when Mevan on getting the ball from his own territory made a fine run before setting a great ball upfront to Beneston, who covered some distance before shooting upon entering the box. Jason blocked it from the first attempt, but the rebound fell to Beneston who smashed into the empty net to complete his hat-trick.