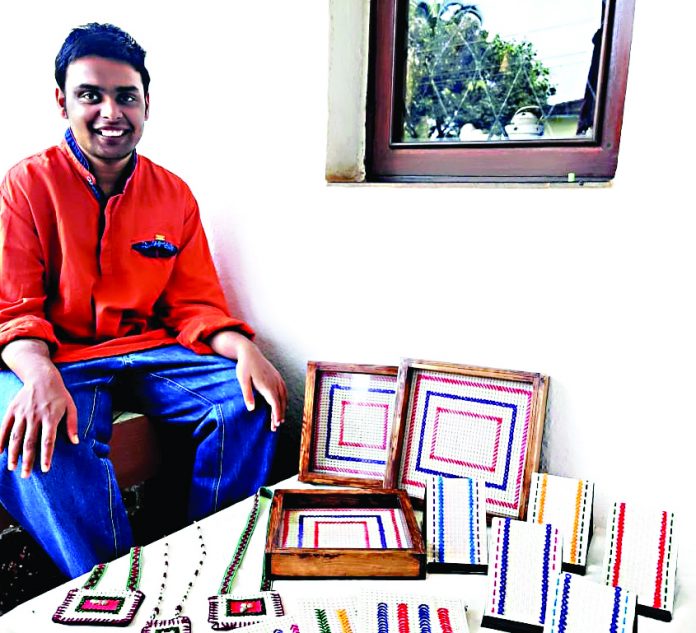 When Ashwin was four and half years old, he was diagnosed with autism. And for a person who could not sit for a minute, had huge behavioural issues, and no special “genius” talents, the 24-year-old lad has now come a long way and together with his mother Elizabeth Kurian Joseph, creates mat embroidery products which are sold under the brand name Ash“win”.

According to Elizabeth, an architect by profession, Ashwin was first introduced to stitching on matte material at the age of 14 as a holiday activity suggested by his teacher Giselle Lobo (a special educator). “It was a simple single stitch. Later I taught him a few more simple stitches and converted them into table mats and table runners for my home,” says Elizabeth. However when Ashwin hit puberty, all teaching activity stopped and it took three years before they could get him settled down with medication. “Meanwhile I started making gifts for his teachers at school for Teachers’ Day with the matte embroidery work done by him. Later, I converted them into jewellery and gifted it to my few friends,” says Elizabeth from Porvorim.

However, when the lockdown was announced last year due to COVID-19, Elizabeth  restarted Ashwin’s matte embroidery work to keep him meaningfully occupied. Ashwin, she says, has no academic skills, he cannot differentiate between colours, but he has skills like matching, sequencing and beading. “So the stitching is done on matte cloth. I mark out the patterns for him and choose the threads and then it is converted into variousproducts. I thought of converting them into trays as gifts. Then with so many online classes my daughter made a mobile stand using old note book covers. Then I hit upon an idea and decorated it with his embroidery work. I knew it would sell as a unique product – it was recycled, foldable, and handmade, just in tune with the Atmanirbhar slogan,” she says.

Elizabeth then posted a photograph on WhatsApp to her friends and on Facebook. And people immediately loved it. Today she has collaborated with a carpentry firm to make trays and a local tailor to make purses. She also customises the colours as per the client’s requirements. The jewellery is assembled by her and her daughter makes the phone stands and the multipurpose stands.

Ashwin, she says, is very fast in embroidery work, you just have to give him the start point and mark the patterns at the corners and he will continue till the thread gets over. “He is very fast and he does it non-stop. For a child with autism who previously could not even sit still for a minute he has come a long way,” she says. And while Ashwin does not understand the concept of money, Elizabeth is slowly teaching him this. “When we go to a restaurant sometimes I pay the bill from his wallet and tell him that if you pay the money, you get food. He understands that much since he loves food,” she says.

Further, she says, that this venture won’t make him financially independent but it is a step towards financially stability. “People who value handmade products, really value it since it is not just a factory-made thing,” she says.

All his products are sold online on Facebook page Ash“win” and Instagram handle is ash.win.joseph and are shipped all over India. The products have also reached remote places like Dharamshala in Himachal Pradesh and Ranchi. In Goa, Elizabeth personally delivers the products and plans to broaden the base and include more products like lamps and cushion covers. “I have got support from so many friends and many whom I have never met. Now they in turn are using these products as gifts,” says Elizabeth. And with so much support from all, I consider it as acceptance and inclusion of people with autism in society. Also, our family bond has become stronger. It’s a win – win situation. For me Ashwin is a winner. “