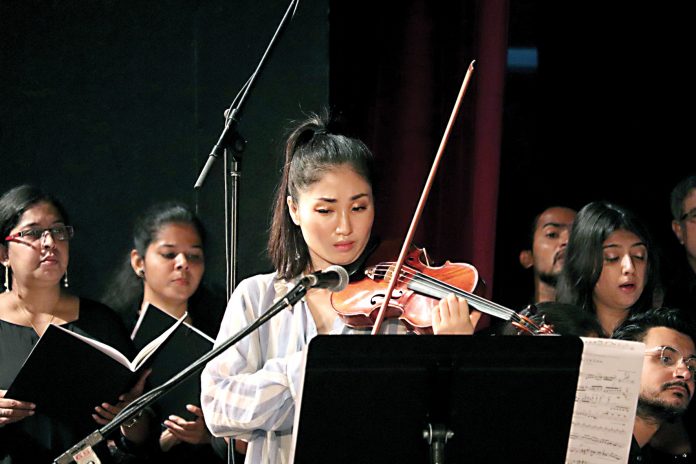 As part of the Ketevan Sacred Music Festival, The Goa University (GU) Choir, under the baton of its maestro, Santiago Lusardi Girelli, with the presence of violin soloist Kushmita Biswakarma, will perform the revised edition of the Big Ocean Cantata, specially recorded for this online festival on April 6, 7 p.m. This soulful piece was specially composed by Girelli and dedicated to the 14th Dalai Lama on the occasion of his visit to Goa. Its live premiere -at a unique concert performed by the Goa University Choir on December 11, 2019 at the Kala Academy – also commemorated the 30th anniversary of the Nobel Peace Prize that was awarded to His Holiness in 1989. Members of the GU Choir felt privileged to have this rare opportunity, describing it as “ethereal, humbling and a true blessing”.

For Girelli, it was one of the most touching experiences of his career as a composer and musical director. “The life of His Holiness has inspired millions around the globe: his struggle for spiritual and physical freedom, human rights and frank dialogue is so inspiring. The Dalai Lama is a living symbol of peaceful coexistence, which is also the motto of our Ketevan Festival, so performing the premiere in his presence was perfect,” he says, adding that they are now excited to share the revised version of this cantata in Ketevan 2021, with Goans, Indians and everyone around the world, as proof that music and arts can lead to the path of coexistence, and promote tolerance and respect between cultures. The cantata is the result of an interdisciplinary research process that combines elements of philosophical and contemporary techniques using Tibetan melodies, Indian ragas as well as sound textures from the musical traditions of the West. The resulting soundscape simultaneously represents the Tibetan aspirations and the crucial need for dialogue as a sincere search for harmony, as fervently preached by the Dalai Lama.

The agogics of the Big Ocean Cantata describes different perspectives via the varied experiences related to the life of the 14th Dalai Lama: his escape from Lhasa and the walk through the Himalayas in 1959, his teachings, and the struggle for peace from exile in Dharamshala.

Written entirely in the Tibetan and Sanskrit languages, this composition comprises of texts used by His Holiness and the ‘Om mani padme hum’ mantra, a six-syllable chant of the bodhisattva of compassion, ‘Avalokiteshvara’. This mantra, which is recited by Tibetan Buddhists, is believed to lead to the purification of the six realms of existence.

The Big Ocean Cantata is a work that celebrates Tibetan wisdom and coexistence and embodies in itself, the struggle for freedom and the symbiosis of the East and West. The title ‘Big Ocean’ refers to the term ‘Dalai’ which in Mongolian language means ‘ocean’- ‘big’. It is composed for an ensemble of soprano soloist, mixed choir voices, violin, piano as well as classical and Tibetan percussion sets (singing bowls and gongs).