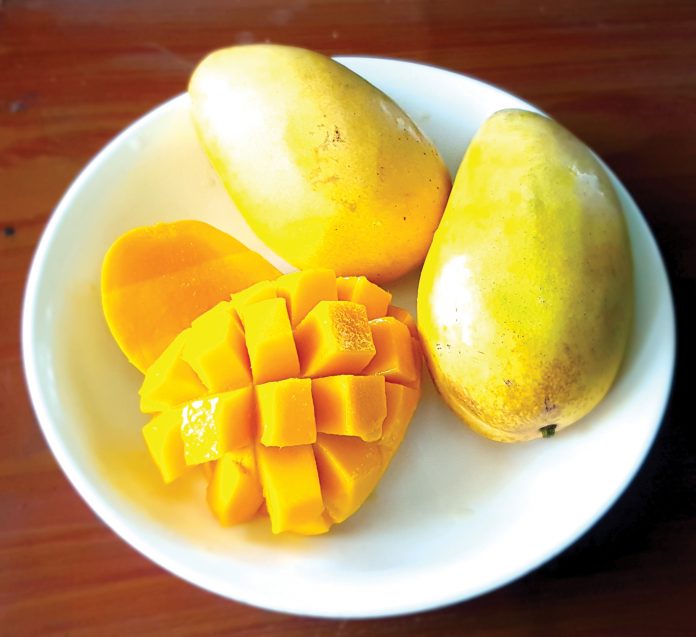 Nature has been the ancient pharmacy for hundreds of generations of Goans. Not satisfied with just one variety of anything – cereal crops, vegetables, fruits or tubers, they invented hundreds of diverse varieties.

Mango is not an ordinary fruit but virtually a free pharmacy and natural anti-viral edible vaccine from nature. During the pandemic, people should consume lots of ripe, healthy local fruits and vegetables. Since the mango season has now begun and will last till end of June, people must consume lots of mangoes taking care to avoid anything bitten by the fruit bats, to remain healthy, boost natural immunity and prevent viruses. Eating quality, ripe mangoes regularly is a good choice these days to fight off COVID-19.

Mangoes have an immensely powerful chemical called Mangiferin, a xanthone found in different parts of the mango fruit, such as the peel, stalks, leaves, barks, kernel, and stone. It has been shown to exhibit anti-oxidant and health-enhancing properties such as anti-viral, anti-cancer, anti-diabetic, anti-oxidative, anti -aging, immunomodulatory, hepatoprotective and analgesic effects. This chemical has proven activity against HIV, herpes, polio and influenza viruses. A study by Maurya and others revealed last year that Mangiferrin found in mangoes has significant binding affinity towards spike glycoprotein of SARS-CoV-2 and ACE2 receptor and may be useful as a therapeutic and/or prophylactic agent for restricting viral attachment to the host cells. Eating mangoes regularly boosts immunity and wards off viral infections.

The original home of mango is in Assam, Burma (Myanmar), and Thailand. The word ‘manga’ is of Malay origin. According to the eminent historian of Indian agriculture, M S Randhawa, no other fruit is so strongly associated with the Indian civilisation as the mango. The genus Mangifera has 41 valid species. All edible species belong to Mangifera indica.

The mango tree attains an age of hundred years or more. India has more than 1000 cultivars (different types) of mango. Goa itself boasts more than 120 cultivars. Preferably buy locally produced mangoes but any other variety imported in Goa would give the same benefits. The diversity of mango varieties in India is utterly amazing. In Uttar Pradesh you get Dasheri, Safeda, Fazri, Chausa, Taumuria, Langra and in Bihar Hemsagar, Krishnabhog, Sindurai, Sukra are popular. West Bengal is famous for Murshidabadi and Fazli malda. In Andhra Pradesh they prefer Rumani, Neelam, Benishan, Totapuri, Malgoa and Goabunder varieties whereas in Karnataka they cultivate Maddappa, Peter, and Fernandin. Originally Goan, the Alphonso (hapus) variety is popular in Maharashtra.

Basically, mangoes can be divided in two types -the sucking and the table type. The sucking type has thin juice and more fructose. Commercial table types have thick pulp and more sucrose. The traditional knowledge of mangoes in Goa is vast and well documented. Somehow the new urban society of Goa seems to have forgotten the great Goan mango heritage which saw beneficial uses in several recipes of raw and ripe mangoes. The pandemic now gives an opportunity to relearn the time-tested beneficial effects. The Portuguese missionaries found that grafting is helpful in introducing beneficial traits like colour, size, shape, sweetness, or sourness.

Exhibitions held by the agriculture department and ICAR had indicated more than 120 varieties of local mangoes. But only those which are produced in some marketable surpluses are sold. These local Goan varieties include Mankurad, Hilario, Salcete Mussarat, Bardez Mussarat, Malgesh, Nicolau Afonso, Xavier, Udgo, Culas, Fernandin, Goa Alfonso, Karel, Furtad, Costa, Sakri, Rosa, Bishop*. Mankurad is very popular as table fruit. Hilario is the sweetest mango in India. Karel is preferred for pickles. Mussarat is good for jams and jellies.

The famous Portuguese doctor Garcia de Orta in his ‘Colloquios dos simplices e drogas e cousas medicinais da India’ (1567) devotes an entire chapter to mango. He found that baked mango seeds were used against congestion and the bitter mango kernel was used in Goa as intestinal deworming agent. British traveller John Fryer (1673), the East India company surgeon, praised the mango varieties found in Goa. Captain Alexander Hamilton (1727) had written: “The Goa mango is reckoned the largest and most delicious to the taste of any in the world and the wholesomest and best tasted of any fruit in the world”. The French doctor Bernier (1765) who had visited Goa after tasting the mango jam/jelly wrote: “there is no more delicious jam or jelly in the world”.

Diversity and popularity of mangoes in Goa had attracted the attention of the colonial powers. The British took the Goa Pires variety to Bombay and called it “Bombay pairi”. From Bombay, mango reached the islands of West Indies under the British control. Famous voyager Captain Cook found mangoes in Jamaica in 1788. The Jamaican still call the original Goan mangoes “Bombay mangoes”. The Moghuls and the Peshwas of Pune loved mangoes of Goa. During 16-17th century, the Alphonso mangoes were sent to Delhi for obtaining the favours of the Moghul emperors. The Portuguese governors in Goa used to send baskets of Goan Alphonso and Fernandin mangoes to the Peshwas of Pune. Portuguese diplomat at Pune, Vithalrao Valaulikar wrote in 1792 to the governor in Goa to ban all private trade in mangoes from Goa to Deccan markets to increase the novelty and value of Goan mango varieties. The Portuguese had even introduced a system of special permits for private traders to export prized varieties of mangoes from Goa.

Now scientists are convinced that indeed mango is a powerful pharmacy of nature and it can prevent viral diseases. Eat mangoes and stay healthy.