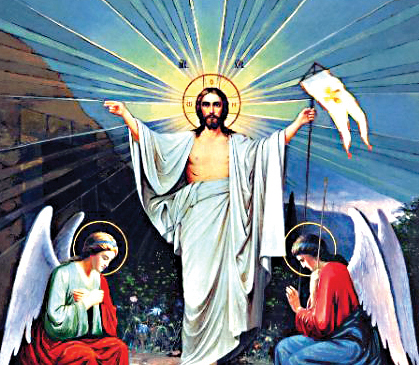 Christians all over the world will celebrate the Resurrection of Jesus Christ tomorrow, Easter Sunday. But what is the significance of this?

Catholics around the world will be celebrating, notwithstanding the still prevailing pandemic COVID-19, the Easter Solemnity with religious fervour and exultant joy on April 4. Easter is the celebration of the Lord’s Resurrection on the third day after His death. It is preceded by a sacred Easter Triduum that commences with the Mass of the Lord’s Supper in the evening of Maundy Thursday.

In His own words, Jesus said: “I give you a new commandment, that you love one another… By this everyone will know that you are My disciples…”  (Jn 13:34-35).

By dying on the Cross and shedding His own blood, Jesus manifested God’s sublime, immense and infinite love for all the peoples. He stated: “There is no greater love than this: to lay down one’s life for one’s friends” (Jn 15:13). He considers the entire human race as His own brothers and sisters for whose sake He laid down His life. The sinners and enemies alike are His own. From the Cross, as if gazing on the onlookers and the generations to come, He imparted an eternal blessing as He uttered in a feeble voice the following words: “Father, forgive them; they do not know what they are doing” (Lk. 23:34).

The Resurrection of Jesus is a mind-boggling event. The human mind fails to grasp it. No science can unravel it. By faith and faith alone, the mystery of Resurrection unfolds the supernatural, transcendental reality to our limited minds.

All the four evangelists describe vividly the Passion, Death and Resurrection of Jesus. However, John provides more information than the other three. For instance, John incorporates Jesus’ Prayer. Jesus looked up to heaven and prayed: “Father, the hour has come! Give glory to Your Son that Your Son may give glory to You…” He then prays for His disciples: “For these I pray… they are really Yours… these are in the world… O Father, protect them…” Prior to His death, He prayed for all: “I pray also for those who will believe in Me… that all may be one as You, Father, are in me and I in You… Father, all those You gave Me I would have in My company where I am, to see this glory of mine which is Your gift to Me…” (Jn 17:1 ff).

This prayer of Jesus encompasses His intimacy with His Father, to whose care He entrusted the entire humankind that would be set free by His Death and Resurrection.

Adding to the prophetic utterance of the high priest, Caiaphas, John makes a startling revelation that Jesus would die “not for this nation only, but to gather into one all the dispersed children of God” (Jn 11:52).

Further, John discloses the coming of the Paraclete, the Holy Spirit, as promised by Jesus. He records the words of Jesus: “Yet I tell you the sober truth: It is much better for you that I go. If I fail to go, the Paraclete will never come to you, whereas if I go, I will send him to you and… he will guide you to all truth” (Jn 16: 7, 13) …“will instruct you in everything, and remind you of all that I told you” (Jn 14:26) “…and, above all, he will be “with you always” (Jn 14:16). The Holy Spirit which is the gift of Jesus to the peoples, empowers men–women to work out their own redemption.

At around three o’clock in the afternoon, Jesus breathed His last. At that moment, unusual happenings took place. The earth quaked, boulders split, tombs opened (Mt. 27:52), darkness all over, curtain in the sanctuary torn in two (Lk. 23: 44-45). The centurion with other soldiers who kept a strict watch over the body of Jesus exclaimed: “Truly, this man was God’s Son!” (Mk. 15:39).

Joseph of Arimathea, an influential man, along with Nicodemus, sought the permission of Pilate to bury the body of Jesus. Following the Jewish burial tradition, they wrapped the body of Jesus with a cloth and put in myrrh, aloes and perfume. He was then buried in an unused grave found in the garden very near to the place of His crucifixion. They did the burial hurriedly as the Jews were getting ready for the Preparation Day on the Sabbath. A stone was laid upon the place of burial where a guard was posted so that His disciples could not steal His body and tell the people that Jesus had been raised from the dead.

The women who had seen the grave, left early morning to the place where Jesus was buried. Among these women were Mary Magdalene and the other Mary. Once again, there was an earthquake, and to their amazement, they saw an angel rolling the stone and sitting upon it. The angel spoke to the women: “Do not be afraid. The Jesus whom you are looking for, has been raised.” The angel instructed them to pass on the good news to His disciples that He has been raised, and has left for Galilee.

The women and His disciples, overjoyed with the news, left for Galilee where Jesus arrived much before them, and greeted them joyfully by saying: “Peace. Do not be afraid!” The women touched His feet with reverence, and ran to spread the news of Jesus’ Resurrection to all those they came in contact with.

The Resurrection of Jesus is central to Christianity. Without the belief in the Resurrection, Christianity is moribund. Thomas, known as doubting Thomas, refused to believe that Jesus had risen. However, when Jesus showed him His hands with nail marks and His side pierced, Thomas exclaimed: “My Lord and my God!” Jesus then said to him: “You became a believer because you saw Me. Blest are they who have not seen and have believed” (Jn 20: 24-29).

What about us? Certainly, we have not seen Jesus and yet our faith, filled with hope, prompts us to believe that He has risen and is seated at the right hand of God, the Father. No doubt, He will return triumphantly at the end of the world, and grant a share in His glorious resurrection to all those found awake and alert at His final coming.

Wishing our esteemed readers a joyful and blessed Easter 2021!