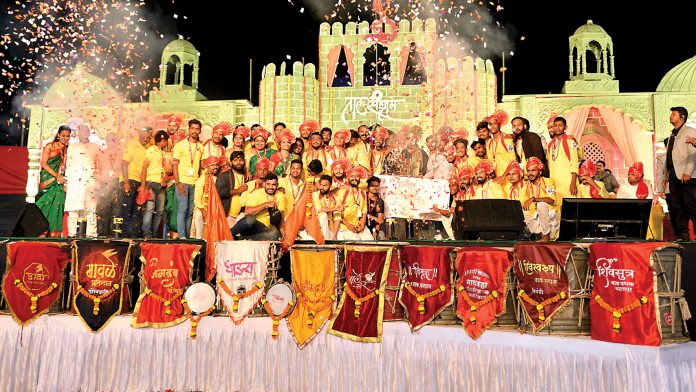 The Jagdamb Dhol Tasha Dhwaj Pathak  (JDTDP) formed in December 2019 is known for its famous Jatrotsav of Goddess Aai Navdurga, popular across the state.

With over 100 participants from across the state from various places like Marcel, Madkai, Shiroda, Vasco, etc, their teacher Sairaj Naik has been the brain behind this group.

Indeed, the Jagdamb Dhol Tasha Dhwaj Pathak participates in various functions across Goa, especially at Shivjayanti. Having first made their foray with dhol tasha competitions in Belgaum and in Mumbai, they won the first place at Taal Avishkar organised by Arambh Dhol Tasha Pathak BGM in 2019 and then won the third place in Taal Sangram organised by Arambh Pratishthan in Mumbai in 2020. Recently, they returned from Karwar where they performed for a function.

“We have the dhol tasha beats running in blood since birth because of our traditional Goan Shigmo. And if you listen to our (Jagdamb’s) beats, you will definitely get a flavour of Goan Shigmo,” says Rahul Lotlikar who is a member of the group.

However, the group believes that Puneri style dhol tasha pathak which is highlighted during Shigmo doesn’t belong to Goa’s culture and hence they do not participate at the festival.

“I feel really proud to be a part of JDTDP, which has competed with mighty groups from Karnataka and Maharashtra and earned good respect in these neighbouring states,” adds Lotlikar. “We look forward to developing ourselves further and dream of performing abroad in the coming years.”