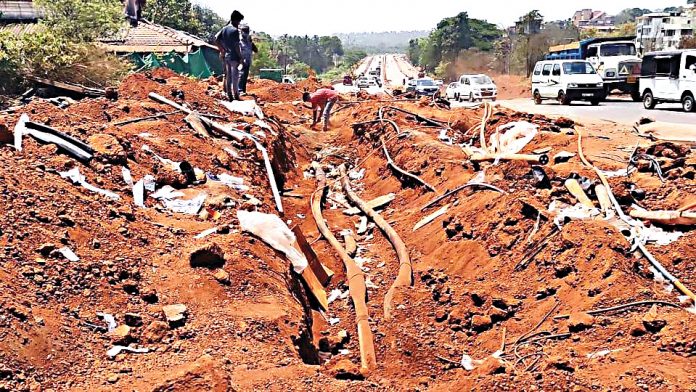 Close on the heels of the incident of damage to water supply pipeline, two power cables from the Tivim station to Saligao sub-stations got ruptured during highway expansion work at Peddem resulting in power outage in Saligao, Pilerne, Calangute, Candolim, Sangolda, part of Porvorim and Pilerne industrial estate which comes under the Saligao sub-station.

However, repair work of the power cables was taken up on war footing and one line was repaired on Friday and power supply restored while repair work of another power line is underway and is expected to be completed by late night.

According to information, the incident of two lines of underground power cables of 33KV lines which provides feeds from Tivim sub- station to Saligao substation got ruptured at around 11.30 am on Thursday at Peddem allegedly due to negligence of highway contractor as a result areas like Saligao, Pilerne, Calangute, Candolim, Sangolda and part of Porvorim, Pilerne industrial estate which comes under Saligao sub-station were affected.

On receipt of information, electricity department officials along with the contractor rushed to the spot. However, they faced difficulty to trace the exact location of the damage. Subsequently after finding the location, repair works were started.

Assistant engineer Subhash Parsekar said that work of repairs continued the whole night and on Friday morning, work was completed however again a fault was detected.

“We have completed work on one line and power supply has been restored to the affected areas and work on the second line is underway and we expect to complete it by late night,” said Parsekar.

Sources informed that this is not the first incident of damage to power cables during highway work but this time both cables were damaged and they even did not inform the department.