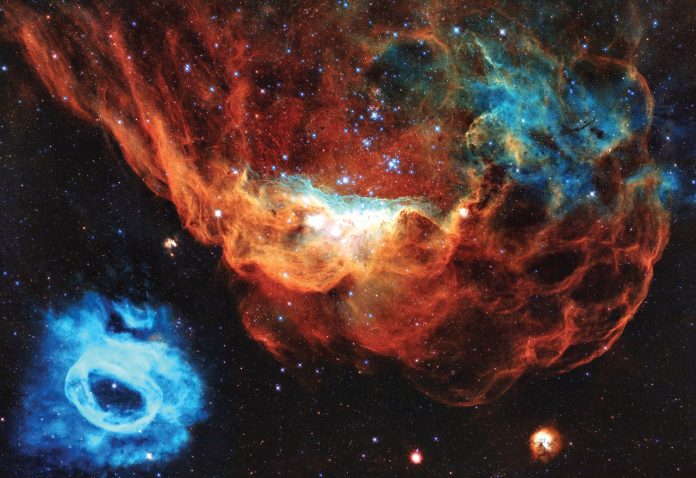 On April 24, 1990, the NASA/ESA Hubble Space Telescope was launched aboard the Space Shuttle Discovery, along with a five-astronaut crew that helped to position Hubble in orbit approximately 570 km above the Earth. Ever since, the telescope has opened a new eye onto the Universe, which changed our understanding of astronomy. The telescope is also famous for its beautiful images of other planets, nebulas, and galaxies.

Each year Hubble uses a small portion of its precious observing time to take a special anniversary image. This year, NASA and the European Space Agency have published the30th anniversary image from Hubble showing two nebulas known as NGC 2014 and NGC 2020.

The sparkling centerpiece of NGC 2014 is a grouping of bright, hefty stars near the center of the image that has blown away its cocoon of hydrogen gas (which we see as red in this image) and dust in which it was born.

The blue-coloured nebula below it is NGC 2020, and it has been shaped by one mammoth star that is roughly 15 times bigger than our Sun. The brilliant blue colour of this nebula is caused by oxygen gas that is heated to roughly 11,000 degrees Celsius!

Although they seem to be separate objects, these nebulas are part of one giant region in which new stars are forming. These stars have short lives of only a few million years, compared to the 10-billion-year lifetime of our Sun.

ESA/Hubble is also inviting everyone aged 3 to 30 to submit an artistic creation to celebrate Hubble’s birthday! This includes drawings, paintings, photography, sculptures, and graphic designs which thank and celebrate the Hubble Space Telescope! Check out how to participate here!

The Hubble Space Telescope is about the size of a large school bus!

Develop a love for science in your child