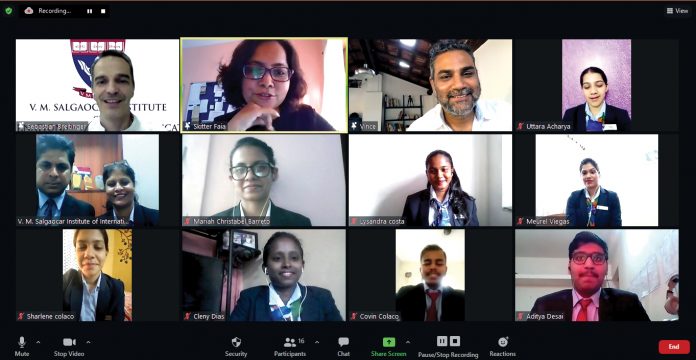 As part of its ongoing series ‘Culinary Conversations’, the students of V M Salgaocar Institute of International Hospitality Education (VMSIIHE), interacted with musician, serial entrepreneur, photographer and filmmaker, Vince Costa on his documentary ‘Saxtticho Koddo: The Granary of Salcete’. Vince’s documentary is based on rice cultivation. The film has received accolades at screenings in Goa and at film festivals across Europe where it was screened and has brought about conversations on agriculture and rice cultivation.

The 37-minute film puts the spotlight on Curtorim, the village Vince hails from. Through the ages, this village has had strong agrarian heritage and been synonymous with the vast production of rice, thereby earning the title of ‘Saxtticho Koddo’ meaning the granary of Salcette.

Over an hour-long online session students of VMSIIHE interacted with Vince on everything related to rice cultivation, foods made out of rice and storytelling.

To a question asked by a student Covin Colaco on how agriculture can be encouraged among students, Vince said: “We have outsourced our responsibility towards food only to the farming community because the rest of us are busy doing other things. I think if we change that perspective and we look at food as our own responsibility, we’ll take the onus upon ourselves to grow that food and obviously, our kids will look at us doing it and get in line with that culture.”

Speaking candidly with students of VMSIIHE, Vince said he didn’t realise how much he didn’t know about his own village. “There is so much wealth of knowledge available for us to learn and absorb. We love to go to school, we love to get great marks and that’s great. But we are disconnected from nature, our history, culture and traditions,” he said.

Aditya Desai, a student of VMSIIHE who was part of the discussion felt Vince Costa’s words resonate within him. “I was so floored with how passionate he is, how he has stayed so true to his Goan roots despite how much he has achieved,” said Aditya.

“The documentary was a pure visual representation of authenticity and rawness, it was an eye-opener. I took away so much from the film and felt connected to the community,” added another student, Muerel Viegas.