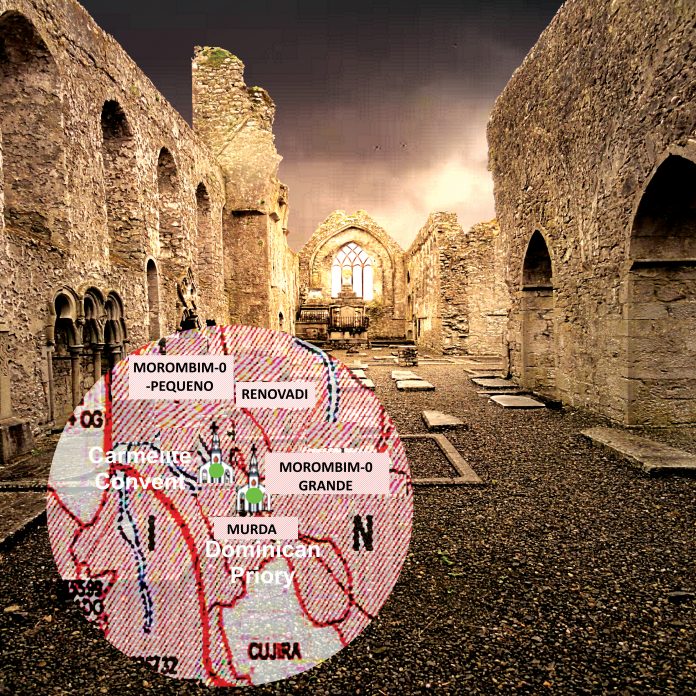 Remnants of wooden boats found at the site add credence to the traditions of a settlement of Gujarati traders at Kujira, Santa Cruz. Sitting at the end of a well dredged waterway from river Mandovi, it could have been one of the many trading ports at the mouth of the river. There is a possibility that there was a Muslim settlement too on the banks of the waterway; traditions speak of an Arab settlement on the same waterway, about a kilometer downstream from the Gujarati settlement. But in course of time the waterway could have got silted or the trade slackened, and the small ports could have fallen in disuse.

Whatever the reason, apparently at some point, almost the whole waterway seems to have been put to a different use; a bund was built across it, on which the road from Santa Cruz to Merces now runs; a sluice gate was put on the bund and water conserved for paddy cultivation on its bed. It is probably this bund which cut Kujira into two, the downstream half going to Murda and the upstream half becoming an independent village, which got eventually amalgamated to Santa Cruz.

The present Santa Barbara ward of Santa Cruz (which was earlier called Dom Bras) and the old Santa Barbara ward of Morombim-o-Grande lie across the paddy fields and the waterway we have discussed earlier, about two kilometers apart. Today, with the National Highway cutting through, it is difficult to imagine that this could be a single village. It consisted of a vast stretch of paddy fields extending from the bund across the Mersecem Tolem to the backwaters of river Mandovi, with inhabitation on either side of it; very much like Durgavadi. One needs to keep in mind that at that time the paddy fields were as important, perhaps more important, to the definition and delimitation of the village as the inhabitation; it is the farmlands that connected to the gamvkari. Probably the village was originally called Morombi. That’s the feeling one gets when Filippe Nery Xavier lists ‘Santa Barbara or Morombim’ as a ward of Morombim-o-Grande.

In 1617 the Dominicans established a church and a priory (where friars resided) in Morombim. [Gabriel de Saldanha, 1898: Historia de Goa – Politica e Arqueologica, vol 2, 77] The church was dedicated to Santa Barbara; and it was designated as the parish church of Morombi, and the village was named as the Santa Barbara parish. Historical sources are very clear that it was distinct from the parish church of Santa Cruz, which was dedicated to the Holy Cross; for instance Filippe Nery Xavier lists them separately as Santa Barbara and Santa Cruz. [Xavier, 1907: Bosquejo Historico das Comunidades das Aldeas dos Concelhos das Ilhas, Salcete e Bardez, vol 1, 86] So does Gabriel de Saldanha: “a de S Barbara em Morombim e a de Santa Cruz em Calapor” (that of S Barbara in Morombim and that of Santa Cruz in Calapor). [Gabriel de Saldanha, 1898: 31] Dominicans also built a chapel near Renovadi which was dedicated to Our Lady of Mercy, which was later raised to be the parish church of Merces. References to the Dominican priory and church in Santa Barbara give an impression that it owned vast land. At the time the religious orders were suppressed in the middle of the 19th century, the landed assets of the Dominicans at Santa Barbara were valued at about current Rs 25 lakhs. [Xavier, 1907: Bosquejo Historico das Comunidades das Aldeas dos Concelhos das Ilhas, Salcete e Bardez, vol 2, 179]

That could mean that almost the entire Santa Barbara ward, or at least the paddy fields and coconut groves therein, were owned by the convent. It is known that the Dominicans were very rich. According to Gabriel Saldanha, their church in Old Goa was the ‘most beautiful’ of all churches in Goa, and its sacristy was endowed with most exquisite silverware. [Gabriel de Saldanha, 1898: 81] In the neighbouring ward Dom Filippe or Palmar Sequeira, the Theatines owned that whole ward as the name indicates: Dom Filippe was the administrator or the superior of the Theatine congregation and Jose Maria de Sequeira was the Portuguese official who bought the coconut grove after the suppression of the religious orders. [Xavier, 1907: Bosquejo Historico das Comunidades das Aldeas dos Concelhos das Ilhas, Salcete e Bardez, vol 2, 180] The same could have been the case with the landed assets of the Dominican priory at Santa Barbara. Dom Bras could have been the superior of the priory or a Portuguese official who bought the property of the priory and the church. Filippe Nery Xavier categorically states: “Presently the wards (povoacoes) are named after the owners of the coconut groves into which the village is divided.” [Xavier, 1907: 180] Between 1841 and 1851, the Santa Barbara church was occupied by the Hospital de Todos os Santos e de Nossa Senhora da Piedade belonging to the Misericordia de Goa, which is till the church was in ruins. [Rodrigues, 2018: Souls, Spices and Sex – The Struggle for European Ascendancy in Portuguese India, 41]