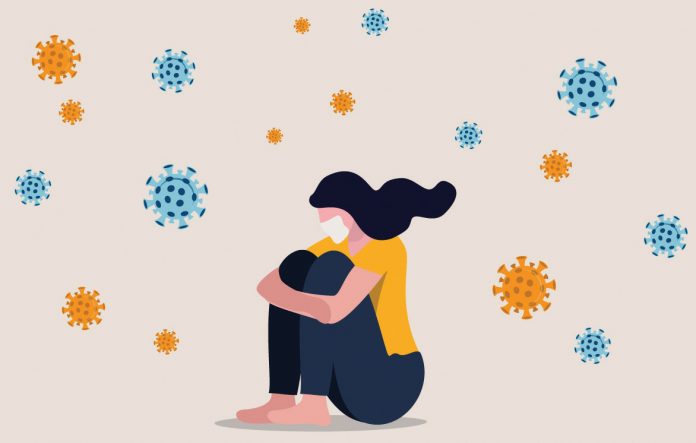 One year since the pandemic induced lockdown, the mental health crisis
is still unfolding across India

One year ago, Indians locked down in their homes as COVID-19 tightened its grip over the country. When they emerged months later, tentative and timorous, the world many knew had changed, perhaps forever, leaving them grappling with a spectrum of mental health issues ranging from depression to paranoia.

For millions of Indians – students and their teachers, workers and high-end corporates, the young and the elderly – the process of adjustment hasn’t been easy. Coping with loneliness, anxiety and job losses, many have overcome the inherent bias towards acknowledging that they may have a mental health problem and have reached
out for help.

The infection graph rose, fell and now that it is rising again, the panic has increased instead of receding, says a young woman in Ghaziabad who recalls the year since March 25, 2020 when the nationwide lockdown was imposed forcing a sudden isolation on people and a dramatic change in life as they had always lived it.

“I still don’t feel good whenever I go out. My sleep pattern is still very disturbed. It has been so long but my body is still coming to terms with staying indoors and I am not comfortable stepping out. My menstrual cycle is disturbed. This is impacting my overall mental peace,” she says.

Kundan Sahi, an IT professional in Kolkata, reports similar problems.

“I don’t know how long this will continue. There is always the fear of losing the job. Insecurity has taken away my sleep. I can’t sleep, I can’t eat. I have been taking help from a psychologist to come out of this,” he says.

It is an epidemic of sorts and the two young professionals are only the tip of the proverbial iceberg, say mental health specialists across the country, viewing with alarm the overwhelming dimensions of a crisis that is
still unfolding.

Cut off from friends, extended family and colleagues as the pandemic raged outside, many people came out into a changed world order with trepidation, they say. If some retreated into a shell, there were those who inflicted injuries on themselves, fought suicidal feelings and also those who ended their lives.

“Mental health cases have gone up since the lockdown began and the effect the pandemic is having on the mental health of the population at large is concerning to say the least,” says CEO of Apollo TeleHealth in Hyderabad, Vikram Thaploo.

The fear of catching an infection, social isolation, and the loss of loved ones is often exacerbated by the distress caused due to unemployment and loss of income, he adds, fearing the problem could escalate when “bottled up cases” come forward.

“Unless mental health is treated as a core element in our response to the pandemic, the long term social and economic costs will be severe,” he notes.

Of the 3,000 odd mental health consultations over the past year till February 2021, about 65 per cent related to anxiety and depression and most people were in their 20s and 30s. Sandeep Grover of the Department of Psychiatry at PGIMER in Chandigarh says stress levels are really high with people restricted indoors and both school work and office work being going online.

Cases of depression, anxiety, fears, and phobia have increased as have issues such as forgetfulness and post-traumatic stress disorders.

The problems are mirrored elsewhere in the country. According to director of the Institute of Mental Health in Chennai, Poorna Chandrika, the stigma associated with COVID-19 patients and their families made matters worse.

“What we noticed was an adjustment disorder, a peculiar behaviour among people who were unable to cope with the various physical and psychological problems spawned by the pandemic. Then there was loneliness, job loss and anxiety as well,” says Chandrika. In the initial phase of the lockdown, says Prabha Chandra from Bengaluru’s National Institute of Mental Health and Neurosciences (NIMHANS), patients were coming with depression for having contracted the coronavirus.

A year after, problems persist. “Though the risk has reduced after the lockdown was lifted, we see cases of mental problems still coming because life has not fully normalised,” says Chandra. Now, a different set of people is coming forward. They are those who lost their jobs, especially in the IT sector, she says. In Kerala, executive director of the Kerala Social Security Mission (KSSM), Mohammed Asheel, says over 73 lakh ‘psychosocial support’ (PSS) calls have been made to mentally ill patients, children with special needs, guest labourers, and elderly people living alone during the lockdown period.

The COVID dashboard website of the Kerala government reveals that over 30 per cent of the 76,783 cases of counselling were given for issues related to stress.

“The impact of the lockdown has been massive. It redefined social practices and norms we have been following for decades,” adds Hiralal Konar, a medical practitioner
in Kolkata.

Psychologist Suman Chaturvedi, who also practices in the city, says some patients were suicidal. “And some wanted to go out like normal times not abiding by any restrictions. This has been affecting the attitude of the people – mostly the children and old, sick people,” she says, fearing long-term repercussions.

“We are yet to come out of this…. we are probably heading towards another round of lockdown for the second wave approaching. The only way to combat this is to stay with your family, think positive and change your outlook in accordance with the altered situation,”
she says.

The lockdown, adds Delhi-based clinical psychologist Manju Mehta, had affected people adversely, whether old or young, across all ages and socio-economic classes.

As the national lockdown completes one year, there is another dimension too – healthcare professionals tasked with ensuring the mental and physical wellbeing of people. It required not just long hours but thinking on their feet. Consulting psychiatrist in Mumbai, Manoj Bhatawadekar says that he once had to intervene in the case of an autistic 12-year-old who needed to go for a walk. If not, he would turn violent. “I not only consulted the parents but convinced the local police station as well as housing society management committee about the medical needs of the boy… It was an unique experience
for me,” he said.

At the Lokmanya Municipal Medical college and general hospital at Sion in Mumbai, most patients who needed help for mental health related issues were from slums. Head of the department of psychiatry at the college, Nilesh Shah, says: “Some of the cases had phobia of the virus, while others post recovery had an attack of depression. The people in the latter category would feel extremely depressed in the first half of the day but they would feel better in the evening.”

Additional professor at KGMU in Lucknow, Adarsh Tripathi says stress issues left unattended can result in suicidal tendencies. “This has been a global phenomenon… adolescents and students in the age group of 14 to 24 years are the most vulnerable,” he says. The number of patients being referred to the psychiatry department of the hospital has gone up significantly, he adds. “Economic activities came to a halt, businesses shut down. Besides, insecurity about the future, jobs, marriages and education all had a direct psychological impact on people,” he says.

As COVID cases continue to rise, a grip on the infection as well as on the mental health impact seems to imperative for India and Indians to come out of the crisis. A view endorsed not just health professionals but also
their patients.