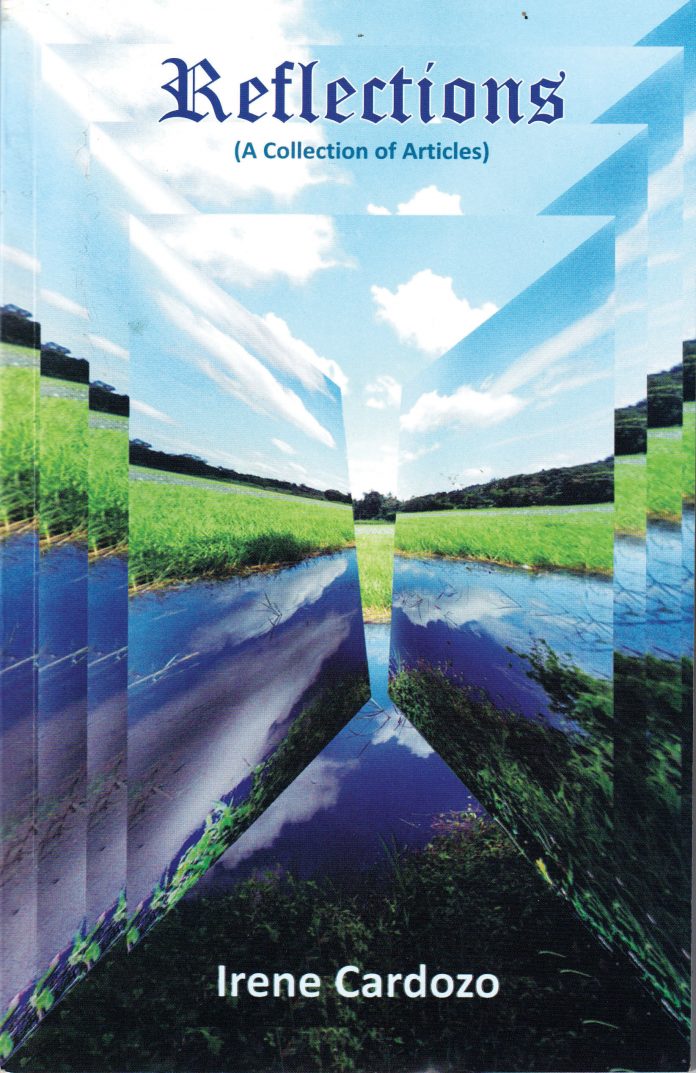 In the small world that is Goa, walls of language, dialect, and script can sometimes block us and stop us from reading one another. Likewise, we might be in the dark about the creative energies and the potential of others in our small state.

Irene Cardozo’s recent book titled ‘Reflections: A collection of articles’ with its cover designed by former Navhind artist-photographer Willy Goes, fell into my hands recently. Irene, as most would know, has been prolific in tiatr, acting, stage, mando, radio broadcasts, audio albums, folk songs, religious songs, and more. She has also been an educationist – teaching all the range from the primary to the higher secondary level, and ending up as a headmistress.

Her book is a compilation of articles. Sometimes, articles compiled into a book don’t read well.  Especially those which have been written for a newspaper can seem dated and sit only uneasily together when published many years later. These get dated, are meant more for an occasion, and often don’t date too well. In this volume, however, the essays are quite interesting.

Bombay-born Irene (nee Rosario) says the book is the outcome of observing people and attitudes and spending the last couple of years to reflect and distil her thoughts. Some of these were published earlier.

One that caught one’s attention immediately is titled ‘Some Tips to Make Yourself Miserable’. The “advice” here includes: think only of yourself; focus on your past failures; stay to yourself; wallow in self-pity; worry and be anxious about the future; neglect your meals and rest; ignore possible hobbies; and, finally, make sure you spread your misery to those around you!

The book is divided into six sections – covering fields the author describes as personal, educational, women, tiatr, political and general.

These focus on the diverse themes with which Irene herself has been linked. Published in February 2021, the book has a foreword by professor Edward de Lima of Porvorim, who sadly passed away very recently and very suddenly. How fast time can change things.

Some themes which Irene Cardozo tackles include the theft of someone else’s creativity (plagiarism); why people cry; suicides; and the need to treat children with dignity.

In The Media Hounds, Cardozo argues that the Indian news channels (sometimes other sections of the press too) act like predators dealing with their prey. “It (the predator) lurks around in the shadows, waiting to sense the presence of its meal somewhere nearby. It can smell its food…” (p 213).

Given her educational background, the essays are mostly argued out well, and in a catchy manner.

Like any senior citizen, Irene prioritises “The Abysmal State of Healthcare in Our Country” (p 192-3) Likewise, her educator’s-woman’s touch perhaps leads her to focus on themes that other writers might not think twice about: such as the hazards of children driving.

Some of the earlier chapters have a personal focus; but not only on her dad, but his work for two Lebanese women – Josephine and Helen Haugaz – who had a cashew nut processing factory in the Goa of the 1930s, for instance! The story of her hardworking, sacrificing parents (especially her father) is touching.

Schools, teachers, value education, theatre in school are some of the themes one could, understandably, expect here. Her essays on tiatr and politics also add value, given both her own connection with the former and hubby Tomazinho Cardozo’s with the latter. Retirement and alcoholism are themes touched on as well.

Irene, like many educators of her generation, distrusts social media. If one were to go merely by the count, she sees five advantages of social networking, and nine disadvantages (p 174-176).

One could take up an issue over some arguments. One chapter is on why conservative parents in parts of India don’t want to get their children (mainly daughters, one would guess) to be too highly educated.  The reason: fears that they won’t find “suitable marriage proposals”. This touches on many complex related issues, including gender relations and expectations in a traditional society, the shrinking number of young men in quite a few branches of higher education especially in non-tech universities, and the like.

Likewise, animal rights campaigners are unlikely to appreciate “The Menace of Stray Animals”.

Irene offers a paean of praise to Catholic nuns, in this case of Mother (Saint) Teresa’s blue-bordered sari ones.  This was, of course, written long before the current controversy over two nuns charged with “conversions” of postulants who were accompanying them in Uttar Pradesh recently. Former Supreme Court justice Katju has responded sharply to that in an article titled “Indians Should Learn From Catholic Nuns”, but that is another issue.

Only her third book so far, this follows two works of translations (which is also an important task).  “Only” because, compared to her creative work in other fields, one would have expected a lot more.

But Irene Cardozo’s is an interesting piece of writing. This could become more apparent once more readers in English start appreciating it. Such is the case with many of writers, artistes, and theatre personalities, especially those who are more active in languages and cultural work other than English.  Such divides need to be overcome.

In our multilingual Goa, how effectively do we get to read the ideas expressed in diverse scripts or tongues? The problem seems to be that coming out with a book still seems to be a slow and painful process; that those working in the other creative fields might not prioritise print and books. But, besides all this, the potential a person doesn’t seem to be getting noticed by diverse audiences as well. That’s a shame.