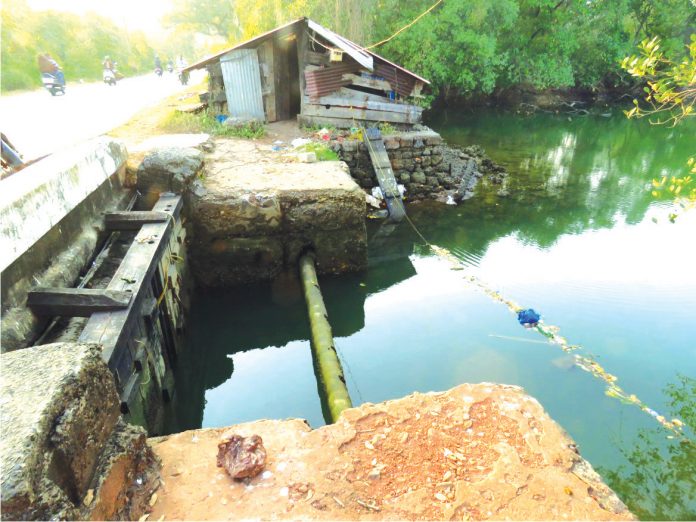 In the earlier article, we became aware about the possible birth of the identity of Calapor (Calapur) or Santa Cruz (St Cruz). We also passed through the historic Four Pillars (Char Khambe), built to welcome a Portuguese prince into the village around
1896 AD.

However, just before one approaches the Four Pillars, one must take time off to stop near the shed made for Ganesh idol immersion and educate oneself about the ancient methodology of trapping and using the tide waters of the sea, with a sluice gate or ‘manos’. If you are lucky, then you may be able to watch and purchase the fresh fish, netted at this point. There is a need to educate the younger generation about the value of these ancient inclusions, without tampering with Mother Nature.

Initially, about 30-35 years ago, and before the National Highway was constructed from Panaji to GMC Bambolim through the khazan lands, the highway passed from near the Old Patto in Panaji to Agassaim ferry via the village of St Cruz. Many a times during heavy monsoons and high tides, the sea water would enter over the khazan areas (tidal lands along the rivers), almost a kilometre inland, and submerge the motorable road. It was then that the conductor of the bus would alight, and walk ahead to show the safe path, as the bus crawled behind. Today the intrusion of water has been controlled, but elderly people do get a reminder of the past, if rains are incessant.

The motorable road traverses the village from Panaji in the North West passing through the Four Pillars and proceeding toward the South, exiting at Bambolim. It is interesting to note that the ward towards the South is known as Cabeça, which in Portuguese language means a ‘head’ or ‘at the top’! Could it be that it was the first component of this village that was accosted by people coming from the ancient port? Or could it be that it was at the ‘top’, – such as a hill? It would be interesting to find out!

After passing through the Four Pillars, the first area that one comes across is the Bondir Ward, where we find a modern football ground, with a mini-stadia and the village post office. It can be confidently acknowledged that the name ‘Bondir’ was born from the corruption of the identity of the ancient port or ‘bundar’ that existed nearby. It was located behind the mansion of Braganza family. Though the writer had seen traces of masonry steps about 12 years ago, today this riverine area is mud-filled and encroached, – taking these steps behind the curtain of time! At one time in Calapurs’ past, almost 50,000 tonnes of sea salt, generated from salt pans around the village, passed through this ‘bundar’, as trade! Today only a lone pillar is seen under a tamarind tree near the ground, and two smaller pillars observed near the site of the dock or wharf. A visit to this place bestows a double joy! The view over the placid waters with a ‘manos’ and fringed with mangrove trees is ethereal; and one can experience the quaint architecture of the tiled Goan houses and balcaoes, when passing through the narrow lane.

From this point, we can see an almost ‘straight road’, which passes Southward from the Bondir area to Annexin Cujira, near the Chapel of St Gonsalo. Possibly during the earlier era, this road carried on straight up the hill and over it to the ancient port of Gopakapattana (Goa Velha), connecting both the ports – one major and the other minor, hence being named as Ubho Dando or ‘straight like a wooden rod’.

The old highway road enters the main village from near the football ground and passes via the new Sri Ganesh Temple to the Church Square. Along this route there are many aspects of heritage value. The first heritage we come across is the Cross Shrine near what is known as ‘Don Fator’!

Right besides the motorable road, we see a shrine, hosting two almost round-rectangular, granite stones of size about three feet in dimension, and of seemingly equal weight. These stones known as ‘Don Fator’ or ‘two stones’, have generated many theories and a local legend. While some theorise that they may have been ‘measuring weights’ used by traders frequenting the ‘bandar’ nearby, other learned individuals state that they may be meteors. Some spiritual minded informed the writer that they are ‘Rakhondars’ or village guarding spirits! But what fascinates a listener is the local legend mentioned in the book ‘Santa Cruz (Calapor): Profile of a village in Goa’!

The legend informs that there was a mellow hearted daughter-in-law in a house hold nearby. It further informs that a neighbour shamelessly kept on borrowing goods and spices from this household. However the mother-in-law became furious when she came to know of this. One day, when the daughter-in-law was about to hand over two balls of tamarind spice to the neighbour, the mother-in-law accosted and questioned her. The daughter-in-law hid the tamarind balls behind her back and when questioned, threw them out of the house, justifying that they were stones. It is said that these tamarind balls turned to these pair of stones, and saved the day for the daughter-in-law! Whatever the factual story behind the appearance and existence of these pair of stones – they always generate a sense of high curiosity amongst visitors!

Just a few paces from this ‘Don Fator’, along the main road, we come across two other amazing aspects, found in this village. One is the majestic mansion of the Pinto family, which resembles a palace, having an aesthetic masonry entry gate; while the other fascinating aspect is also found in their garden. This is a unique, huge and a very rare tree called as the ‘Cannonball Tree’, with a botanical name ‘Couroupita guianensis’. This tree bears round, spherical fruits, looking like ‘cannon balls’, with a wood shell like covering. We can see almost 50-60 fruits, hanging on vine like stems, with size about eight-10 inches in diameter.

This tree, originally introduced from South America, also has a beautiful religious significance, when it arrived and was adopted in India. The flowers are called as ‘naga-champha’ or ‘nagalingam pushpa’ in different places in India, and are most sought after in Shiva temples. The reason is that these flowers show a set of two stamens – one circular ring of stamens, placed at a lower surface, surrounding a central thicker stamen, looking exactly like a Shiv Linga. Furthermore, in the same flower, another set of stamens are seen as the open hood of a cobra, set over this lower, central, ling-like stamen, similar to the mythological open hooded cobra over a Shiv Linga! The first visual of this tree and flower never fails to surprise a visitor.

As we walk a few more steps, towards the Church Square, we come across a priceless vestige of past ‘gaunkari’ system – a ‘dovernem’! This is a rectangular, four feet x three feet, chest-high masonry platform that lies near the tempo hire stand. During the past eras, the mobility of tradesmen was on foot, carrying their goods on their heads, in bamboo baskets. To offer rest to these travelling tradesmen and local agriculturists, the village administration system or ‘gaunkari’ (later codified by Portuguese as ‘communidades’) constructed such chest high or shoulder high masonry platforms at regular intervals, so that these tired travellers could rest their head loads, instead of keeping it lower, on the ground. This would facilitate re-taking the load on their heads, to resume their journey.

One must appreciate the foresight of the village administration, about a decade ago, to preserve this heritage, when on being made aware of the historic importance of this ‘dovornnem’, they raised the platform to its original height, from a totally ruined base. Such preservation is the need of the hour, as much as is the appreciation by the Goan populace and awareness of such rich heritage in our villages.

In the next and last article on this historic village, let us be aware of the other fascinating biodiversity and religious aspects of
this village.