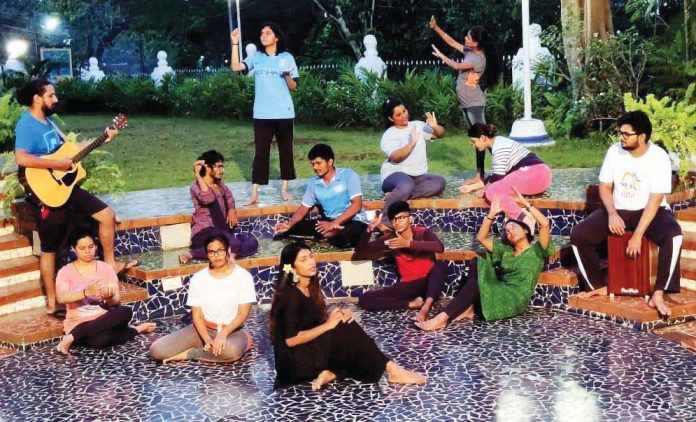 Today, on World Theatre Day, Sunaparanta – Goa Centre for the Arts in association with Abhivyaktee will present a multi-lingual play titled ‘Unmasked’. NT BUZZ gets the details

Theatre group Abhivyaktee will attempt to look behind the masks that we, as humans, wear in a play titled ‘Unmasked’ on March 27, 7 p.m. at Sunaparanta – Goa Centre for the Arts. The play, to be staged on the occasion of World Theatre Day, is a devised production, explains Anagha Deshpande who along with her husband Saish Deshpande started Abhivyaktee in Panaji in 1997.

Devised theatre is a method of theatre production in which the script or performance score originates from collaborative, often improvisatory work by a performing ensemble. “Here, a theme is decided and then a play is created around that theme. After the scenes are improvised and the play is created, the script is devised. So, it’s quite an opposite process of theatre production,” adds Anagha, who is also the project in-charge.

Elaborating on the theme, ‘unmasked’, Anagha states: “We are looking at it at different levels. Unmasking one’s own self – be it emotionally or socially, unmasking religion, relationships. And we are also looking at the physical masks that define the current times.”

Set against the backdrop of the unforeseen pandemic, ‘Unmasked’ will see a series of uncertain events unfold. And as the play progresses, the frailties of human behaviour and relationships begin to unravel. Searching for some kind of truth, the characters embark on an existential quest, looking deeper and taking off on an introspective journey. Antara Bhide who coordinated the spoken word aspect, adds: “The play is basically trying to explore different patterns in human behaviour where we mask and unmask ourselves.”

The play will be held at the amphitheatre, a circular performance space at Sunaparanta that encourages an intimate actor-audience relationship. “We call it theatre-in-round. This year’s production is devised specially for that space,” says Saish.

In the past, the group has staged plays such as ‘Face…Off-Line’ which focused on the impact of social media on the youth; ‘Topsy Turvy Tales’, a modern retelling of classic fairytales; and ‘Yatra…The Journey Within’, an adaptation of Athol Fugard’s ‘The Road to Mecca’. Such performances, says Saish, are intended to make audiences think. “Experimental theatre is thus often open-ended so that audiences can form their own interpretation.”

But while the message is open-ended, the aim is self-introspection, adds Antara. “Every individual needs to find their own answers. The play pushes you to do so. The storyline is non-linear, as is the path of self-exploration. We find ourselves in a loop many a time. But that doesn’t mean we aren’t going anywhere. It’s all part of the journey.”

In the same way, the play begins with the hardships at the beginning of the COVID-19 pandemic and then moves on to individuals and their inner-selves. “We mask and unmask, learn and relearn in attempts to free ourselves from masks that are suffocating us from within,” says Antara, adding that the poems and songs, composed in Hindi and English, are all based on the story. “The poems and songs only express the mood of the situations and encourage characters to be who they are.”

Like every year, this year’s play also involves youngsters – the youngest being 19 years old and the oldest being 26 years old. “Every year, on World Theatre Day, we aim to showcase a play presented, designed, conceptualised, and led by youngsters,” says Anagha, adding that the group has celebrated World Theatre Day with Sunaparanta in this way since 2010.

Rehearsals for the play began in the first week of March. “According to the schedule, we would improvise two scenes per day. After improvising, they were stylised (based on movements, expressions, and mostly to make them seem non-realistic) and later the entire script was finalised,” adds production coordinator Priyanka Verekar, describing the entire experience as a fun process. “Everyone had their vibrant ideas and enthusiasm to give their best. This journey indeed turned out to be a fruitful one because working in a group makes you grow as an individual.”

And this is Abhivyaktee’s primary goal. Theatre is being forgotten in an era where entertainment is so readily available, says Anagha. And hence, she adds, it is projects like these that attract youngsters towards theatre. “By being part of such projects, we hope to give youngsters a chance to understand the strengths and weaknesses within themselves and grow as individuals.”

(Abhivyaktee will present ‘Unmasked’ today, March 27, at 7 p.m. at Sunaparanta – Goa Centre for the Arts. A repeat show will be held at the same venue on March 28, at 7 p.m. Prior registration required. )