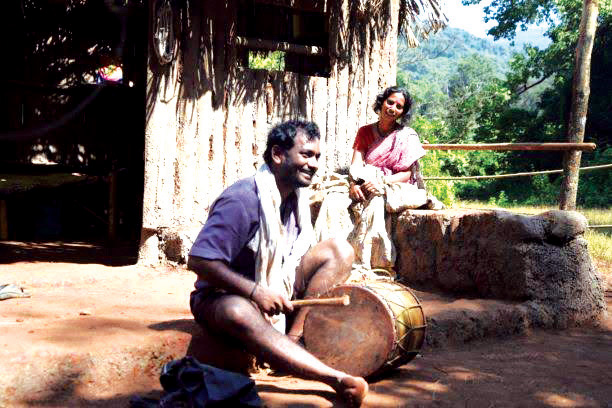 It was a proud moment for Goa recently when Konkani film, ‘Kaajro,’ was awarded National Award for Best Konkani Film at the 67th National Film Awards.

Directed by Nitin Bhaskar, ‘Kaajro’ is a story of Tilgya (Vithal Kaale), belonging to an untouchable caste. When his village is celebrating the annual festival of Dassehra, marking the triumph of Lord Rama over Ravana ie good over bad, Tilgya’s ailing wife, Gokula (Jyoti Bagkar), dies while the celebration is on. Thus, he is not allowed to perform his traditional role of playing a ‘dholuk’ (a local drum) during the ritual and procession, and he is forced to leave the village with his wife’s dead body.

“When we were making this film, we thought of doing something that will have an international appeal. And the subject we were handling is a global issue. It is not just related to Goa or India or developed or under-developed countries. Globally there is discrimination in society in terms of class, caste, colour, etc,” says creative producer of the film, Rajesh Pednekar, adding that he came up with this storyline after reading in the news about a deprived person who was forced to carry his dead wife to the burial ground. “I shared this idea with Prakash Parienkar and then he worked on it and developed this story. I was involved with the storyline right from scratch, the screenplay, and how the scenes are to be shot. I also roped in the best dialogue writer and also I focused on sound and music. The music is mainly through background score as the film has no songs. Also, I didn’t want melody,” explains Pednekar, who is also an actor and has acted in many films.

Speaking further about the story of the film, he maintains that it was not about sensationalising anything but just about presenting a naked truth, which in many ways is universal.

Another interesting aspect of this film is that it is an uncut film. That means that the film was shot without any breaks.

And this had its own set of challenges. “For that, we had to convince the villagers about the process of shooting as we were using the whole village. We had to prepare our actors as it was a continuous shoot. For 20 days we just did rehearsals to get this uncut part. And on the day of the shoot we had to work on coordination between the actors and the camera unit on walky-talkies as there was no mobile network,” says Pednekar.

But, why an uncut film? Pednekar states that the story demanded it.

“When we were working on the story, I felt that a continuous narrative will have an impact to speak about the truth of the society. I wanted to show how the whole scenario changes, minute by minute. And also how in just two hours the whole society can break a family and devastate an individual life,”
he says.

This is Pednekar’s second successive film that has won the national award. His previous film ‘K Sera Sera’ in which he also acted, also won the same award.

So, does he feel the pressure of winning a national award for every film? “No, I don’t feel the pressure. I just do work to the best of my abilities. I just enjoy the process of making films. Success then just follows,” he says.