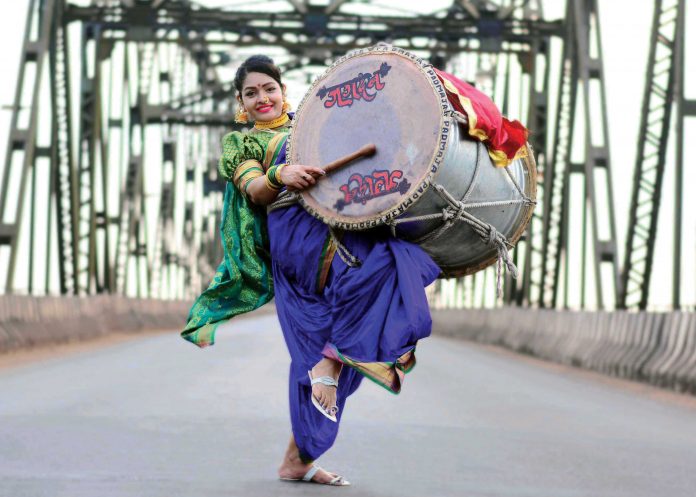 Padmaja Prabhu is all about the swag. Attired in the traditional navari saree, and sporting a pair of sunglasses, the folk musician first broke onto the scene with her dhol at the 2019 Shigmo parade. Since then the music sensation has had the crowds grooving to her beats at every performance. And the musician is now all set to rock the Shigmo parades in Goa as part of the Jagdamb Dhol Tasha Pathak Goa, the state’s first Puneri Dhol Tasha Pathak.

Interestingly though, the lawyer by profession and a ‘dhol vadak’ by passion, grew up in Usgao in a protected traditional household and was kept away from all things that ‘only men were supposed to do’.

But Prabhu was always fascinated with folk instruments and recalls that it was her father who silently let her curiosity unfold. And with her father standing by her, she began classical singing and acting.

“When I started playing the dhol, I faced a lot of criticism as people didn’t appreciate me playing dhol on the streets. But, with all the negative criticism and comments I emerged stronger and more confident,” she laughs. “Over time I got applauded and soon I became a known face as a ‘dhol vadak’ in Goa and
Maharashtra too.”

And Prabhu feels ecstatic when told that she’s probably the first Goan female to be playing the dhol, a feat that was not seen earlier in Puneri dhol. Further, she believes that the dhol tasha industry is achieving new heights with more women joining it. In fact, her group Jagdamb Dhol Tasha Pathak Goa, started by her husband Devdatt Naik in 2017 has over 15 women from Goa who beat the dhol along with her, thus bridging gender disparity that still prevails in religious and cultural customs even today.

“He (Devdatt) always visualised this dream project as a novel idea in Goa. So we both started working on it and learned to play together through workshops that still continue,” says Prabhu, who is grateful to him for coaxing her to go after her dreams of playing a traditional instrument
in public.

Once they decided to take the idea of the troupe further, they learned their compositions from Vikram Karapurkar from Shiroda who was also president of the Mahamaya Aarti Mandal, and a well-known musician and composer of folk and
fusion music.

However, the troupe, she recalls, took two long years to make their presence in public glare. “We did proper research, had discussions with some of the best ‘pathaks’ (groups) from Maharashtra, visited various places and learned from various ‘pathaks’ about the art form. We moved step by step. The head of Mahalakshmi Pathak from Kolhapur, Prashant Nagvekar guided us throughout,” she recalls.

But, Prabhu says, it’s not easy when you’re deterred. Also, getting 50-60 people who shared the same vision was tough. “It was after we performed for Shiv Jayanti in different parts of Goa from Farmagudi to Curchorem and Quepem, that the zeal grew further and the group has stuck together,” she says. “Our members are from various parts of Goa, but it’s the love for this art form and desire to spread the traditional vibe with some twist that
binds us as one.”

All eyes though are always on Prabhu, who sets the mood and ups the tempo during their performances. Her energy is contagious and one wonders how she can beat the dhol around her waist that weighs about 15 kilograms while wearing the traditional Navari. “I was always fascinated with wearing traditional attire. The weight of dhol is nothing now, it was heavy initially, but it’s well balanced and when I’m into a performance, I feel no burden,” she says. And since the Shigmo parade started in the afternoon, Prabhu used sunglasses for the glare of the sun. “But since then it’s become a style statement of our troupe,” she laughs.

Jagdamb is now a sought-after group for performances in Goa, and in Maharashtra too for their Shigmo folk songs and vocals and they also have artists from Maharashtra join them too. “After our performances the crowd gets impressed by our enthusiasm and it’s always girls who come running to us with appreciation and requests to join the troupe,”
says Prabhu.

Collaborations are always exciting, and they’ve also organised several workshops, including one in 2020 on dhol tasha with Swastik Dhol Tasha Pathak from Mumbai,
a famous troupe.

Besides this, under the banner of her NGO Bhau Foundation, she also tries to take up various causes. In fact, the NGO is currently working towards the restoration of the Mardangad Fort in Ponda, which is in a dilapidated condition. “It is the only fort built by Chhatrapati Sambhaji. We have given a detailed presentation to Chief Minister, Pramod Sawant who is supportive of our plan,” says Prabhu. In fact, they’ve met the 13th descendants of the Shivaji, Sambhaji Raje from Kolhapur in Goa who’ve taken interest and will provide
required guidance.