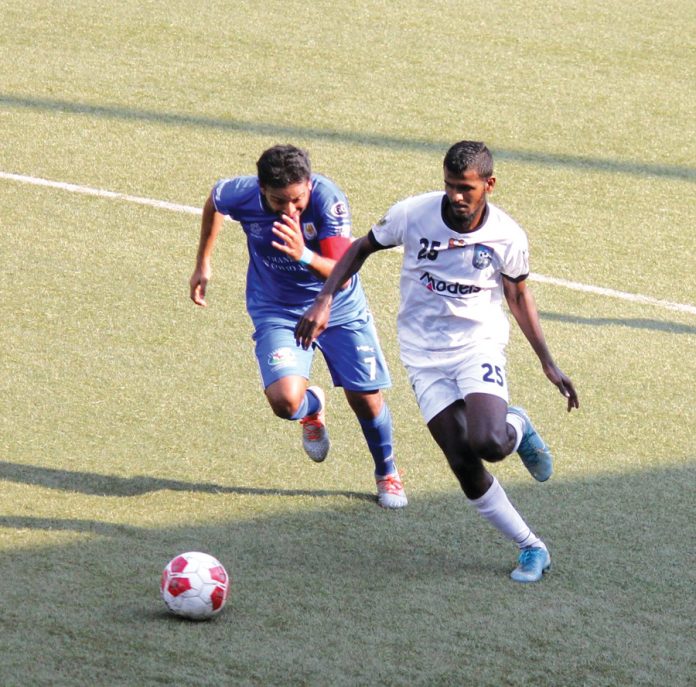 Mapusa: Down by a goal in the first half, Dempo SC made a sensational comeback in the second as they rode on a fine brace by Beevan D’Mello and a goal from substitute Pedro Gonsalves to outshine Panjim Footballers 3-1 in the GFA’s Selvel Goa Professional League at Duler Stadium, Mapusa, on Thursday.

Beevan scored two quick goals in the 56th and 58th minute, while Pedro converted a penalty in the 73rd minute. Earlier in the first half, Panjim Footballers took the lead through Lloyd Cardozo in the 45th minute.

The opening minutes of the game saw the play being restricted to midfield. Dempo SC sounded a warning in the 12th minute from a set-piece. Richard Costa’s corner found Amber Gonsalves, who managed to keep it low in the frame but it took a deflection off a Panjim defender and went out for corner. The resultant corner was cleared by Panjim.

Dempo SC’s Richard Costa forced a save from Preston in following minute when he was set on the right flank with a diagonal pass from Kirtikesh Gadekar.

At the half-hour mark, Dempo SC had a shot at the goal and this time it was Latesh Mandrekar who tried his luck from outside the box. But his shot was easily swallowed by the keeper. Preston then came with another fine save to deny Shallum Pires from a direct free-kick.

Dempo SC nearly took the lead in the 44th minute but Beevan D’Mello’s deft touch to a Darrel Mascarenhas cross missed the side post by inches.

Dempo had another chance in the same minute when Preston failed to collect a pass from Richard and the ball fell to Danstan Fernandes, who had an open goal at his sight but his touch proved too heavy with the ball going in wrong direction.

The Golden Eagles were punished in the next minute with Panjim scoring from their first clear cut chance. It came from a counter attack when Valkmiky Miranda on getting the ball from the goal-kick, made a through-pass to Lloyd, who smashed the ball past Melroy Fernandes to give his side a narrow lead at the break.

Dempo SC made two changes at the restart introducing Pedro Gonsalves and Suraj Hadkonkar in the game. The former almost got an assist when he fed Beevan lone on goal but the lad fired wide from close. Then Richard saw his effort go wasted from close.

But the goal finally arrived in the 56th minute and it came from the boots of Beevan. Richard did the initial work and then played a cut back pass to Beevan, who put the ball at the back of the empty net.

Dempo SC took the lead in the 58th minute and once again it was Beevan who pounced on a rebound after Preston blocked Pedro’s effort from close. Liston Cardozo brought down Beevan outside the box. From the resultant set-piece Pedro Gonsalves, curled in a perfect free-kick at the first post to make it 3-1.