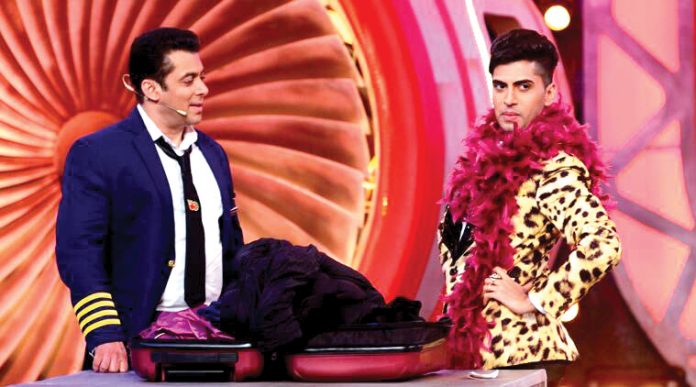 LGBTQ activist and drag queen performer, Sushant Divgikar has been paving the way for unhindered conversations on diversity, inclusivity and gender sensitisation in society. The first drag artiste from India to ever feature in the Forbes 30 Under 30 Asia was in Goa recently. NT BUZZ strikes a conversation

Also known as his drag alter ego Rani Ko-He-Nur, Sushant Divgikar for the past decade has been actively involved with the community by conducting workshops to sensitise people about LGBTQ. Also involved with auditioning, mentoring and training younger drag queens through ‘House Of Ko-He-Nur’, Divgikar is farsighted and aims to make drag a more accessible and acceptable art form in mainstream pop culture. Roped in by several institutes and companies, he discusses equality and equity and supports inclusion and diversity campaigns.

Having crossed over to music in 2019, he made his international debut with ‘Rainbow Riots-House of Wallenberg’ in Sweden and in the same year released the single “I’m Coming Out” during the Stockholm Pride. In 2020 he contributed to the gender-inclusive album ‘Love Duet’, which celebrated the second anniversary of the historic judgement that repealed Section 377 and put the LGBTQIA+ community in the spotlight.

We aren’t even two months into 2021, and he’s now forayed into the Indian music realm with his maiden English pop single titled “Diamond”. The gender-fluid personality, who was a contestant in Bigg Boss, has been campaigning for transgender empowerment through the National Institute of Social Defence (NISD), which is the central advisory body for the Ministry of Social Justice and Empowerment, for a new campaign for transgender empowerment.

By using art to break barriers and embracing his masculine and feminine side, Divgikar inspires people from all over the world to find the courage to live their life fiercely and freely.

Excerpts from an interview:

Q1. What’s your latest single “Diamond” all about?

“Diamond” is about celebrating each and every person’s individual journey and the fact that we all have made it this far even though life has thrown its hurdles at us. Each one of us is a diamond in our own right and the lyrics of this song beautifully articulate the sentiment.

Q2. You’ve been pushing for reforms for your community. What will your work encompass at the National Institute of Social Defence (NISD)?

I was invited by the director of NISD, Veerendra Mishra to discuss a potential collaboration. I can’t share too much, but we have discussed how we can come together to provide equal opportunities and equity to the transgender community in India and how every citizen of this country deserves respect and a life of dignity.

Q. As a drag personality, what is it that you want to express and showcase?

I identify as gender-fluid so drag allows me to wonderfully portray the amalgamation of both male and female energy through my music. Drag in itself is a performance art which has not got its due in such a culturally rich country like India. Therefore, I want to take the Indian drag scene to international levels and make sure everyone around the world knows that India always has been and will always be a force to reckon with when it comes to performance art.

Q. When did you come out as gender-fluid?

It took me 30 years of my life to understand that it is okay to come out as gender-fluid, which falls under the transgender spectrum. I have identified that I am comfortable with the Shiv and Shakti within me. The synergy of both energies makes a complete human, so why should I shy away from what I’m
born with?

I was scared initially because I thought I will not be accepted. A lot of times I also had negative thoughts about myself and my existence. But I read several journals and even our Indian mythology. All that only made me realise that gender fluidity has been a part of our culture for centuries and from time immemorial!

It is the British with their narrow-mindedness that divided us not only on the basis of caste and religion but also gender. They ostracised the LGBTQ community to an extent where we were made to feel like third world people in our own land. This damage needs to be repaired at the earliest and we cannot let this narrow-minded approach flourish in a country like ours, where unity in diversity has been the essence of existence.

Q. What is it to be gender-fluid? There must have been hardships to be who you are. Could you take us through your woes?

Yes. There always have been hardships. Both, externally as well as internally. There was always a conflict within me on whether I should embrace my fluidity or not. Something as basic as which toilet to use becomes a big issue, and that is why we must have gender neutral toilets for transgender people.

Why must we be ridiculed then? Or for that matter when there are queues at airports, why must we choose only male or female queues? There should be queues where people must be allowed to stand in without worrying about being judged. The law of this land has identified the third gender on paper. It is high time to incorporate this into practice and respect people who are non-binary.

Q. What are some of the causes of the LGBTQIA+ community in India that need urgent attention?

I believe that policies should be made to safeguard the rights of LGBTQ individuals. We don’t want special favours but only equal rights. LGBTQ people have always been part of society so this is not some recent phenomenon. People need to live and let live, and love and let love.

Q. There’s a lot of clamping down on free speech. Do you face such issues with expressing yourself, including on social media platforms?

This is true. We are a democratic nation and freedom of speech is a right we hold under the constitution. A lot of times I have seen people not being able to make movies with scripts for transgender people or people from within the LGBTQ community because they’re scared!

But what are we scared of? We are people too! We have lives, families, dreams and aspirations. Why is it so criminal to show us in the mainstream as being part of society? We are also taxpaying citizens of this beautiful country and the least people could do is give us an opportunity.

I just look forward to people being more proactive on this front and hope for a better tomorrow.

On a soul-searching journey