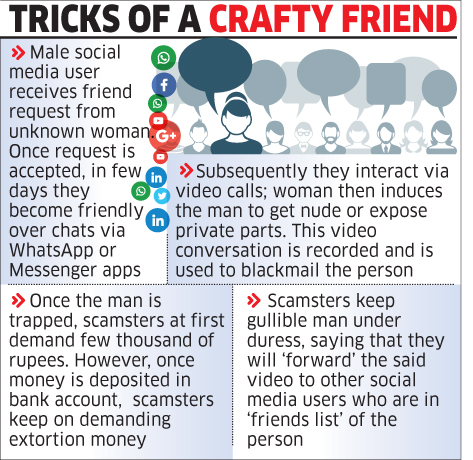 Online scamsters have adopted a new modus operandi to extort   money from gullible men using social media. A steamy video chat is conducted by an unknown woman befriended by a man on social media. This video conversation is recorded and is later used to extort money from the man.

Such blackmailing incidents have taken place in Goa. However, no complaints have been lodged with cyber crime police station, Ribandar, sources said.

Cyber crime police have advised the men not to befriend any unknown woman on social media or engage in video calls with such people.

Throwing light on the modus operandi, police said that a male social media user receives a friend request from an unknown woman. Once the request is accepted, in a few days they become friendly over chats via WhatsApp or Messenger apps.

Subsequently they interact via video calls; the woman then induces the man to get nude or expose private parts. This video conversation is recorded and the same is used to blackmail the person, police explained.

Police said that once the man is trapped, the scamsters at first demand a few thousand of rupees. However,   once the money is deposited in a bank account, the scamsters keep on demanding the extortion money.

The scamsters keep the gullible person under duress, saying that they will ‘forward’ the said video to other social media users who are in the ‘friends list’ of the man.

Cautioning people against accepting such friend requests from unknown people, police also advised them to make aware their friends and others about this emerging trick of the trade.

The citizens have been advised to approach local police or cyber crime police if they are victims of such scams.