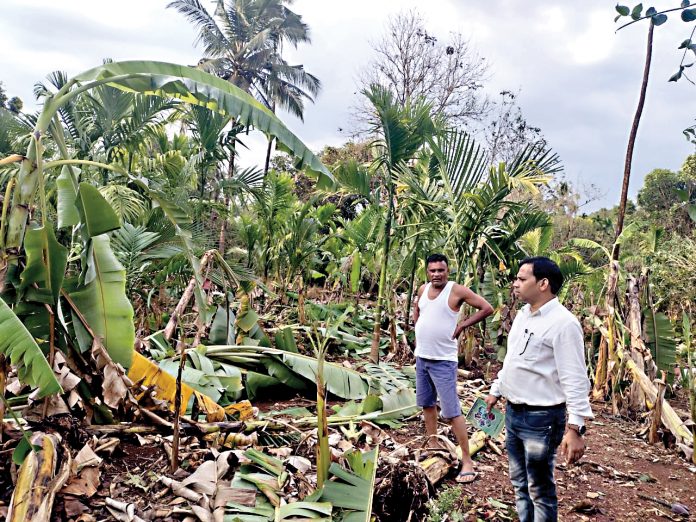 Unseasonal rain accompanied by gusty wind hit crops and houses in Kankirem in the Guleli village panchayat in the Sattari taluka.

According to villagers, more than 20 houses were damaged.

“Roof tiles and tin sheets of several houses were blown away while several trees and electrical poles were uprooted in the village,” said a local from Kankirem.

Kankirem is a settlement of ST community members who depend largely on farming activities. ZAO, Vishwanath Gawas said that plantations of areca nut, coconut, mango, jackfruit and banana were completely damaged.

“According to me, farmers losses are extreme. The situation is really grim. Crops worth Rs10 lakh were damaged in the cyclonic storm that lashed the village today,” said Gawas who visited the village in the evening to take stock of the situation.

According to Valpoi fire station officials, they received a call from Kankirem village stating that due to cyclonic storm many trees got uprooted and the road was totally blocked.

“Five houses of locals  Shivanad Kurtikar, Anand Navelkar, Parvati Gaonkar, Laxmi Gawde and Anil Palkar (who was also injured)  were completely damaged due to the falling of trees. Besides this numerous trees got uprooted along the route to the Kankirem village. It took us more than 6 hours to carry out rescue operation” said sub-officer Anand Gawas.

The firefighters Ashok Naik (driver), Amol Naik (driver), Sandeep Gaonkar, Gokuldas Degvekar, Gangaram Pawane and Somnath Gaonkar were on their toes, clearing the trees in the village till late evening.