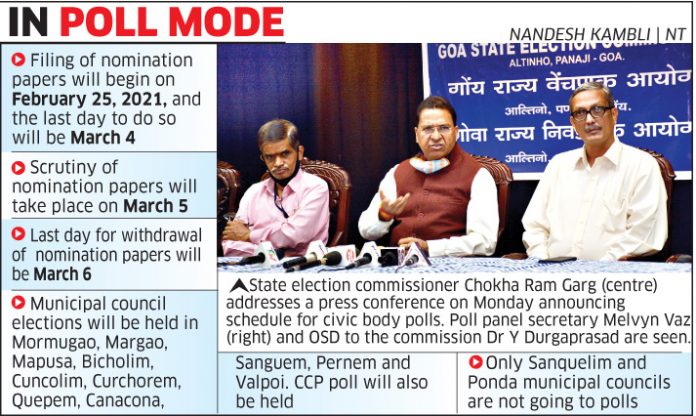 The elections to 11 municipal councils and the Corporation of the City of Panaji will be held on March 20, 2021, the state election commission announced on Monday.

Filing of nomination papers will begin on February 25,  and the last day to do so will be March 4.

Scrutiny of the nomination papers will take place on March 5.

The last day for withdrawal of the nomination papers will be March 6.

Votes will be counted on March 22.

The municipal council elections will be held in Mormugao, Margao, Mapusa, Bicholim, Cuncolim, Curchorem, Quepem, Canacona, Sanguem, Pernem and Valpoi. Only the Sanquelim and Ponda municipal councils are not going to the polls.

Addressing a press conference in Panaji, state election commissioner Chokha Ram Garg said that with the announcement of the elections the model code of conduct has come into force in only those specific areas where the polls are scheduled to take place.

COVID patients will be allowed to cast their vote at the last hour of the polling day by following the guidelines laid down by the concerned authorities.

It is pertinent to note here that the election to the Navelim zilla panchayat constituency, which was countermanded due to the demise of a candidate, by-elections to 22 wards of different village panchayats and also by-elections to ward nine of the Sanquelim municipal council will also be held on March 20, 2021.

A total of 12,334 voters are eligible to cast their vote for the by-polls in  22  wards of various village panchayats and 584 voters for the by-election to ward number nine of the Sanquelim municipal council.

The expenditure includes expenses in rallies, processions and campaign materials used at meetings.

Garg said that poll panel secretary Melvyn Vaz, OSDs to the commission Dr Y Durgaprasad and Ashutosh Apte along with assistant IT director Sagar Gurav will oversee the conduct of the election under his supervision.

Goa’s mining leases valid till 2037: govt in affidavit before SC

4 held for fighting with sword over sand transportation