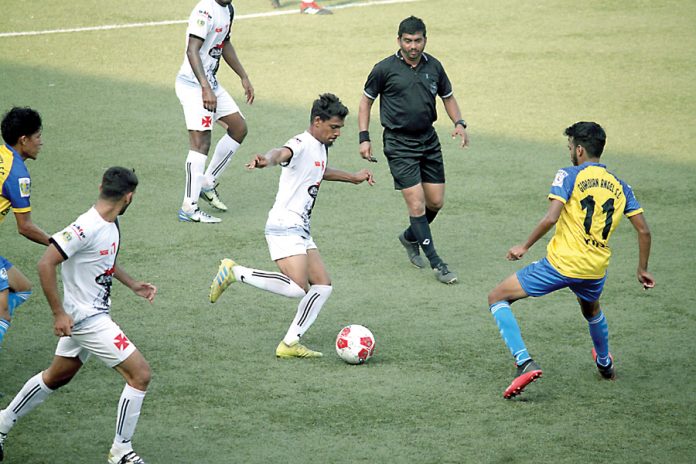 Anil scored a goal in either halves while the Curchorem side weren’t at their best against the Port Towners.

Vasco SC had the first real chance in the game when Anil Gaonkar made space on the right flank and upon entering the box played a cut-back pass to Denil Rebello, who left the ball for an unmarked Desmon Gama. The last named placed the ball at the far post but the Guardian Angel keeper was there to make a fine save.

Vasco SC were up and running throughout the first session. They had better possession than their opponents but their final approach in the opposition’s danger area wasn’t good enough to get the goals.

Guardian Angel SC came close to scoring when they were awarded a freekick outside the box. Gilbert Oliveira’s curler beat the wall but narrowly missed the side post.

The Curchorem side had another chance to take lead when Beneston Barretto worked his way on the right flank and sent a low cross in the box to Mevan Dias and the U20 forward connected brilliantly only to see his effort go wide.

At the other end, Vasco were denied by the crossbar. Francisco Fernandes sent in a cross to an unmarked Desmon Gama, but his open header crashed on to the crossbar and came back into the play. However Vasco SC scored within moments in the 45+4’ when Sanwil D’Costa sent in a cross in the area for Anil Gaonkar, who this time made no mistake in sending the ball at the back of the net.

In the second half Guardian Angel had a great chance to draw level. Gilbert sent in a cross from the right as Basant Singh was waiting in the box. However just before Singh could connect, Kuldeep timed his jump in time to win the ball against the opponent.

James Fernandes came with a goal line clearance when he denied Anil his second from a Denil’s corner.

Vasco SC doubled the lead in the 68th minute and it was Denil who provided an assist to Anil with a good low cross where the last named delightfully headed in to make it 2-0.

Guardian Angel SC Gilbert’s freekick from outside the box was cleanly collected by Sanju Thapa.

They had yet another chance when Gilbert sent a long ball to Mevan, but the U-20 player did everything right except his last effort at goal which was easily dealt by the keeper.