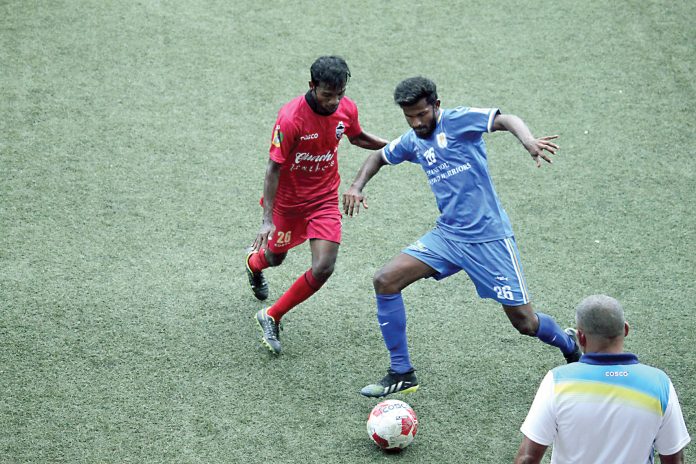 Churchill Brothers FC were a much-improved side having four changes in the team. The Red Machines displayed more organized play.

They nearly equalized when Shallum Pires mistimed his header in a bid to clear the ball. The ball fell to Afdal Varikkodan, whose touch beat the onrushing keeper but Edwin Viegas made a crucial goal line clearance to keep their side’s 1-0 lead intact.

The Red Machines created regular inroads and should have got the equalizer if not for the brilliance from Melroy Fernandes. Churchill’s Mohammed Shahsad found Jouston Barbosa with a neat through pass and the latter took a first time shot, which was brilliantly saved by the keeper Melroy.

Churchill had another miss when Mohammed Shahsad failed to connect to a low cross from the right flank.

However, the Golden Eagles doubled the tally in the 40th minute when Shallum sent in a long free kick which was headed in by Gaurav Vaigankar.

Dempo SC had back to back chances after the restart. On both occasions it was Richard who would have been the provider. In first instance, he bent a perfect corner kick to Gaurav, but this time he failed to direct it in the frame.

Nigel Fernandes squandered a golden opportunity to further inflate the account when he was set through by Richard from right. With the keeper charging on him, Nigel’s lobbed shot narrowly missed the side post.

At the other end, Churchill Brothers FC came with a fine attack using their flank. Jobern Cardozo sent in a cross in the box to an unmarked Ramesh Das, who connected well but his effort was saved by Melroy.

For Dempo, they had yet another chance to add on to their goals. Nigel ran from the half way line and got past his marker upon entering the box, but his poor final shot let him down as it was easily collected by the keeper.

Churchill Brothers were denied late in the game when Rakesh’s free kick crashed on the post.