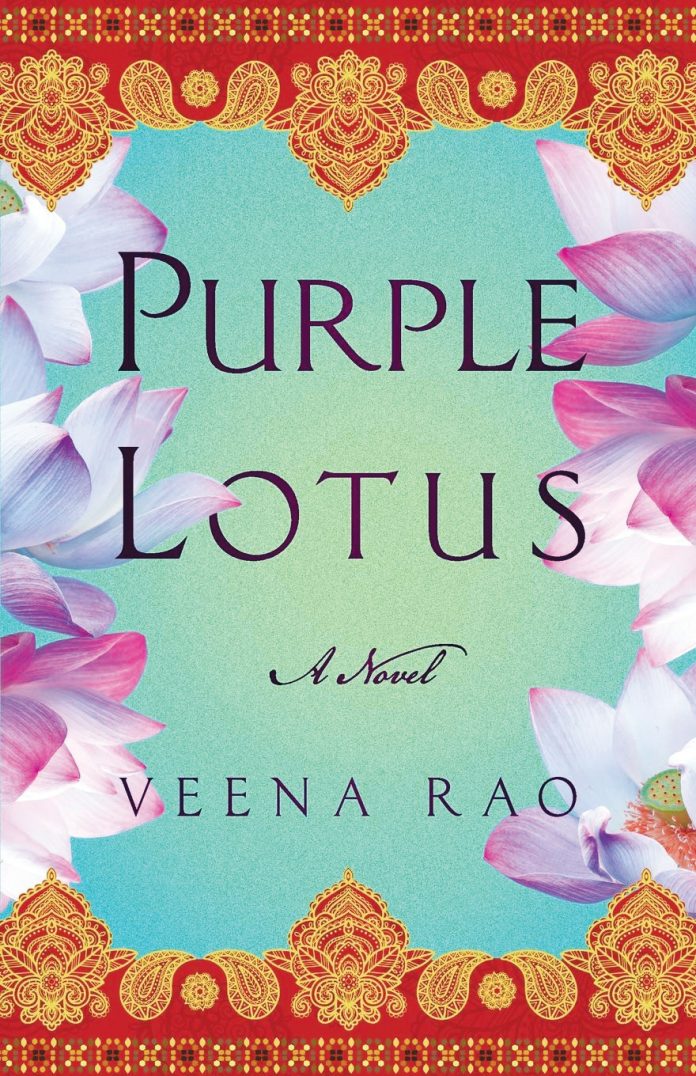 It was 10 years in the writing and breaks stereotypes of what a strong heroine should look like, with a heroine who is introverted, feels inadequate and powerless, and is conditioned to believe she is weak.

“It took me ten years and multiple drafts to write the story because I knew nothing about fiction writing. I don’t have an MFA degree. I have never attended a writing workshop in my life. I am a journalist, but writing news reports isn’t really writing, it is just conveying the news in simple, direct language. So, I had to teach myself to write fiction,” said editor of Atlanta-based community newspaper, NRI Pulse, Veena Rao of her debut novel
‘Purple Lotus’.

“I read books in the immigrant fiction genre over and over again, paying attention to character development, plot progression, style, etc, until I evolved as a fiction writer,” said Rao, who grew up in Mangalore and moved to the US in 2001.

Thus, motivated to write a book of her own and realise her childhood dream, she sat with a blank page and the first thing she typed was the title, ‘Purple Lotus’.

“The lotus is such a beautiful symbol of rising above one’s circumstances. It grows in muddy waters but rises unblemished and beautiful toward the sun. The purple-coloured lotus is considered rare and symbolises self-awakening. I suppose I knew what direction the story would take, but I had no story. Writing ‘Purple Lotus’ was a very long, messy journey where I taught myself to write creatively as the story developed,” Rao said.

Then came the even harder part.

“My manuscript was rejected multiple times over the years. Each time I saw a rejection email, it felt like a personal blow. But even through the bucket loads of rejections, I always held the belief that my book would eventually get published.

“Finally, last year, I entered the She Writes Press STEP manuscript contest that is open annually to women of colour. I forgot about it because I had seen enough rejections to hope for a positive outcome. So, imagine my shock and joy when my publisher informed me that I had won the contest and a book deal.

“And fortunately for me, my novel has resonated with readers after it released this past fall,” Rao said.

Resonated it has since it breaks stereotypes of what a strong heroine should look like, how a feminist narrative should be told.

“Female protagonists these days are feisty. My heroine is introverted, she feels inadequate and powerless, she is conditioned to believe she is weak. I was this woman. My life’s journey has been all about overcoming my own insecurities and confronting my fears. So, it was very important for me to write about a woman who appears weak, fearful, and insecure, but her life’s journey teaches her not only to overcome external obstacles, but also to find her self-worth and believe in her own strength,” Rao elaborated.

Tara, the protagonist, moves to American South three years after her arranged marriage to tech executive Sanjay. Feeling invisible and lonely, Tara finds herself lost in childhood memories that have scarred her for life. When she was eight, her parents had left her behind with her aging grandparents and a schizophrenic uncle in Mangalore, while taking her baby brother with them to create a new life
in Dubai.

Tara’s memories of abandonment mirror her present life of loneliness and escalating abuse at the hands of her husband. She accepts the help of kind-hearted American strangers to stand up to Sanjay, only to be pressured by her patriarchal family to make peace with her circumstances. Then, in a moment of truth, she discovers the importance of self-worth, a revelation that gives her the courage to break free, gently rebuild her life, and even risk being shunned by her community when she marries her childhood love, Cyrus.

Life with Cyrus is beautiful, until old fears come knocking. Ultimately, Tara must face these fears to save her relationship with Cyrus – and to confront the victim-shaming society she was raised within.

Are Tara’s experiences in the novel based on her own?

“When I started to write ‘Purple Lotus,’ I only had the title to work with. So, I put my six-year-old self on a train to Mangalore. That was a trip my family actually made in 1975. But, by the second chapter, Tara had evolved into a separate individual, with a story of her own.

“So, Tara’s story is not autobiographical, but there are certain incidents from my own life that I decided were interesting enough to include in Tara’s story.

“For instance, when I moved to the US, I was terrified of driving. The first five years in this country, I relied on others to take me around. I failed the driving test six times. When I finally got my driver’s license on my seventh attempt, a friend helped me find a beat-up car at a pawn shop. I took it home for $650,”
Rao said.

Her two-door Mitsubishi Lancer helped her hone her driving skills in the back roads of Atlanta. She got on the busy Interstate for the first time to get to the printing press 30 miles away to load up the car with crisp copies of the first issue of “NRI Pulse”. It was like driving to the top of Mount Everest!

“I included my driving story in ‘Purple Lotus’ because it’s a good metaphor for a new immigrant’s life of starting afresh, failing, struggling and overcoming odds to survive,”
Rao said.

Speaking about the challenges of running a community newspaper, Rao said NRI Pulse came about on an impulse.

“A friend had suggested that the community needs a newspaper. I woke up one morning and decided that I would be the one to fill this need. I didn’t have a business plan or capital – just a deep belief that I could do it. I had the necessary skills and prior experience as a journalist. Sitting in my living room, it seemed like an easy thing to do. And I did have beginner’s luck. Everything went beautifully. The newspaper had tremendous support from advertisers and the community. But it lasted about a year. A free newspaper depends 100 per cent on advertising revenue. After the recession hit in 2008, getting advertisers was a major task. Very few businesses were doing well. Most businesses did not have a budget for advertising. Bringing each issue out was a major challenge. I ran the newspaper on a shoestring budget. I did most of the work myself – news gathering, editing, design, layout, newspaper delivery, etc. I made personal sacrifices,” Rao said.

Life wasn’t easy, but at the back of her head, she had this “simple childlike belief in the success of the newspaper, and it stayed”.

“The first payoff for all my hard work and persistence came in 2010 when I was featured in the Limca Book of Records as the first Indian woman to edit and publish a newspaper outside India. The Limca recognition immediately raised the newspaper’s profile in the community and helped establish its brand name. Today, we are the number one news source for the community in the region. And I have a wonderful core team of women who believe in our publication and its goals as much as I do,” Rao said.

Swami Vivekanand once said: “Arise, awake, and stop not till the goal is reached.” One thing is for sure: In Rao’s case, she isn’t stopping anytime soon!