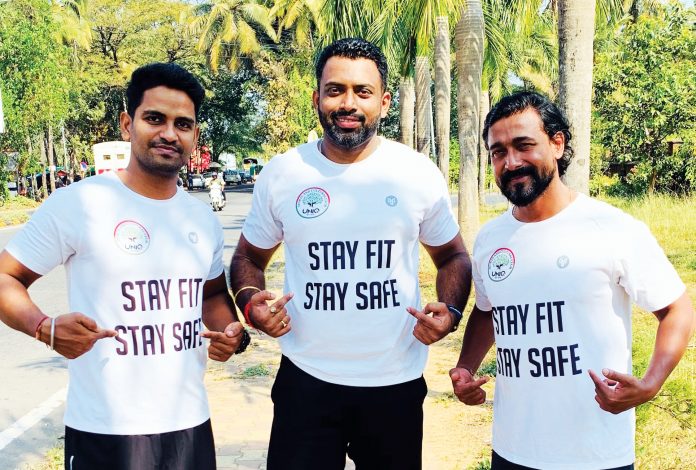 Three buddies, Raghvendra Pagui, Nelson Thomas, and Basavraj Ran, recently set out to run 38 kilometres non-stop from Porvorim to Margao to create awareness about COVID-19 and to promote fitness. The three have some ‘gyan’ to give Goans

There are friendship goals and then there are also goals set to foster friendship. Three friends Raghavendra Pagui, 34, Nelson Thomas, 42, and Basavraj Ran, 29 while chit-chatting on February 1 were discussing COVID, the vaccine, and more, when Thomas, an electrical engineer by profession, who also enjoys running and cycling, mentioned how despite being stuck in New Zealand for almost four months during the lockdown, he and his daughter continued their fitness activities.

And within minutes, the plan was made – Run to advocate the idea of ‘Stay Fit, Stay Safe’.

The virus, says Pagui, who is involved in social work, had Goans running scared during the lockdown months. “All activity had stopped. People were scared to work out, move about, and forgotten about their health. They were worried of the virus, and now about the vaccine that has so much uncertainty that comes with it,” he says.

And so a 12-day preparation began for a 38-kilometres non-stop run from Porvorim to Margao. They started working on their fitness levels and started taking short running trips from Porvorim to Panaji Bus Stand, then to Merces Junction, then to the Bambolim cross, and twice crossed the Zuari Bridge.

“We invited more friends to join us and had also mentioned this to our Unique Sports and Cultural Club, as we wanted many to be part of this, but people didn’t take us seriously,” laughs police constable Ran, who works with the cyber crime department.

On February 13, the trio started their run at 4 a.m. and the three ran till Margao Bus Stand (38 kilometres in total) till 9:15 a.m. “Initially we thought we would take seven hours, but we knew we would get drained in the sun so we wanted to complete it sooner and we did it,” shares Pagui.

Ran says that the run was enjoyable as the three planned it well and they were happy to see commuters clicking photographs and cheering them up en route. “The most strenuous patch was the uphill run in Verna. But what’s the fun without challenges,”
says Thomas.

With this run, Ran now has suddenly become famous in the police department. Not generally involved with police sports, he has been cycling to various places and this run was the first-of-its-kind for him. “I want to appeal to all the police in the department to take care of their health and work out a bit if they can’t practise a sport or give it a lot of time,” he says.

But not just police, with their slogan, the three want everyone, especially the youth, to get involved in fitness and spend more time in outdoor sports than
on gadgets.

“During our younger days when we were free, we would go outdoors and play. But the scene has changed so much. Young boys today sit and drink in the evenings, or sit with their phones ignoring their health and fitness,” explains Pagui.

Besides, the three believe, it’s time we stopped running after medicines and vaccines and become more conscious of our own bodies. And running, Thomas says, improves the functioning of the lungs and so the more one runs, the better one becomes, and physical activity is a way of boosting immunity. “It’s better than consuming medicines and spending money on doctors,” he says.

Pagui adds that initially everyone takes things lightly until they see results, and they are happy that now people who know them have come out to run on service roads in the evenings.

The three are now hoping that the government starts taking an active part in promoting sports and fitness. “The government on paper supports sports, but look around and you can see that the various associations suffer due to paucity of funds. Players don’t have attire and don’t get allowances to play at Nationals. Sports has the power to shape lives and bring glory to the state, which the government is neglecting completely,” believes Pagui.Thus he says, many are giving up sports and fitness too.

The three of them have several plans and with the support of citizens are hoping to build a healthy and fit lifestyle for themselves and those who join along. With their club, the trio are now planning a run from Porvorim to Patradevi which will be on a larger scale.

“We can’t wait for the government to support us. We ought to move our plans by ourselves if we have the drive,” says Nelson, adding that in due course of time, people will understand the importance of ‘Stay Fit and Stay Safe’, not just during the pandemic, but
at all times.