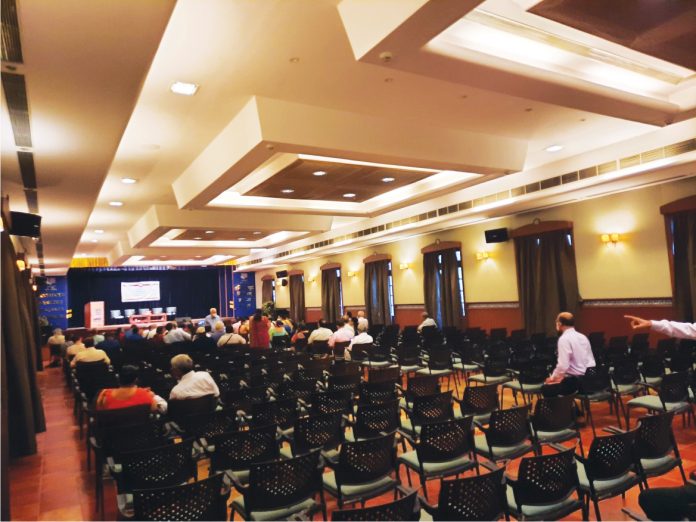 Many a place, used in the past by a myriad of people and organisations, for various felicitations and events has created a niche of a different kind, all over Goa. Margao boasts of the hall opposite ‘Dambabache’ Saal’, which was a temporary residence for Swami Vivekanand in 1890. It is still maintained, with veneration, as it was when he had resided.

Clube Tennis de Gaspar Dias at Miramar and Clube Harmonia at Margao had the honour of hosting the first Prime Minister (Late) Jawaharlal Nehru and his daughter (Late) Indira Gandhi. The list is long! However, one such auditorium or hall, which supersedes most of the places, is the Institute Menezes Braganza Hall at Panaji, at the North East corner of the majestic Collectorate or the Goa Police Headquarters Building.

The open square towards the East of this building, which we know as Azad Maidan, was originally called as ‘Praca da Sete Janelas’ or ‘Square of Seven Windows’. The question is which seven windows, were they referring to? Today, if we stand facing the Police HQ entrance and look towards the left – Government Printing Press corner and towards the right the Institute Menezes Braganza Hall – we can see that a vertical line, differentiates and displays ‘seven windows’ at each corner; so also if we look at the Police HQ entrance, we find that there are three windows on each side of a central square crest area. Initially, till the 1980’s, this building did not have a first floor. It had three parts, having upper floors, each having seven windows. Later in post-Liberation Goa, the first floor was added to house the executive offices of the Goa Police.

Much before the present-day Krishnadas Shama State Central Library was constructed at EDC Complex Pato, to the east of the city, the huge rooms at the base of the north east wing housed the Goa State Central Library which was established in 1832 AD, and is the oldest public library in India. The Central Library, here, was a readers paradise, extremely well maintained by its librarians and staff, and boasted of a massive collection of literary materials and documents, compiling a wealth of literature for research and reference, casual reading and especially for children. Today these huge halls are serving as make-do offices of Directorate of Mines & Industries. Opposite this earlier Central Library, is the Gomantak Maratha Hall, which serves as an exhibition area and a small hall, for hosting literary events. Above these rooms on the ground floor is the historic Institute Menezes Braganza hall.

Approaching the Institute Menezes Braganza Hall, from the road side facing Vidhyut Bhavan (Electricity Department), is a heritage walk by itself. The entrance foyer has a priceless set of six azulejo panels, displaying the epoch-making sea journey of the discovery of the sea route to India, around the Cape of Good Hope, by Vasco da Gama in 1497-98. These azulejo panels each have scores of 6×6 inches porcelain tiles, which were created in Portugal in 1935. They were then shipped to Portuguese Goa and fixed here in 1935-36. Its high quality art never fail to impress a viewer. A bust of Luis de Menezes Braganza, sculpted by Sanjay Harmalkar, the former chairman of Institute Menezes Braganza, presides on the short Italian granite pillar in the center of the entrance foyer.

These huge hall and other offices, on the first floor, used for public and private functions, were originally named as Instituto Vasco da Gama, when it was established on November 24 1871 AD; and this justifies the azulejo panels, displaying the sea journey of Vasco da Gama! This year, on November 24, 2021, it completes 150 years of existence!

After Liberation, in the year 1963, the original name of this hall was reviewed and renamed as Institute Menezes Braganza (IMB), after Luis de Menezes Braganza, a very prominent Goan freedom fighter, who was also a prominent writer, journalist and a staunch anti-colonial activist, from Chandor, Salcete. During his era, he was known as “O Maior de Todos” meaning “The Greatest of all (Goans)”.

Till 1997, it was under the aegis of the Government of Goa and was financed by them. This institution was later re-established as a new society and registered under the Registration of Societies Act 1860. With its objectives stating providing a common platform for literary interactions, organising of symposia and literary festivals and also publishing books and pamphlets, it has collaborations with Indian art institutions such as National Book Trust, New Delhi; Sahitya Academy; Goa Konkani Academy; Gomantak Marathi Academy, Gomantak Sahitya Sevak Mandal; and many others.

There is a public garden to the north of this IMB Hall, which was originally known as Jardim Oliveira Salazar, and its pedestal still survives the vagaries, 60 years after Liberation. This garden too, has been renamed asMenezes Braganza Garden and a bust of this this Goan luminary is erected here. Readers will be surprised that two such similar busts of Luis de Menezes Braganza were cast and still exist in Goa. The other one is found in the Margao Municipal Garden.

Though official events did take place in this hall, prior to Liberation, it gained fame for many events that took place here post-Liberation. Immediately after Liberation, many public meetings and interactions took place here. These official events and public function evenings were attended by the then Military Governor of the liberated Goa, Daman & Diu, Major General Kunhiraman Palat Candeth, as well as other Lt Governors and Chief Ministers of Goa, Daman & Diu.

Many short plays and musical evenings were held here, so was the famous mando festival. Many of the elder generation will remember the anxiety caused, as they stood below this hall, when the paper ballots were counted here, under heavy security during the General Assembly elections. The most important event that took place in this hall was the counting of the polled votes, during the historic Opinion Poll of January 16, 1967, under the personal scrutiny of the Chief Election Commissioner of India KVK Sundaram, on January 18 and 19,, 1967. Goans had voted to stay as a separate unit in the Union of India after Liberation, with 54.7 per cent margin and a difference of 34,021 votes, without merging with Maharashtra or Gujarat.

Institute Menezes Braganza has many affordably priced publications on Goan culture and its arts, researched and written by well known Goan authors, and which can be a collectors dream! A visit to this city-based, yet lesser-known institution is a must.