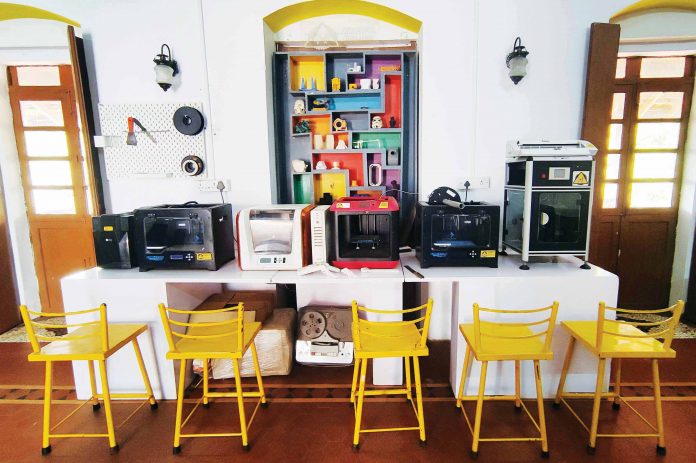 Set in a charming 100-year-old house in Moira,
Maker’s Asylum is a space for people to come together to create, learn, and share tools and ideas. NT BUZZ details

It all began in a garage. In 2013, Vaibhav Chhabra had the idea of getting together a group of like-minded creatives. “We started out of a 250 square feet garage in Bandra, Mumbai. The idea was to share equipment and, in the process, also co-create and collaborate with like-minded makers,” recalls
Chhabra.

Over the last seven years, Maker’s Asylum as it came to be called, moved seven times, growing each time, both, in space and as a community. More equipment and tools were also added as it slowly became a full-fledged workshop where makers could come in and use or learn to use the tools to build their own projects, and also collaborate with others.

In December 2018, they finally found an official address in Mumbai. Two years later they have moved again to Goan shores.

“Over the years while we visited Goa and its beaches, we discovered a very creative community of people who have made the shift to leading a very DIY lifestyle. A lot them are makers and have also moved their creative businesses to this beautiful state, and I think it was always at the back of our minds to explore but we never really found an opportunity,” says Chhabra. The pandemic however helped the team reimagine their personal and professional lives and they decided that Goa made a perfect fit. “We moved a lot of our courses and programmes online and having a physical space in Mumbai with the sky rocketing rents did not make any sense. Hence, we decided to pack up our four truckloads of equipment and move!” he says.

Their new space, located in a charming house in Moira, which threw open its doors on January 31 consists of a full-fledged woodshop, laser cutting machine, 3D printers, metal shop, welding equipment, Virtual Reality gears, Electronics library and CNC machines. “You can think of our space as a gym for tools that can help you make your ideas happen,” says Chhabra, adding that they are looking to diversify into smart textiles, pottery, biotech, and space tech. “We aim to do this by collaborating with the talented community in Goa, of artists, designers, engineers and many more,” he says.

And just as has been in the case in the past, the new Goa space was put together by the team with help from the locals. “People from all over came by to paint the furniture, fix the walls, and do a bunch of chores,” says Chhabra. The space also consists of a small cafe in the backyard called the Drill Press Cafe that has an open stage for upcoming artists and musicians to perform. “So far we have had six musicians who have come and jammed on our open stage and we hope to collaborate more in the areas of education, making, art, food, music and more,” he says.

The space is also getting ready to continue hosting a ton of interesting workshops as they have been doing so over the years, ranging from basics of woodworking, 3D printing, drone making, electronics and robotics, Virtual Reality, IOT, home automation, soldering, to advanced levels of the same skills.

“During the pandemic we also had to reimagine ourselves more digitally so all of these courses and skills are also now available online on our website where we also send hardware to your homes and you can access them remotely as well,” says Chhabra, adding that they have also been hosting a lot of international residencies and programmes over the years to work on solving local problems via the lens of the UN Sustainable Development Goals. “Our programme, the SDG School, brings together interdisciplinary groups from across 25 countries now for which we would love to work with the local government bodies, panchayat and also NGOs/foundations to work in the areas of quality education, healthcare, climate action, responsible consumption and production, and more,” he says. Another programme that they do is called the Innovation School which is focused on portfolio- building for teens where they help youngsters understand the applications of different technologies via project-based learning and then in summer/winter host them at the space to further help them build on their project ideas by introducing them to concepts of design thinking, frugal innovation and rapid prototyping to become conscious problem solvers.

Besides this, the pandemic also saw the team do the M-19 initiative during the lockdown. “It started with a thought of giving only 1000 M-19 shields to the frontline workers. However, in 49 days we were able to activate 42 cities, towns and villages through our open source design and give over one million M-19 face shields through #theM19Collective,” says Chhabra. The collective consisted of over 300 individuals/groups who did not know each other but came together to stand for a common purpose. “The M-19 shields are an ode to the power of collective and truly self-sufficient local ecosystems – a new norm in a post-COVID-19 world. For the true spirit of making in India we are calling them the M-19 Shields (M as a tribute to the maker community and 19 for #COVID-19),” he says.

But while makerspaces are slowly coming up around the country, Chhabra believes that there is still a long way to go for working with hardware to be cool in India. “Even today, conceptually, the purpose of makerspace is something that most people do not understand. Even my relatives and people I know still ask me what I do. I feel it will still take some time to get there, but I think now it is an inflexion point where a lot of independent makerspaces are also coming up in the country, governments have been driving Make in India and so these are positive signs in the direction we are collectively progressing in,” he says. And alternative learning is also becoming something that parents are starting to value today, as parents want a different kind of education for their children. “Traditionally in India, doing work with your hands was always looked down upon, it was meant for a certain class and community. But I think now the more we are moving towards screens, computers etc, the effects of it are clearly resulting in mental health problems in children, and other health issues. So, a lot of parents are realising that creating, making and using your hands inherently adds so much more value, and I am happy that is finally happening in India,” he says.

And looking back, as Maker’s Asylum has evolved, Chhabra has had a lot of important learning right from how to make a company work, how taxes work, how to hire the right people, and more. But of all this, there has been one that has been the most important.

“We had no money, no space, no tools when we started Maker’s Asylum,” he says. “But what I have learned is that if you want to make your idea happen you need to start somewhere and keep at it.”