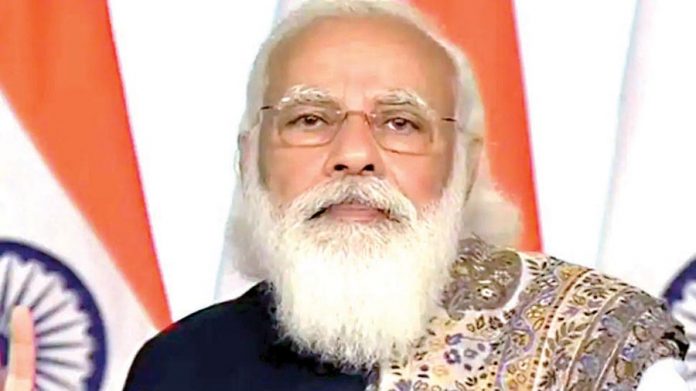 New Delhi: On a day when petrol crossed the Rs 100 mark, Prime Minister Narendra Modi on Wednesday said the middle-class would not have been burdened if the previous governments had focused on reducing India’s energy import dependence.

Without referring to the relentless increase in retail fuel prices, which are linked to international rates, he said India imported over 85 per cent of its oil needs in the 2019-20 financial year and 53 per cent of its gas requirement.

“Can a diverse and talented nation like ours be so energy import dependent?” he asked, addressing an online event to inaugurate oil and gas projects in poll-bound Tamil Nadu.

“I do not want to criticise anyone but I want to say (that) had we focused on this subject much earlier, our middle-class would not be burdened,” he said.

Price of petrol crossed the Rs 100 per litre mark in Rajasthan after fuel rates were hiked for the ninth day in a row. Since India imports the majority of its oil needs, retail rates are benchmarked to international prices, which have spiraled in recent weeks.

Opposition parties including Congress have criticised the price hikes, blaming it on the Modi government raising taxes to scoop out the benefit that arose from international oil rates plunging to a two-decade low in April/May last year. While global rates have rebounded with pick up in demand, the government has not restored the taxes, which are at a record high.

Central and state taxes make up for 60 per cent of the retail selling price of petrol and over 54 per cent of diesel.

The Prime Minister further said it was a collective duty to work towards clean and green sources of energy as well as energy independence.

“Our government is sensitive to the concerns of the middle class. That is why India is now increasing the focus on ethanol to help farmers and consumers,” he said.

Ethanol extracted from sugarcane is being doped in petrol to reduce the requirement of imports. Currently, 8.5 per cent of petrol is ethanol and this proportion is targeted to be raised to 20 per cent by 2025, helping cut imports as well as give farmers an alternate source of income.

India, he said, is looking to cut energy import dependence as well as diversify its sources to reduce risks.

The focus now is also towards using renewable sources of energy, which will by 2030 form 40 per cent of energy generated in the country, he said, listing measures such as increased share of solar power, focus on public transport, switching to LED bulbs, scrappage policy for vehicles and use of solar pumps in irrigation.

“Today, India is increasing the share of energy from renewable sources. By 2030, 40 per cent of all energy will be generated from green energy sources,” he said.

Manufacturing output to increase by US$ 520 bn in 5 yrs: PM

UP farmers to be linked to food processing units